Engineers at Caltech have developed an approach for quantum storage that could help pave the way for the development of large-scale optical quantum networks.

The new system relies on nuclear spins—the angular momentum of an atom's nucleus—oscillating collectively as a spin wave. This collective oscillation effectively chains up several atoms to store information.

The work, which is described in a paper published on February 16 in the journal Nature, utilizes a quantum bit (or qubit) made from an ion of ytterbium (Yb), a rare earth element also used in lasers. The team, led by Andrei Faraon (BS '04), professor of applied physics and electrical engineering, embedded the ion in a transparent crystal of yttrium orthovanadate (YVO4) and manipulated its quantum states via a combination of optical and microwave fields. The team then used the Yb qubit to control the nuclear spin states of multiple surrounding vanadium atoms in the crystal.

"Based on our previous work, single ytterbium ions were known to be excellent candidates for optical quantum networks, but we needed to link them with additional atoms. We demonstrate that in this work," says Faraon, the co-corresponding author of the Nature paper.

The device was fabricated at the Kavli Nanoscience Institute at Caltech, and then tested at very low temperatures in Faraon's lab.

A new technique to utilize entangled nuclear spins as a quantum memory was inspired by methods used in nuclear magnetic resonance (NMR).

"To store quantum information in nuclear spins, we developed new techniques similar to those employed in NMR machines used in hospitals," says Joonhee Choi, a postdoctoral fellow at Caltech and co-corresponding author of the paper. "The main challenge was to adapt existing techniques to work in the absence of a magnetic field."

A unique feature of this system is the pre-determined placement of vanadium atoms around the ytterbium qubit as prescribed by the crystal lattice. Every qubit the team measured had an identical memory register, meaning it would store the same information.

"The ability to build a technology reproducibly and reliably is key to its success," says graduate student Andrei Ruskuc, first author of the paper. "In the scientific context, this let us gain unprecedented insight into microscopic interactions between ytterbium qubits and the vanadium atoms in their environment."

This research is part of a broader effort by Faraon's lab to lay the foundation for future quantum networks.

Quantum networks would connect quantum computers through a system that operates at a quantum, rather than classical, level. In theory, quantum computers will one day be able to perform certain functions faster than classical computers by taking advantage of the special properties of quantum mechanics, including superposition, which allows quantum bits to store information as a 1 and a 0 simultaneously.

As they can with classical computers, engineers would like to be able to connect multiple quantum computers to share data and work together—creating a "quantum internet." This would open the door to several applications, including the ability to solve computations that are too large to be handled by a single quantum computer, as well as the establishment of unbreakably secure communications using quantum cryptography.

The paper is titled "Nuclear spin-wave quantum register for a solid-state qubit." Co-authors include graduate students Chun-Ju Wu and Jake Rochman (MS '19). This research was funded by the Institute of Quantum Information and Matter (IQIM), a National Science Foundation Physics Frontiers Center, with support from the Gordon and Betty Moore Foundation, the Office of Naval Research, the Air Force Office of Scientific Research, Northrop Grumman, General Atomics, and the Weston Havens Foundation. 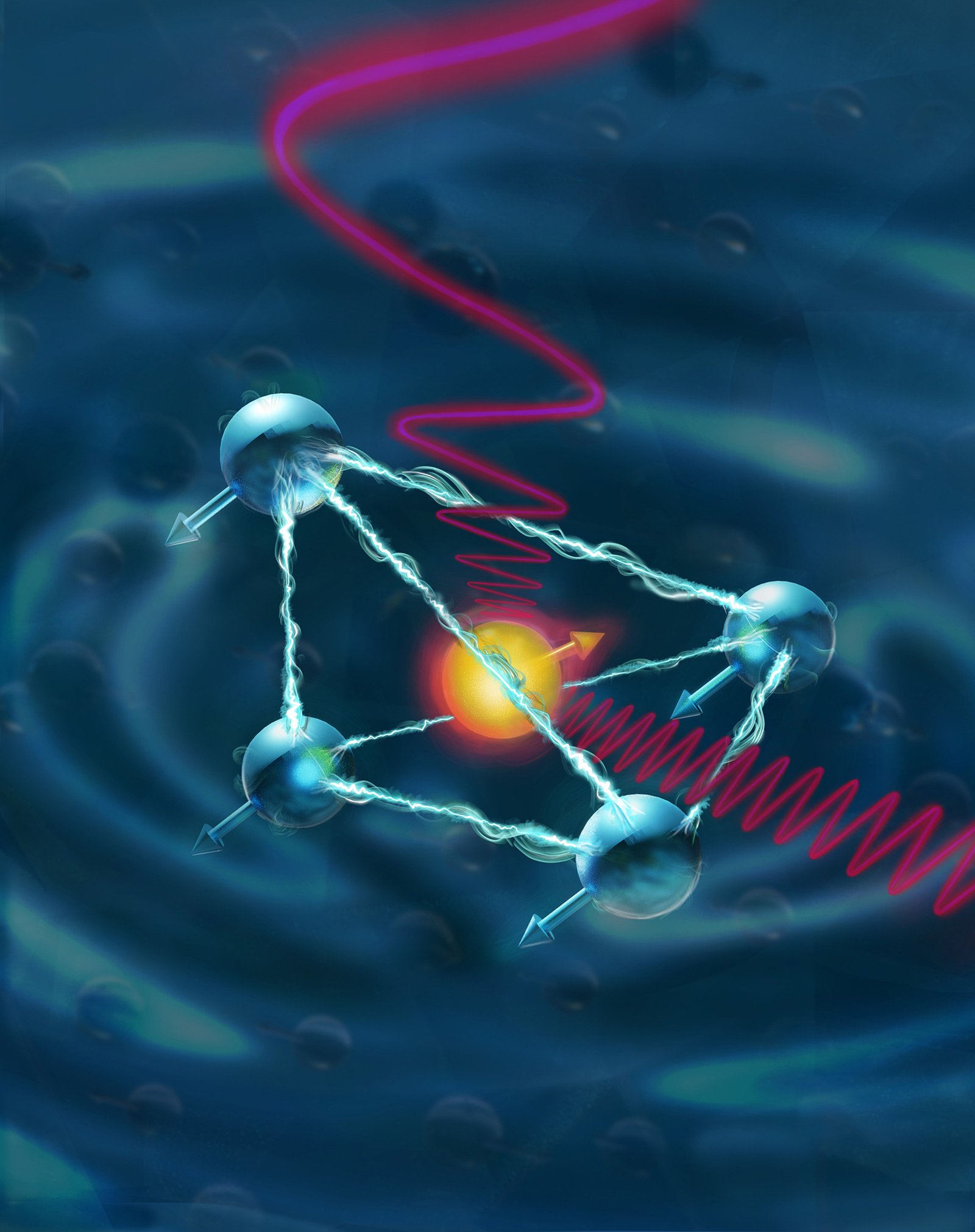 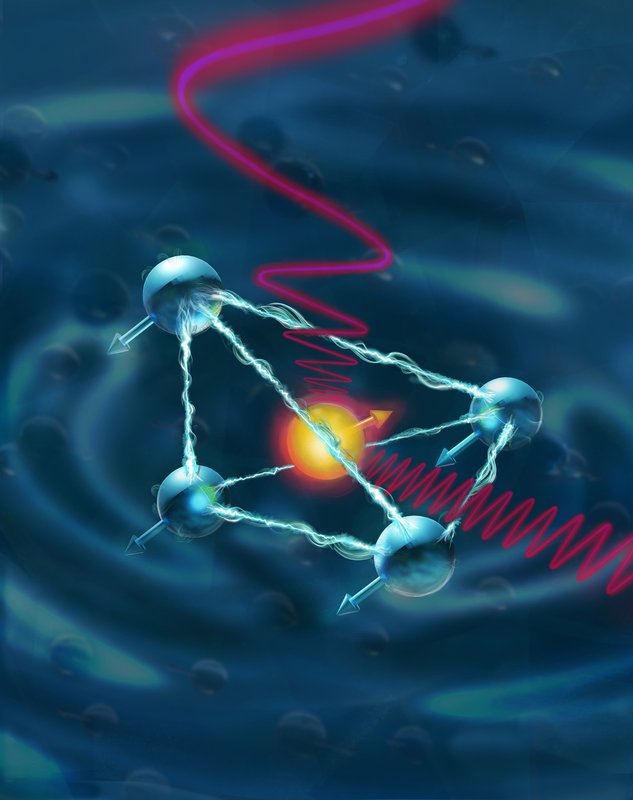 Artist's illustration depicts the quantum spin of an ytterbium ion with the surrounding yttrium orthovanadate crystal. The spin states of the atoms can be used as a processing unit (like transistors on a computer chip). By using the ytterbium to control four vanadium atoms simultaneously, the engineers were able to realize a 2-qubit processor, an important building block in the development of quantum computers and quantum networks.