Ceramics Don't Have To Be Brittle

Imagine a balloon that could float without using any lighter-than-air gas. Instead, it could simply have all of its air sucked out while maintaining its filled shape. Such a vacuum balloon, which could help ease the world's current shortage of helium, can only be made if a new material existed that was strong enough to sustain the pressure generated by forcing out all that air while still being lightweight and flexible.

Caltech materials scientist Julia Greer and her colleagues are on the path to developing such a material and many others that possess unheard-of combinations of properties. For example, they might create a material that is thermally insulating but also extremely lightweight, or one that is simultaneously strong, lightweight, and nonbreakable—properties that are generally thought to be mutually exclusive.

Greer's team has developed a method for constructing new structural materials by taking advantage of the unusual properties that solids can have at the nanometer scale, where features are measured in billionths of meters. In a paper published in the September 12 issue of the journal Science, the Caltech researchers explain how they used the method to produce a ceramic (e.g., a piece of chalk or a brick) that contains about 99.9 percent air yet is incredibly strong, and that can recover its original shape after being smashed by more than 50 percent.

"Ceramics have always been thought to be heavy and brittle," says Greer, a professor of materials science and mechanics in the Division of Engineering and Applied Science at Caltech. "We're showing that in fact, they don't have to be either. This very clearly demonstrates that if you use the concept of the nanoscale to create structures and then use those nanostructures like LEGO to construct larger materials, you can obtain nearly any set of properties you want. You can create materials by design."

The researchers use a direct laser writing method called two-photon lithography to "write" a three-dimensional pattern in a polymer by allowing a laser beam to crosslink and harden the polymer wherever it is focused. The parts of the polymer that were exposed to the laser remain intact while the rest is dissolved away, revealing a three-dimensional scaffold. That structure can then be coated with a thin layer of just about any kind of material—a metal, an alloy, a glass, a semiconductor, etc. Then the researchers use another method to etch out the polymer from within the structure, leaving a hollow architecture.

The applications of this technique are practically limitless, Greer says. Since pretty much any material can be deposited on the scaffolds, the method could be particularly useful for applications in optics, energy efficiency, and biomedicine. For example, it could be used to reproduce complex structures such as bone, producing a scaffold out of biocompatible materials on which cells could proliferate.

In the latest work, Greer and her students used the technique to produce what they call three-dimensional nanolattices that are formed by a repeating nanoscale pattern. After the patterning step, they coated the polymer scaffold with a ceramic called alumina (i.e., aluminum oxide), producing hollow-tube alumina structures with walls ranging in thickness from 5 to 60 nanometers and tubes from 450 to 1,380 nanometers in diameter.

Greer's team next wanted to test the mechanical properties of the various nanolattices they created. Using two different devices for poking and prodding materials on the nanoscale, they squished, stretched, and otherwise tried to deform the samples to see how they held up.

They found that the alumina structures with a wall thickness of 50 nanometers and a tube diameter of about 1 micron shattered when compressed. That was not surprising given that ceramics, especially those that are porous, are brittle. However, compressing lattices with a lower ratio of wall thickness to tube diameter—where the wall thickness was only 10 nanometers—produced a very different result.

"You deform it, and all of a sudden, it springs back," Greer says. "In some cases, we were able to deform these samples by as much as 85 percent, and they could still recover."

To understand why, consider that most brittle materials such as ceramics, silicon, and glass shatter because they are filled with flaws—imperfections such as small voids and inclusions. The more perfect the material, the less likely you are to find a weak spot where it will fail. Therefore, the researchers hypothesize, when you reduce these structures down to the point where individual walls are only 10 nanometers thick, both the number of flaws and the size of any flaws are kept to a minimum, making the whole structure much less likely to fail.

"One of the benefits of using nanolattices is that you significantly improve the quality of the material because you're using such small dimensions," Greer says. "It's basically as close to an ideal material as you can get, and you get the added benefit of needing only a very small amount of material in making them."

The Greer lab is now aggressively pursuing various ways of scaling up the production of these so-called meta-materials.

The lead author on the paper, "Strong, Lightweight and Recoverable Three-Dimensional Ceramic Nanolattices," is Lucas R. Meza, a graduate student in Greer's lab. Satyajit Das, who was a visiting student researcher at Caltech, is also a coauthor. The work was supported by funding from the Defense Advanced Research Projects Agency and the Institute for Collaborative Biotechnologies. Greer is also on the board of directors of the Kavli Nanoscience Institute at Caltech. 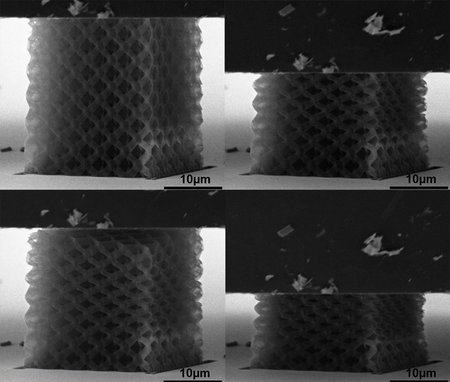 This sequence shows how the Greer Lab's three-dimensional, ceramic nanolattices can recover after being compressed by more than 50 percent. Clockwise, from left to right, an alumina nanolattice before compression, during compression, fully compressed, and recovered following compression. Credit: Lucas Meza/Caltech
Image Lightbox 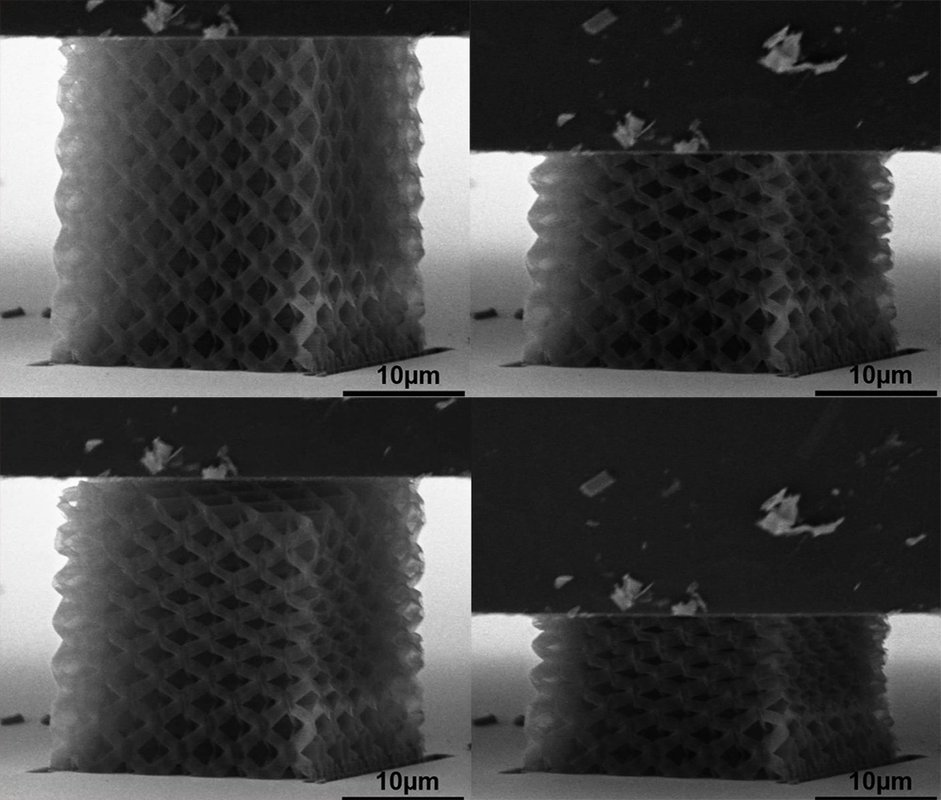 This sequence shows how the Greer Lab's three-dimensional, ceramic nanolattices can recover after being compressed by more than 50 percent. Clockwise, from left to right, an alumina nanolattice before compression, during compression, fully compressed, and recovered following compression.
Credit: Lucas Meza/Caltech
Download Full Image
Subscribe
The Caltech Weekly