A Census of the Soil Microbiome

Many people have experienced the mysterious death of a houseplant. Despite ample water and sunlight, something invisible seems to happen under the soil's surface to sabotage the plant's health. Just as communities of microbes live in the human gut and influence human health, the so-called soil microbiome of bacteria and fungi intimately influences plant health starting at the root.

In our changing climate, a thorough understanding of healthy soil microbiomes will lead to more resilient crops and thus more sustainable food sources. Now, a team led by Caltech researchers has developed a new computational technique for analyzing the DNA present within a soil sample in order to survey the microbial species present. The technique has revealed new insights into the bacterial species that protect plants from pathogenic fungi.

The work was done in the laboratory of Dianne Newman, Gordon M. Binder/Amgen Professor of Biology and Geobiology and executive officer for molecular biology. Newman is the Ecology and Biosphere Engineering Initiative Lead at Caltech's Resnick Sustainability Institute.

"While great strides in understanding the human microbiome have been made over the past decade, our comparative understanding of the soil microbiome lags behind," says Newman. "Yet the soil is a critically important microbial reservoir, given its direct connection to food security, nutrient and water retention, and the global carbon budget."

Led by postdoctoral scholar Daniel Dar, the new study presents a computational algorithm for analyzing DNA from soil and root samples to quantify the abundance of bacteria with specific functional characteristics. The soil microbiome is often referred to as "microbial dark matter," because many of these species cannot easily be cultivated in a laboratory. Thus, taking a sample of soil and attempting to grow the bacteria from it is not a reliable way to determine which species are present. Dar's computational method, combined with techniques for sequencing DNA in an environment, allows microbiologists to survey complex populations of bacteria and fungi present in a sample and to accurately quantify the abundance of members that carry specific genes, such as genes for antibiotics.

In particular, the team was interested in using the method to measure the abundance of certain kinds of bacteria that produce antibiotic and antifungal molecules called phenazines. These bacteria occupy the rhizosphere, a nutrient-rich habitat in the soil surrounding a plant's roots, and the phenazines act as a line of defense against pathogenic microbes, to prevent them from also invading this space. The plant benefits from phenazine-producing bacteria, too, as the roots are protected from infectious, harmful fungi.

To test the accuracy of his computational algorithm, Dar teamed up with collaborators Linda Thomashow and David Weller of the USDA Agricultural Research Service. Thomashow and Weller maintain and carefully monitor experimental wheat plots located near commercial wheat fields in Washington state, and have found that phenazine-producing species called fluorescent pseudomonads are often present in soil that grows healthy plants. The researchers sequenced environmental DNA from these wheat plots and found that Dar's algorithm correctly quantified the abundance of fluorescent pseudomonads, validating the efficacy of this new computational method in the field. But surprisingly, the algorithm also revealed an abundance of different phenazine-producing bacteria, from a group called Streptomyces. This suggests that the protective effects of phenazines in the field could be mediated by multiple species; these species can now be the subject of targeted laboratory experiments.

Next, the team turned to publicly-deposited DNA sequence data sets that had been obtained from hundreds of different soil and plant environments across the globe. These environments included natural and agricultural soils, as well as the root microbiomes of staple crops such as wheat, corn, and sugarcane. The team ran these data sets through their algorithm and discovered that phenazine-producing bacteria are abundant in many environments and, in particular, are enriched in crop-associated microbiomes. The algorithm also revealed another surprise: A certain previously uncharacterized phenazine-producing species called Dyella japonica is abundant among crops, particularly maize.

The team examined Dyella in the laboratory with genomic, genetic, and other experimental techniques to define the type of phenazine it produces, the conditions under which the compound is produced, and the genes involved. Using advanced microscopy, the researchers discovered an intimate relationship betweenDyella and maize; the microorganism is located within the plants' roots rather than on the surface, as is more common among phenazine-producing organisms, and also along the tips of the root hairs where many nutrients for microorganisms are found.

"Understanding the species that make up a healthy soil microbiome could one day help to naturally 'engineer' crop environments to improve crop yield, as a kind of soil probiotic," says Dar. "These findings strengthen the theory that phenazines are important molecules for crop health."

The paper is titled "Global landscape of phenazine biosynthesis and biodegradation reveals species-specific colonization patterns in agricultural soils and crop microbiomes." Dar is the paper's first author. Thomashow, Weller, and Newman are co-authors. Newman is the study's senior corresponding author. Funding was provided by the National Institutes of Health, the Army Research Office, the Rothschild Foundation, EMBO, the Helen Hay Whitney Foundation, and the Division of Geological and Planetary Sciences at Caltech. 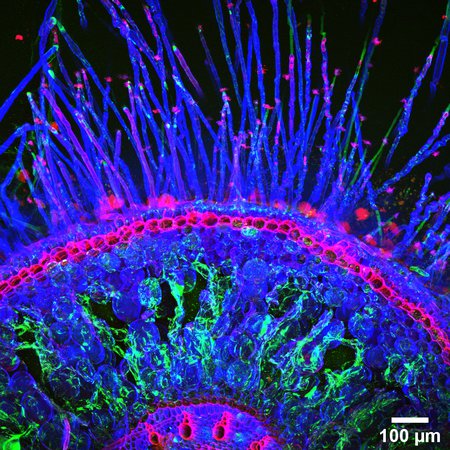