Cells Communicate in a Dynamic Code

Multicellular organisms like ourselves depend on a constant flow of information between cells, coordinating their activities in order to proliferate and differentiate. Deciphering the language of intercellular communication has long been a central challenge in biology. Now, Caltech scientists have discovered that cells have evolved a way to transmit more messages through a single pathway, or communication channel, than previously thought, by encoding the messages rhythmically over time.

The work, conducted in the laboratory of Michael Elowitz, professor of biology and bioengineering, Howard Hughes Medical Institute Investigator, and executive officer for Biological Engineering, is described in a paper in the February 8 issue of Cell.

In particular, the scientists studied a key communication system called "Notch," which is used in nearly every tissue in animals. Malfunctions in the Notch pathway contribute to a variety of cancers and developmental diseases, making it a desirable target to study for drug development.

Cells carry out their conversations using specialized communication molecules called ligands, which interact with corresponding molecular antennae called receptors. When a cell uses the Notch pathway to communicate instructions to its neighbors—telling them to divide, for example, or to differentiate into a different kind of cell—the cell sending the message will produce certain Notch ligands on its surface. These ligands then bind to Notch receptors embedded in the surface of nearby cells, triggering the receptors to release gene-modifying molecules called transcription factors into the interior of their cell. The transcription factors travel to the cell's nucleus, where the cell's DNA is stored, and activate specific genes. The Notch system thus allows cells to receive signals from their neighbors and alter their gene expression accordingly.

Ligands prompt the activation of transcription factors by modifying the structure of the receptors into which they dock. All ligands modify their receptors in a similar way and activate the same transcription factors in a receiving cell, and for that reason, scientists generally assumed that the receiving cell should not be able to reliably determine which ligand had activated it, and hence which message it had received.

"At first glance, the only explanation for how cells distinguish between two ligands, if at all, seems to be that they must somehow accurately detect differences in how strongly the two ligands activate the receptor. However, all evidence so far suggests that, unlike mobile phones or radios, cells have much more trouble precisely analyzing incoming signals," says lead author and former Elowitz lab graduate student Nagarajan (Sandy) Nandagopal (PhD '18). "They are usually excellent at distinguishing between the presence or absence of signal, but not very much more. In this sense, cellular messaging is closer to sending smoke signals than texting. So, the question is, as a cell, how do you differentiate between two ligands, both of which look like similar puffs of smoke in the distance?"

Nandagopal and his collaborators wondered whether the answer lay in the temporal pattern of Notch activation by different ligands—in other words, how the "smoke" is emitted over time. To test this, the team developed a new video-based system through which they could record signaling in real time in each individual cell. By tagging the receptors and ligands with fluorescent protein markers, the team could watch how the molecules interacted as signaling was occurring.

The team studied two chemically similar Notch ligands, dubbed Delta1 and Delta4. They discovered that despite the ligands' similarity the two activated the same receptor with strikingly different temporal patterns. Delta1 ligands activated clusters of receptors simultaneously, sending a sudden burst of transcription factors down to the nucleus all at once, like a smoke signal consisting of a few giant puffs. On the other hand, Delta4 ligands activated individual receptors in a sustained manner, sending a constant trickle of single transcription factors to the nucleus, like a steady stream of smoke.

These two patterns are the key to encoding different instructions to the cell, the researchers say. In fact, this mechanism enabled the two ligands to communicate dramatically different messages. By analyzing chick embryos, the authors discovered that Delta1 activated abdominal muscle production, whereas Delta4 strongly inhibited this process in the same cells.

"Cells speak only a handful of different molecular languages but they have to work together to carry out an incredible diversity of tasks," says Elowitz. "We've generally assumed these languages are extremely simple, and cells can basically only grunt at each other. By watching cells in the process of communicating, we can see that these languages are more sophisticated and have a larger vocabulary than we ever thought. And this is probably just the tip of an iceberg for intercellular communication."

The paper is titled "Dynamic Ligand Discrimination in the Notch Signaling Pathway." In addition to Nandagopal and Elowitz, other Caltech co-authors are Leah Santat, who is also a Howard Hughes Medical Institute Investigator, and Marianne Bronner, the Albert Billings Ruddock Professor of Biology. Additional co-authors are Lauren LeBon of Calico Life Sciences and David Sprinzak of Tel Aviv University. Funding was provided by the Defense Advanced Research Projects Agency, the National Institutes of Health, the National Science Foundation, and the Howard Hughes Medical Institute. 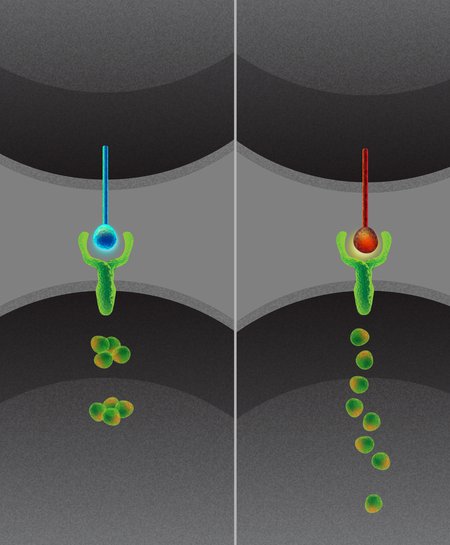 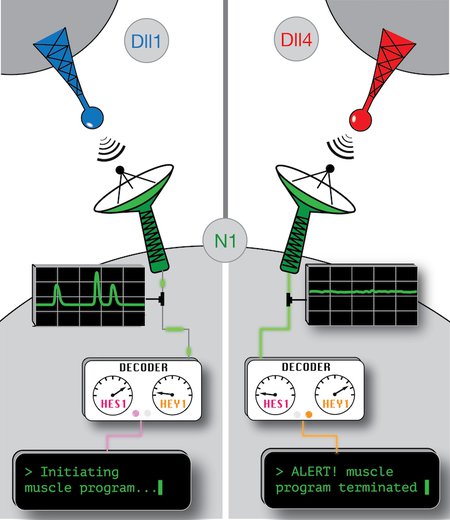 Illustration of a message-receiving cell (bottom) expressing the Notch receptor, depicted as a satellite dish, to receive messages from cells expressing two different ligand "messages", named Delta1 (left, blue) or Delta4 (right, red). The identity of the signaling molecule is encoded in pulsatile (left) or sustained (right) dynamics. These dynamics are in turn "decoded" by a module involving the genes HES1 and HEY1 (white box with dials) to control the cell's decision to differentiate. Credit: Courtesy of the Elowitz laboratory
Image Gallery Lightbox 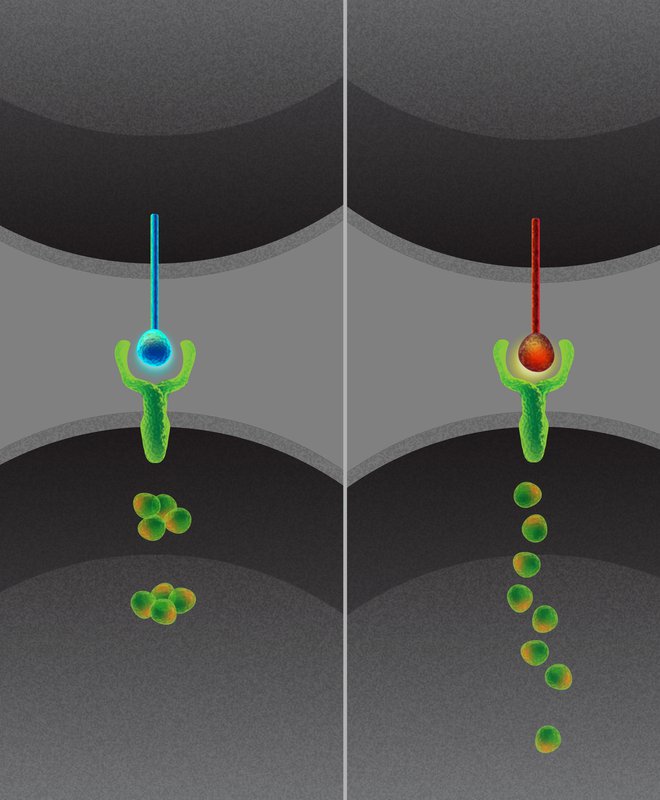 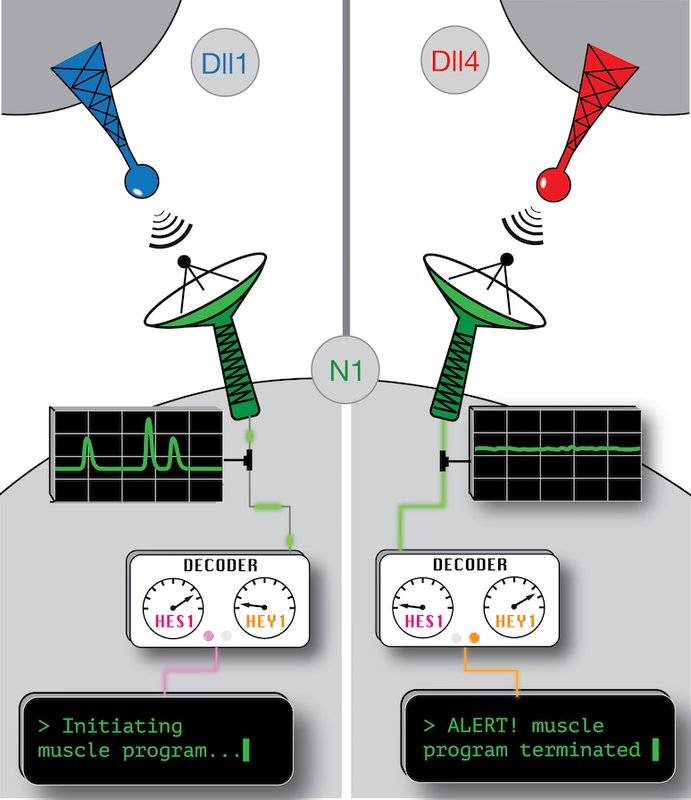 Illustration of a message-receiving cell (bottom) expressing the Notch receptor, depicted as a satellite dish, to receive messages from cells expressing two different ligand "messages", named Delta1 (left, blue) or Delta4 (right, red). The identity of the signaling molecule is encoded in pulsatile (left) or sustained (right) dynamics. These dynamics are in turn "decoded" by a module involving the genes HES1 and HEY1 (white box with dials) to control the cell's decision to differentiate.
Credit: Courtesy of the Elowitz laboratory
Download Full Image