Cancer Treatment in a Painless Patch

Chemotherapy is a life-saving medical intervention for millions of cancer patients, but the treatment is often not a pleasant experience. To kill off cancer cells, chemotherapy drugs must directly enter the patient's bloodstream and so they are administered intravenously. But are large, often painful needles the only reliable way to deliver the drugs?

Caltech senior Teo Wilkening, a mechanical engineering major in the Division of Engineering and Applied Science, spent this past summer testing the preliminary design of an alternative—and possibly much less painful—method: drug delivery through a patch.

Caltech's Mory Gharib, the Hans W. Liepmann Professor of Aeronautics and Bioinspired Engineering, first came up with the idea for the patch several years ago. Gharib's interest in painless drug delivery patches was renewed after a discussion with M. Houman Fekrazad, a cancer specialist at the City of Hope in Duarte, California. When Wilkening joined the Gharib lab in June as part of the Summer Undergraduate Research Fellowships (SURF) program, Gharib encouraged him to come up with a way to design and test the feasibility of such a patch.

"When we started thinking about designing a chemotherapy patch, we split the project into two main parts," Wilkening says. One part is to create a compartment that holds the fluid or medicine; the second is the design of a needle-like device to physically deliver the medicine into the patient's bloodstream. "Over the summer, I started working on the needles," he says.

Any chemotherapy delivery device must provide a way for the drug to get through the skin and into the blood. To avoid the pain caused by the large needle traditionally used for such an intravenous injection, Gharib envisioned a patch containing hundreds of micrometer-scale needles, too small in diameter to be sensed by the nerves in the skin. Wilkening wanted to test how efficiently the tiny needles could actually deliver a drug.

Skin is made of three layers—the epidermal, dermal, and subdermal layers. For a drug to enter the bloodstream, it must be delivered into the bottom, or subdermal, layer. From there, Wilkening explains, "it can be distributed throughout the body, instead of pooling up and killing the cells around the injection site. We wanted to develop a way for the micrometer-scale needles to routinely deliver medicine to this bottom layer."

Wilkening hoped to exploit the fact that each of the three skin layers has a different resistance level. The outer skin layer, the epidermis, is the stiffest of the three; the middle layer, the dermis, is of intermediate stiffness; and the subdermal layer is the easiest to penetrate.

To test how this resistance would affect the flow of a fluid—like a solution carrying a cancer-killing drug—Wilkening created a large-scale model of the microneedles using a pair of microliter glass pipettes. In the model, liquid flows from a common reservoir and into both pipettes at the same rate. To simulate the resistance to flow that would be present in needles in a patch, Wilkening added viscous materials, such as gelatin, to the end of both of the pipettes and then inserted them into separate gels representing the different layers of skin. By varying the stiffness of the gels, he was able to determine the likely behavior of the flow coming from the patch under the condition that one needle penetrates deep enough to the subdermal layer and the other does not. "The liquid flow penetrated through one needle or the other depending on the difference in the stiffness of the skin-like gels, generally through the less stiff one," he says.

Although he spent the majority of his summer perfecting the setup of this experiment and only a little over a week in the actual testing phase, Wilkening's preliminary results suggest that the concept behind the patch is sound. That is, once the fluid meets resistance in one needle, it will follow the path of less resistance and will flow into the other needle. That means that in a patch composed of many hundreds of needles, a drug should be deliverable directly into the subdermal layer and able to reach the patient's bloodstream precisely because it does not as easily flow into the two layers above the subdermis.

While his SURF project is now technically over, Wilkening—who is also a teaching assistant in the mechanical engineering shop and the captain of the Caltech soccer team—says he will be continuing his work with Gharib during the school year.

"I hope to see this project through a little bit more," he says. "In my two previous SURF projects I worked on existing systems. This year was very different because nobody has done this before. It is kind of cool having a chance to own my own project and to use my own inspiration and ideas to really build it up from the bottom." 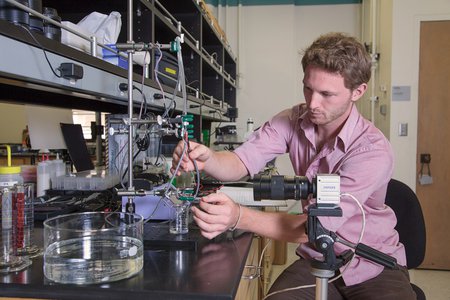 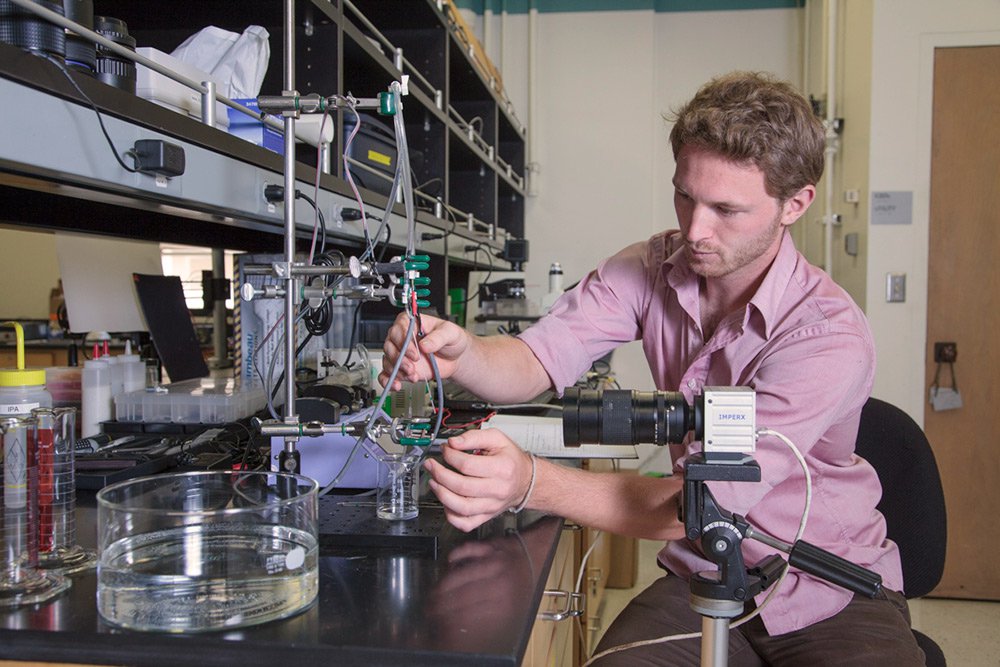