Caltech fluid-mechanics expert John Dabiri has some big plans for a high school in San Pedro, military bases in California, and a small village on Bristol Bay, Alaska—not to mention for the future of wind power generation, in general.

Back in 2009, Dabiri, a professor of aeronautics and bioengineering, was intrigued by the pattern of spinning vortices that trail fish as they swim. Curious, he assigned some graduate students to find out what would happen to a wind farm's power output if its turbines were spaced like those fishy vortices. In simulations, energy production jumped by a factor of 10. To prove that the same effect would occur under real-world conditions, Dabiri and his students established a field site in the California desert with 24 turbines. Data gathered from the site proved that placing turbines in a particular orientation in relation to one another profoundly improves their energy-generating efficiency.

The turbines Dabiri has been investigating aren't the giant pinwheels with blades like propellers—known as horizontal-axis wind turbines (HAWTs)—that most people envision when they think about wind power. Instead, Dabiri's group uses much shorter turbines that look something like egg beaters sticking out of the ground. Dabiri and his colleagues believe that with further development, these so-called vertical-axis wind turbines (VAWTs) could dramatically decrease the cost, footprint, and environmental impact of wind farms.

"We have been able to demonstrate that using wind turbines that are 30 feet tall, as opposed to 300 feet tall, could generate sufficient power for wind-farm applications," Dabiri says. "That's important for us because our approach to getting to lower-cost energy is through the use of smaller vertical-axis wind turbines that are simpler—for example, they have no gearbox and don't need to be pointed in the direction of the oncoming wind—and whose performance can be optimized by arranging them properly."

Even as Dabiri and his group continue to study the physics of the wind as it moves through their wind farm and to develop computer models that will help them to predict optimal configurations for turbines in different areas, they are now beginning several pilot projects to test their concept.

"One of the areas where these smaller turbines can have an immediate impact is in the military," says Dabiri. Indeed, the Department of Defense is one of the largest energy consumers in the country and is interested in using renewable methods to meet some of that need. However, one challenge with the use of wind energy is that large HAWTs can interfere with helicopter operations and radar signatures. Therefore, the Office of Naval Research is funding a three-year project by Dabiri's group to test the smaller VAWTs and to further develop software tools to determine the optimal placement of turbines. "We believe that these smaller turbines provide the opportunity to generate renewable power while being complementary to the ongoing activities at the base," Dabiri says.

A second pilot project, funded by the Los Angeles Unified School District, will create a small wind farm that will help to power a new school while teaching its students about wind power. San Pedro High School's John M. and Muriel Olguin Campus, which opened in August 2012, was designed to be one of the greenest schools ever built, with solar panels, artificial turf, and a solar-heated pool—and the plan has long included the use of wind turbines.

"Here, the challenge is that you have a community nearby, and so if you used the very large horizontal-axis wind turbines, you would have the potential issue of the visual signature, the noise, and so on," Dabiri says. "These smaller turbines will be a demonstration of an alternative that's still able to generate wind energy but in a way that might be more agreeable to these communities."

That is one of the major benefits of VAWTs: being smaller, they fit into a landscape far more seamlessly than would 100-meter-tall horizontal-axis wind turbines. Because VAWTs can also be placed much closer to one another, many more of them can fit within a given area, allowing them to tap into more of the wind energy available in that space than is typically possible. What this all means is that a very productive wind farm can be built that has a lower environmental impact than previously possible.

That is especially appealing in roadless areas such as Alaska's Bristol Bay, located at the eastern edge of the Bering Sea. The villages around the bay—a crucial ecosystem for sockeye salmon—face particular challenges when it comes to meeting their energy needs. The high cost of transporting diesel fuel to the region to generate power creates a significant barrier to sustainable economic development. However, the region also has strong wind resources, and that's where Dabiri comes in.

With funding from the Gordon and Betty Moore Foundation, Dabiri and his group, in collaboration with researchers at the University of Alaska Fairbanks, will be starting a three-year project this summer to asses the performance of a VAWT wind farm in a village called Igiugig. The team will start by testing a few different VAWT designs. Among them is a new polymer rotor, designed by Caltech spinoffs Materia and Scalable Wind Solutions, which may withstand icing better than standard aluminum rotors.

"Once we've figured out which components from which vendors are most effective in that environment, the idea is to expand the project next year, to have maybe a dozen turbines at the site," Dabiri says. "To power the entire village, we'd be talking somewhere in the 50- to 70-turbine range, and all of those could be on an acre or two of land. That's one of the benefits—we're trying to generate the power without changing the landscape. It's pristine, beautiful land. You wouldn't want to completely change the landscape for the sake of producing energy."

Video and images of Dabiri's field site in the California desert can be found at http://dabiri.caltech.edu/research/wind-energy.html.

The Gordon and Betty Moore Foundation, established in 2000, seeks to advance environmental conservation and scientific research around the world and improve the quality of life in the San Francisco Bay Area. The Foundation's Science Program aims to make a significant impact on the development of provocative, transformative scientific research, and increase knowledge in emerging fields. 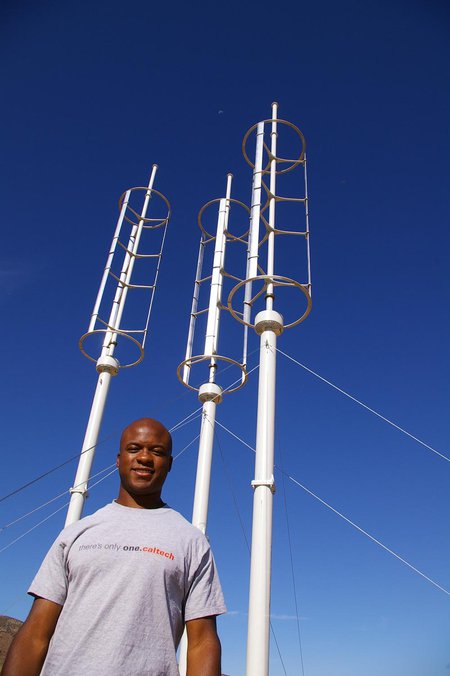 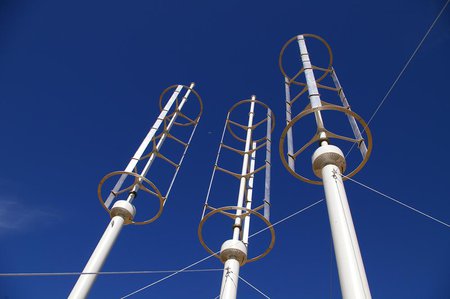 Placing vertical-axis wind turbines in just the right orientation relative to one another profoundly improves their energy-generating efficiency—a concept that soon will be tested in three pilot projects. Credit: Courtesy of John Dabiri
Image Gallery Lightbox 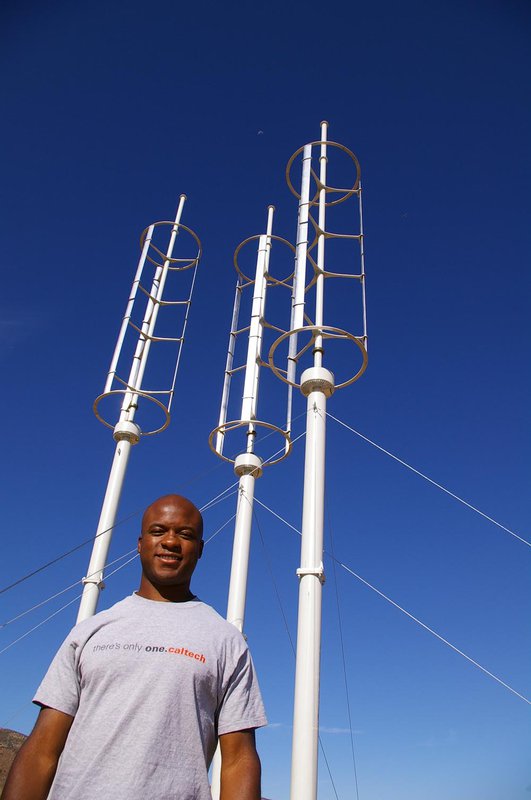 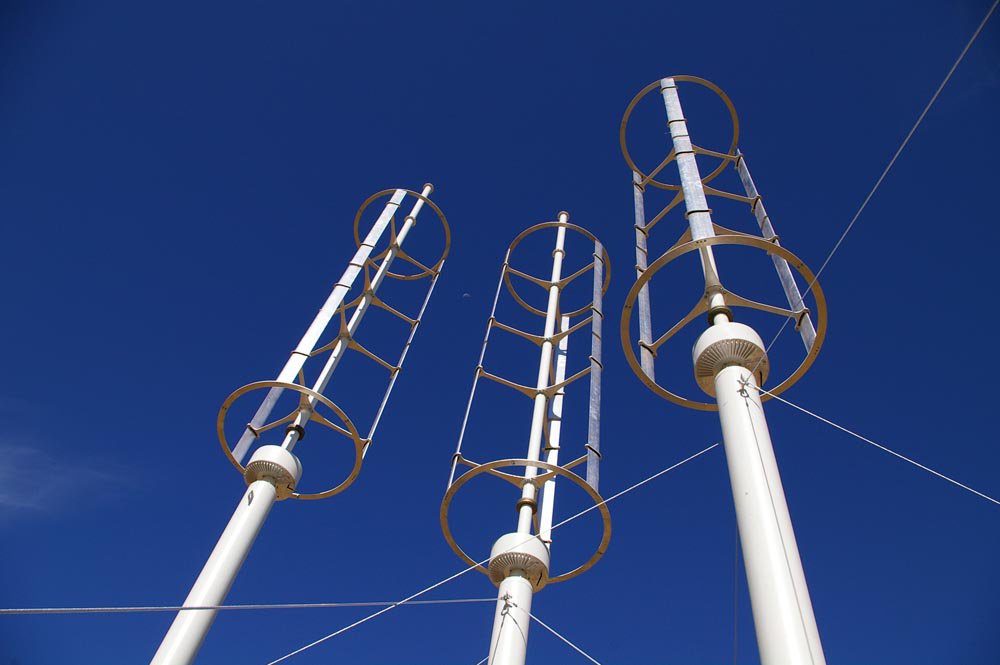 Placing vertical-axis wind turbines in just the right orientation relative to one another profoundly improves their energy-generating efficiency—a concept that soon will be tested in three pilot projects.
Credit: Courtesy of John Dabiri
Download Full Image