More than 2,300 people participated in Caltech's 83rd Annual Seminar Day on May 16 to hear Institute luminaries discuss a range of topics from COVID-19 and sensor technology to the robotic exploration of Mars and historical pandemics.

Presented by the Caltech Alumni Association (CAA), this year's event was the first to be offered virtually, with presenters and attendees interacting through the online teleconferencing service Zoom due to coronavirus restrictions on public events.

"For 83 years, Caltech's Seminar Day has been very popular among alumni," says Ralph Amos, assistant vice president for alumni relations and executive director of the CAA. "Yes, hosting Seminar Day online was a completely new experience for everyone involved. Nonetheless, alumni and the global Caltech community set a new record of attendance to this signature engagement experience, encouraging us to further explore the benefits of virtual alumni engagement."

Ho began the first lecture of the daylong series with a discussion of the origins and biology of the novel coronavirus and its effects on the human body. Describing the virus as a naturally occurring pathogen closely related to a strain found in bats, he noted it can wreak havoc not only on the lungs but also the heart and kidneys, triggering multi-organ failure: features that make it much more dangerous than the flu.

He said that in the United States the infection rate has come down since its peak, but that it is still not under control, making relaxing social distancing restrictions fraught, and adding that with different hot spots dotting the country and the world, "there's a very good chance that this pandemic will persist and become seasonal."

Vaccines, he said, are probably still 18 months away under the best circumstances. That said, worldwide, a "massive mobilization of science to address this pandemic," to develop drugs, antibodies, and tests is now underway. "In my 30-plus years of research, I've never witnessed such a mobilization of scientists to address a single problem," he said.

Emami and Bouman discussed their work on the Sensing to Intelligence initiative, a collaborative, interdisciplinary effort that aims to integrate sensors with artificial intelligence to improve our ability to understand domains such as space and the human body.

Bouman described how her work on computational imaging allows scientists "to take pictures of things that seem invisible to us on first glance."

For example, she noted that a standard camera cannot directly take a picture of a living brain inside the head, so science has turned to MRI scanners that amass indirect measurements and run them through an algorithm to create a suitable image. The same limitation also exists when studying space, she continued, describing how she was part of the Event Horizons Telescope team that used a similar approach to harness an array of international telescopes and process their data to reveal the first-ever image of a black hole.

"This is a domain that can really benefit from a sensing-to-intelligence approach, given the fact that we are dealing with a huge amount of neural data sets," she said.

Emami also discussed work in the lab of Richard A. Andersen, James G. Boswell Professor of Neuroscience and director of the T&C Chen Brain-Machine Interface Center, in which sensors allow a paralyzed human subject to move a robotic arm through intentional thought. Because the current setup is bulky and necessarily constrained to clinical settings, Emami's group aims to create an interface that can be "put under the skin and wirelessly communicate with this robotic arm, and allow the patient to move around freely and operate."

Setting up his presentation about the exploration of Mars, Watkins talked about the history of JPL, American rocket science, and space exploration, noting Caltech's pivotal role in each: "Caltech and NASA DNA are intertwined, and I think that makes us great."

With each mission, he said, JPL "is given a very challenging problem. ‘Please do this thing that's never been done before. We don't know what to expect, [and] there's a huge uncertainty involved.' Most people would be terrified by that problem. I think those are the problems that we salivate over."

He said the Mars 2020 mission, which will launch in July 2020, intends to search for signs of life and sample materials from areas that might have been hospitable to life in the past with the hopes that these could be returned to Earth by a future mission.

The Mars 2020 Perseverance rover is bristling with cameras, sensors, scientific equipment, and an advanced drill: tools designed to detect biosignatures. Watkins added that they were very challenging instruments to develop: "We joke with people, ‘It's not only a super high-precision instrument that makes parts-per-billion-type measurements, it's mounted onto the side of a jackhammer.'"

Summing up, he said, "Mars 2020 is a pivotal mission in our search for life. It could finally answer the age-old question, ‘Are we alone?'"

In the final presentation of the day, Rosenthal discussed the historical interplay between public health and economics during pandemics, with an eye toward lessons that might be valuable during the current COVID-19 outbreak.

Rosenthal, who has studied the economic impact of the Parisian cholera epidemic of the 1830s, noted that, in pandemics, it is often the poor who suffer the most because they tend to live in more crowded homes and neighborhoods, and are consequently more likely to get infected. Additionally, they have fewer financial resources to draw on when their jobs are disrupted because of an outbreak.

Rosenthal discussed the current and future economic disruption resulting from COVID-19, including job losses, decreased spending, decreased demand for goods and services, and whether or how the world's governments and fiscal systems will be able to cope without dramatic changes.

Factors that will affect how long the economy will take to recover will include how society chooses to pay for health care and the development of successful medical interventions to arrest the spread of the disease, he said. "The world of low taxes that we've been living in for a long time is going to have to end as a result of this."

View the videos of each session on the Seminar Day website. 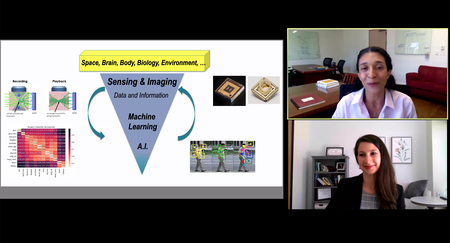