PASADENA, Calif.—A team of scientists led by researchers from the California Institute of Technology (Caltech) and NASA's Jet Propulsion Laboratory (JPL) have fully characterized a key chemical reaction that affects the formation of pollutants in smoggy air. The findings suggest that in the most polluted parts of Los Angeles—and on the most polluted days in those areas—current models are underestimating ozone levels, by between 5 to 10 percent.

The results—published in this week's issue of the journal Science—are likely to have "a small but significant impact on the predictions of computer models used to assess air quality, regulate emissions, and estimate the health impact of air pollution, " says Mitchio Okumura, professor of chemical physics at Caltech and one of the principal investigators on the research.

“This work demonstrates how important accurate laboratory measurements are to our understanding of the atmosphere,” added JPL Senior Research Scientist Stanley P. Sander, who led that team's effort.

The key reaction in question in this research is the reaction between nitrogen dioxide, NO2, and the hydroxyl radical, OH. In the presence of sunlight, these two, along with volatile organic compounds (VOCs), play important roles in the chemical reactions that form ozone.

Until the last decade or so, it was thought that NO2 and OH combine only to make nitric acid, HONO2, a fairly stable molecule with a long lifespan in the atmosphere. "HONO2, or nitric acid, dissolves in rainwater, so that the molecules get washed away," Okumura explains. "It's basically a sink for these radicals, taking them out of the ozone equation and thus slowing down the rate of ozone formation."

Chemists had suspected, however, that a second reaction might occur as well: one that creates a compound called HOONO (pronounced WHO-no), otherwise known as peroxynitrous acid. HOONO is much less stable in the atmosphere, falling apart quickly after being created, and thus releasing the OH and NO2 back for use in the ozone-creation cycle.

But what was not known with any reasonable certainty—until now—is how fast these reactions occur, and how much HONO2 is created relative to the amount of HOONO created. Those relative amounts are known as the branching ratio, so called because OH and NO2 can chemically transform, or branch, into either HONO2 or HOONO.

Enter the Caltech and JPL teams. The JPL team took the lead on measuring the rate at which the OH + NO2 reaction produces both HONO2 and HOONO. They did this using "an advanced chemical reactor built at JPL that was designed to measure reaction rates with very high accuracy," says Sander.

Once the scientists had determined the combined reaction rate for the two possible products—coming up with rates that are on the higher rather than the lower end of the scale of previous estimates—the Caltech group took the lead to try to uncover the branching ratio, or the ratio of the rates of the two separate processes.

Using a powerful laser measurement technique called cavity ringdown spectroscopy, the team was able to detect both products being created in the lab in real time, says Okumura. "We could start the reaction and watch, within microseconds, the products being formed," he says. "That allowed us to measure the species immediately after they were formed, and before they got lost in other side reactions. That is what allowed us to figure out the branching ratio."

Because HOONO was not a well-studied molecule, another key was using state-of-the-art theoretical calculations; for this, the authors enlisted Anne McCoy, professor of chemistry at The Ohio State University. “Solving this atmospheric chemistry problem required us to use many tools from modern chemical physics,” says Okumura.

"This work was the synthesis of two very different and difficult experiments," adds Andrew Mollner, the Science paper's first author and a former Caltech graduate student who is now at the Aerospace Corporation. "While neither experiment in isolation provided definitive results, by combining the two data sets, the parameters needed for air-quality models could be precisely determined."

In the end, what they found was that the loss of OH and NO2 is slower than what was previously thought—although the reactions are fast, fewer of the radicals are going into the nitric acid sink than had been supposed, and more of it is ending up as HOONO. "This means less of the OH and NO2 go away, leading to proportionately more ozone, mostly in polluted areas," Okumura says.

Just how much more? To try to get a handle on how their results might affect predictions of ozone levels, they turned to Robert Harley, professor of environmental engineering at the University of California, Berkeley, and William Carter, a research chemist at the University of California, Riverside—both experts in atmospheric modeling—to look at the ratio's impact on predictions of ozone concentrations in various parts of Los Angeles during the summer of 2010.

The result: "In the most polluted areas of L.A.," says Okumura, "they calculated up to 10 percent more ozone production when they used the new rate for nitric acid formation."

Okumura adds that this strong effect would only occur during the times of the year when it's most polluted, not all year long. Still, he says, considering the significant health hazards ozone can have—recent research has reported that a 10 part-per-billion increase in ozone concentration may lead to a four percent increase in deaths from respiratory causes—any increase in expected ozone levels will be important to "people who regulate emissions and evaluate health risks." The precision of these results reduces the uncertainty in the models—an important step in the ongoing effort to improve the accuracy of the models used by those policymakers.

Okumura believes that this work will cause other scientists to reevaluate recommendations made to modelers as to the best parameters to use. For the team, however, the next step is to start looking at "a wider range of atmospheric conditions where this reaction may also be very important."

Sander agrees. "The present work focused on atmospheric conditions related to urban smog—i.e., relatively warm temperatures and high atmospheric pressure," he says. "But the OH + NO2 reaction is important at many other altitudes. Future work by the two groups will focus on the parts of the atmosphere affected by long-range transport of pollution by high-altitude winds (the middle and upper troposphere) and where ozone depletion from man-made substances is important (the stratosphere)."

In addition to Okumura, Sander, Mollner, McCoy, Harley, and Carter, the other authors on the Science paper, "Rate of Gas Phase Association of Hydroxyl Radical and Nitrogen Dioxide," are postdoctoral fellow Lin Feng and graduate student Matthew Sprague, both from Caltech; former JPL postdoctoral researchers Sivakumaran Valluvadasan, William Bloss, and Daniel Milligan; and postdoctoral fellow Philip Martien from the University of California, Berkeley.

Their work was supported by grants from NASA, the California Air Resources Board, and the National Science Foundation, and by a NASA Earth Systems Science Fellowship and a Department of Defense National Defense Science and Engineering Graduate Fellowship.

JPL is a federally funded research and development facility managed by Caltech for NASA. 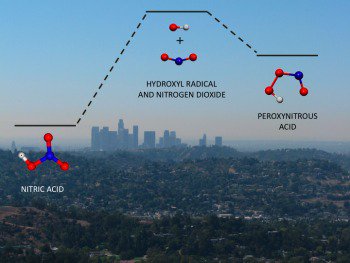 Nitrogen dioxide and the hydroxyl radical combine in the atmosphere to make either nitric acid or peroxynitrous acid; the so-called branching ratio of these two chemicals is important in models of ozone production. Credit: Caltech/Mitchio Okumura
Image Lightbox
Subscribe
The Caltech Weekly