Truck-like robot will be a probe for exploring underground arenas

The SubT Challenge is an international competition sponsored by DARPA to advance technologies to autonomously map, navigate, and search underground environments. Teams earn points by accurately identifying and mapping artifacts that represent items a first responder might find underground: items like a cell phone, backpack, or even a thermal manikin that simulates a survivor.

The August competition, a tunnel-navigation task, was the first of three stages leading up to a final event in August 2021. In the second stage, to be held in Februrary 2020, the team will compete in an urban underground environment; in the third, in August 2020, they move to a cave. Teams that fail to perform well enough in any stage can be disqualified. For the final, the remaining teams will compete in an event that combines all three environments. 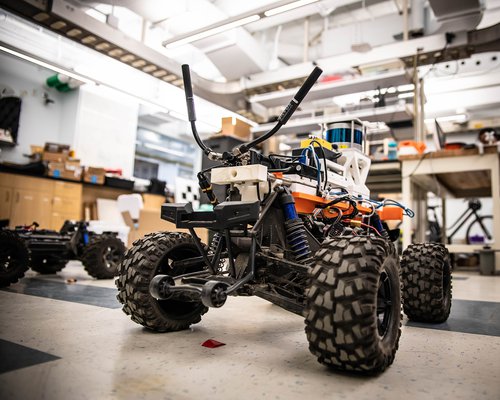 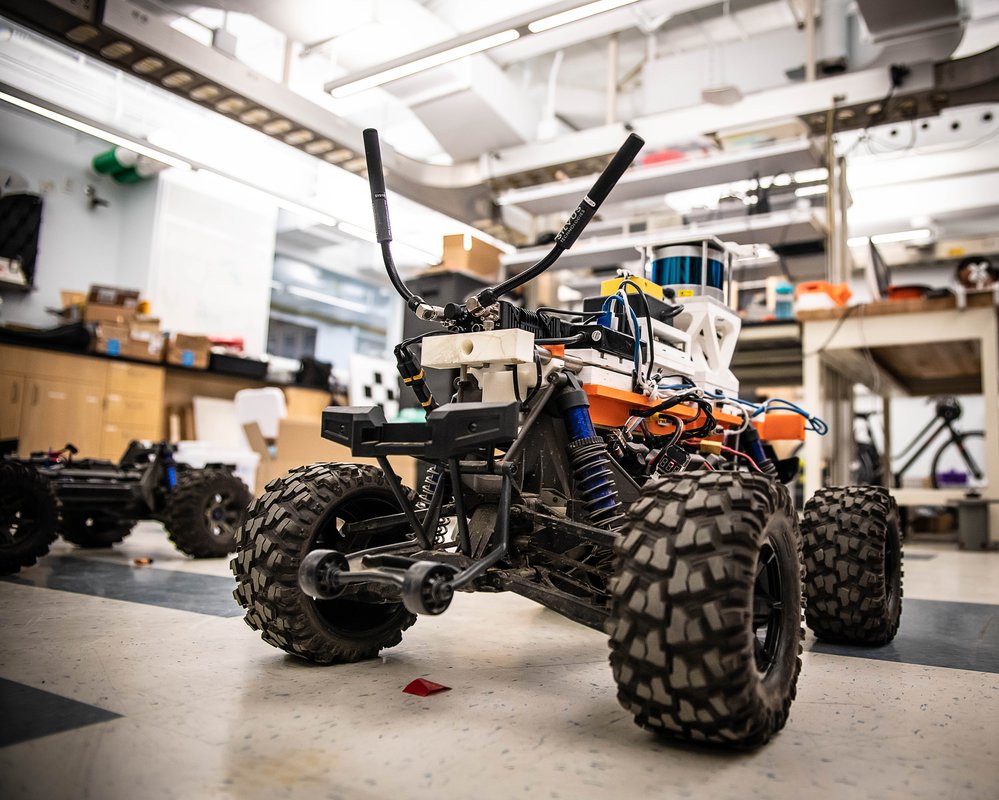 In the tunnel competition, there were 11 teams, most made up of consortia of research institutions and private companies. Team CoSTAR (Collaborative SubTerranean Autonomous Resilient Robots), led by JPL Robotics Technologist Ali Agha, includes JPL, Caltech, MIT, the Korea Advanced Institute of Science and Technology (KAIST), and Sweden's Lulea University of Technology.

Like other teams, CoSTAR has a diverse fleet of different types of robots, including a hybrid rolling/flying robot, a tracked tank-like robot, and small flying drones that can navigate tunnels. The vehicles work together to perform assigned tasks: for example, a ground robot might begin exploration but come to an unnavigable roadblock, at which point a flying drone might be called in to explore beyond the roadblock. The backbone of the CoSTAR fleet is a group of simple, efficient, and reliable truck-like four-wheeled robots called the Huskies.

The newest addition to the fleet, added this summer, looks like the runt of the Husky litter. Dubbed Balto after a famous rescue sled dog, the new robot was built atop a commercial radio control car. Caltech's Joel Burdick, the Richard L. and Dorothy M. Hayman Professor of Mechanical Engineering and Bioengineering and JPL research scientist, and the leader of the Caltech section of the CoSTAR team, decided that using an off-the-shelf R/C car as a base would fast track the development of Balto since the team was able to start with a vehicle that already had a sturdy suspension and powerful electric motor.

Balto is about half the size of the more powerful Huskies, and costs an order of magnitude less. The final product is a vehicle that is about a meter long, weighs about 12 kilograms, and is capable of navigating slopes of up to 40 degrees. Because it is so light, it is also a good deal faster than the Huskies, and can reach speeds of 55 miles per hour. 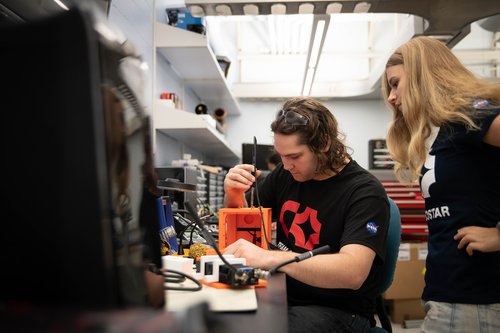 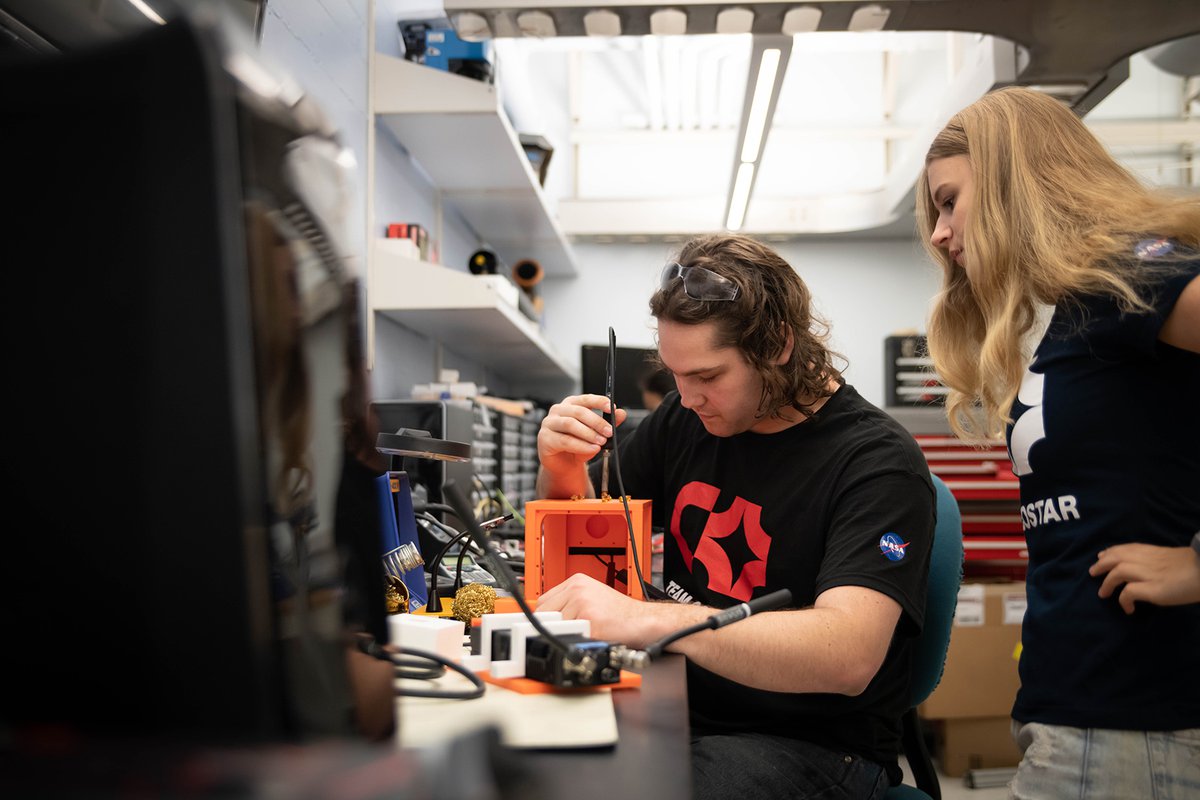 "The idea was to create a ground-based scout," Burdick says. "The drones are our air-based scouts, and Balto is our eyes and ears on the ground. It's light, cheap, and fast. It can get in, find out what's going on, and help us to make decisions about how to proceed." Balto can also fill in as a substitute in emergencies. For example, since wireless signals are often blocked in underground environments, SubT competitors have had to build ad hoc wireless networks by using robots stationed along the tunnel as wireless nodes so that the robots can communicate with one another. If one of the nodes fails, Balto is capable or quickly rushing in to fill in the gap.

Initial work on Balto began in CS/EE/ME 75, Multidisciplinary Systems Engineering, a cross-discipline special projects undergraduate class at Caltech. This spring, a team of about a half-dozen undergraduate students began work on the off-the-shelf car that would become Balto. First, they stripped the body off of the vehicle's chassis and began designing a removable superstructure that would house all of the equipment necessary to transform an R/C car into a self-guided robot explorer. The superstructure of Balto, which was built using milling machines and 3-D printers at Caltech, can be lifted as a single unit off of the chassis. Balto features a towering LIDAR unit (a detection and ranging technology in which the vehicle's surroundings scanned with laser beams) that works in tandem with twin cameras to "see" its surroundings, a radio receiver that allows it to communicate with the rest of the fleet, and an on-board computer that contains the programming that makes the vehicle autonomous.

"The chassis is largely stock, but Balto's electrical and control systems have been entirely replaced," says Jake Ketchum, now a Caltech senior, who led the CS/EE/ME 75 class team and continued to work on Balto through the Summer Undergraduate Research Fellowship (SURF) program.

The team also swapped out the vehicle's simple motor controller to an upgraded version that gives the autonomous guidance system more precise control over the vehicle's speed, which allows them to more accurately place Balto where it is needed.

"Balto was tested in the field and, in the fully autonomous mode, successfully navigated tunnels that were more than 100 meters long," says Alexandra (Sasha) Bodrova, now a Caltech senior who also worked on Balto through the SURF program. "Balto detected and avoided obstacles such as rocks and rails, made sharp turns, and then returned to the starting line, in reverse." 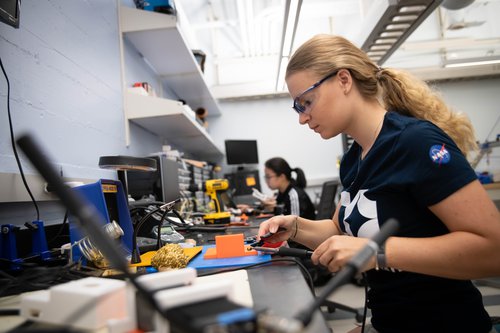 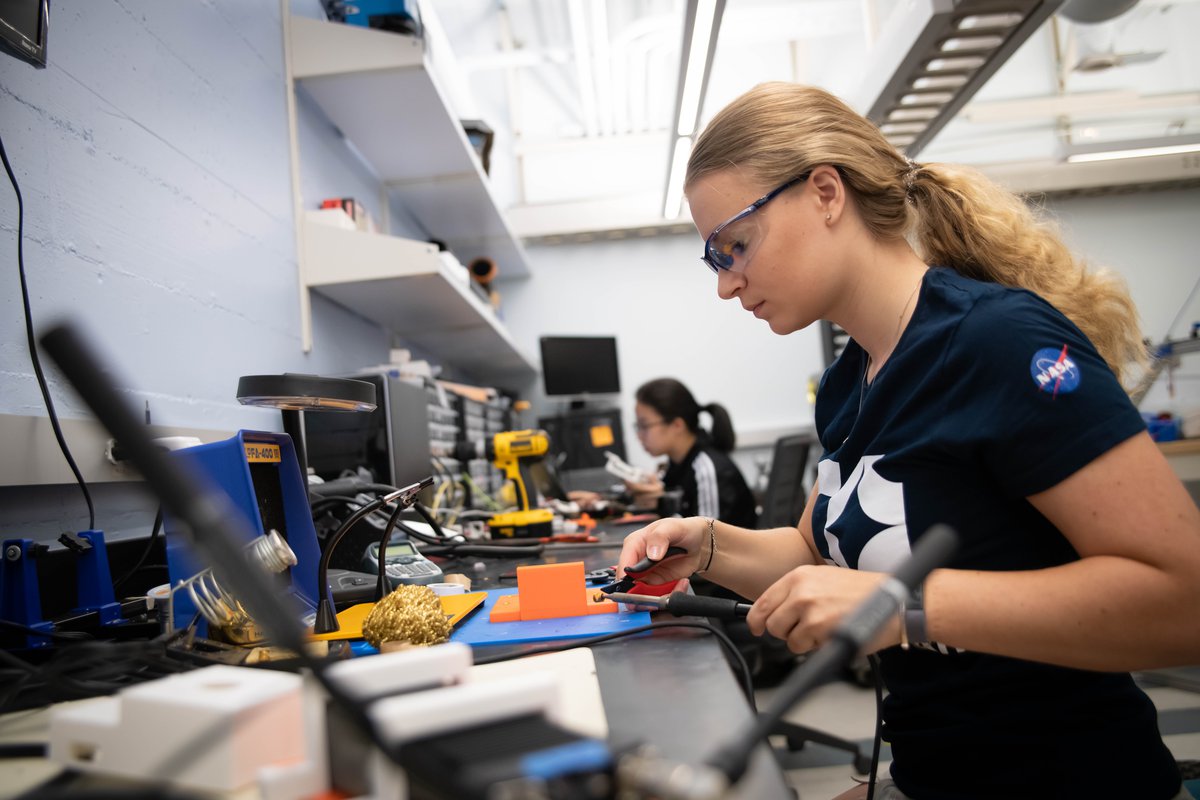 At the beginning of the summer, the Balto team was expanded to include graduate student researchers Nikhilesh Alatur and Anushri Dixit, who were tasked with incorporating autonomous control to the vehicle and integrating it into CoSTAR's fleet.

Alatur and Dixit were among the CoSTAR team members who traveled to Pittsburgh for the first leg of the SubT Challenge, held at the National Institute for Occupational Safety and Health (NIOSH) Mining Program's Safety Research Coal Mine and Experimental Mine, a federal site where mine-related safety and health research is conducted.

The competition took place over the course of four days, with each team given one hour per day to complete specific tasks, most of which involved finding and engaging with objects of interest, like a backpack or a lever arm. While a small group of 10 engineers launched the robots at the mouth of the mine, most of the rest of the team, including Alatur and Dixit, watched the action via a livestream from the conference room near the mine.

"Everyone worked in shifts, fixing robots during the night and watching the competition or sleeping during the day," Dixit says.

"Every day, up to 20 minutes before the start of our run, we weren't even sure the team was going to get off of the line," Burdick says, describing how the team would scramble to address software and hardware issues on its completely custom robots.

Given the importance of the Huskies to the fleet, the first order of business was always to make sure they made it into the field. For the first three days of the competition, Balto mainly warmed the bench as the team deployed its other vehicles.

Then, on the fourth and final day of competition, the decision was made to send in Balto.

"It was pretty intense. There were five or six people gathered around the screen, and as soon as Balto went in, everyone started screaming and shouting and cheering," says Alatur, graduate student at ETH Zurich who is spending a six-month stint on the CoSTAR team as a student researcher at JPL. "We were happy to see that Balto was sent in for the last few minutes of the competition and could make its debut in a DARPA challenge." During the competition, Alatur and Dixit stayed in constant text contact with Ketchum and Bodrova, who watched the livesteam from Caltech and were equally excited to see the robot take to the field.

Balto's mission was limited; as Burdick puts it, the main goal was to see how the robot performed and to gather data that can be used to improve it for the next round of the competition. The original plan was that Balto would be tasked with positioning communication nodes—basically, wifi signal boosters that enable all of the robots in the tunnel to stay connected—but it turned out to be unnecessary. Instead, Balto drove 125 meters into the tunnel and stopped, just as directed, and acted as a wifi unit to relay signals as necessary. "In the end, we didn't truly need it, but it did its job well," Burdick says. "And more importantly, we gained data about Balto's performance that will help us down the line."

Because of Balto's speed, diminutive size, and ruggedness, Burdick predicts a growing role for the little robot in future competitions. This year's CS/EE/ME 75 class will continue to refine Balto, as well as other new vehicles to be used in the next phases of the competition in February and August, 2020.

"I think we're going to be grateful to have a small, tough robots like Balto when we get to the final event in 2021," he says.

Balto: Portrait of a Robot

Sitting atop Balto's off-the-shelf chassis is a superstructure housing the custom pieces that transformed the R/C car into a self-guided robot. 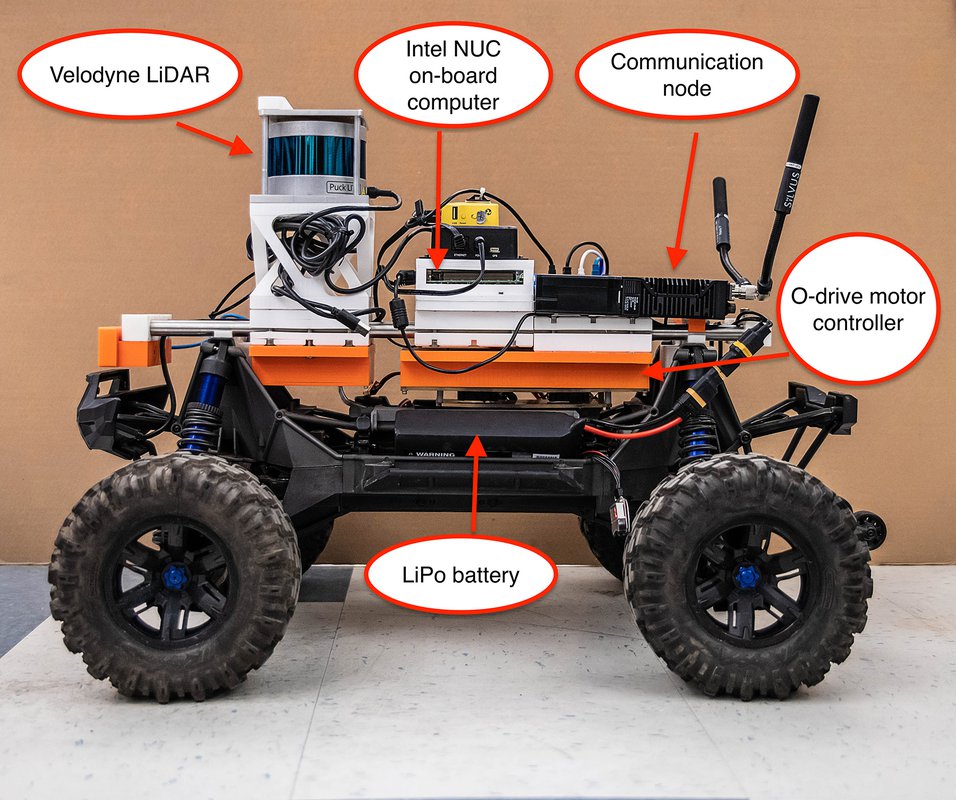