One of the many counterintuitive and bizarre insights of quantum mechanics is that even in a vacuum—what many of us think of as an empty void—all is not completely still. Low levels of noise, known as quantum fluctuations, are always present. Always, that is, unless you can pull off a quantum trick. And that's just what a team led by researchers at the California Institute of Technology (Caltech) has done. The group has engineered a miniature silicon system that produces a type of light that is quieter at certain frequencies—meaning it has fewer quantum fluctuations—than what is usually present in a vacuum.

This special type of light with fewer fluctuations is known as squeezed light and is useful for making precise measurements at lower power levels than are required when using normal light. Although other research groups previously have produced squeezed light, the Caltech team's new system, which is miniaturized on a silicon microchip, generates the ultraquiet light in a way that can be more easily adapted to a variety of sensor applications.

"This system should enable a new set of precision microsensors capable of beating standard limits set by quantum mechanics," says Oskar Painter, a professor of applied physics at Caltech and the senior author on a paper that describes the system; the paper appears in the August 8 issue of the journal Nature. "Our experiment brings together, in a tiny microchip package, many aspects of work that has been done in quantum optics and precision measurement over the last 40 years."

The history of squeezed light is closely associated with Caltech. More than 30 years ago, Kip Thorne, Caltech's Richard P. Feynman Professor of Theoretical Physics, Emeritus, and physicist Carlton Caves (PhD '79) theorized that squeezed light would enable scientists to build more sensitive detectors that could make more precise measurements. A decade later, Caltech's Jeff Kimble, the William L. Valentine Professor and professor of physics, and his colleagues conducted some of the first experiments using squeezed light. Since then, the LIGO (Laser Interferometer Gravitational-Wave Observatory) Scientific Collaboration has invested heavily in research on squeezed light because of its potential to enhance the sensitivity of gravitational-wave detectors.

In the past, squeezed light has been made using so-called nonlinear materials, which have unusual optical properties. This latest Caltech work marks the first time that squeezed light has been produced using silicon, a standard material. "We work with a material that's very plain in terms of its optical properties," says Amir Safavi-Naeini (PhD '13), a graduate student in Painter's group and one of three lead authors on the new paper. "We make it special by engineering or punching holes into it, making these mechanical structures that respond to light in a very novel way. Of course, silicon is also a material that is technologically very amenable to fabrication and integration, enabling a great many applications in electronics."

In this new system, a waveguide feeds laser light into a cavity created by two tiny silicon beams. Once there, the light bounces back and forth a bit thanks to the engineered holes, which effectively turn the beams into mirrors. When photons—particles of light—strike the beams, they cause the beams to vibrate. And the particulate nature of the light introduces quantum fluctuations that affect those vibrations.

Typically, such fluctuations mean that in order to get a good reading of a signal, you would have to increase the power of the light to overcome the noise. But by increasing the power you also introduce other problems, such as introducing excess heat into the system.

Ideally, then, any measurements should be made with as low a power as possible. "One way to do that," says Safavi-Naeini, "is to use light that has less noise."

In the experiment, a detector measuring the noise in the light as a function of frequency showed that in a frequency range centered around 28 MHz, the system produces light with less noise than what is present in a vacuum—the standard quantum limit. "But one of the interesting things," Safavi-Naeini adds, "is that by carefully designing our structures, we can actually choose the frequency at which we go below the vacuum." Many signals are specific to a particular frequency range—a certain audio band in the case of acoustic signals, or, in the case of LIGO, a frequency intimately related to the dynamics of astrophysical objects such as circling black holes. Because the optical squeezing occurs near the mechanical resonance frequency where an individual device is most sensitive to external forces, this feature would enable the system studied by the Caltech team to be optimized for targeting specific signals.

"This new way of 'squeezing light' in a silicon micro-device may provide new, significant applications in sensor technology," said Siu Au Lee, program officer at the National Science Foundation, which provided support for the work through the Institute for Quantum Information and Matter, a Physics Frontier Center. "For decades, NSF's Physics Division has been supporting basic research in quantum optics, precision measurements and nanotechnology that laid the foundation for today's accomplishments."

The paper is titled "Squeezed light from a silicon micromechanical resonator." Along with Painter and Safavi-Naeini, additional coauthors on the paper include current and former Painter-group researchers Jeff Hill (PhD '13), Simon Gröblacher (both lead authors on the paper with Safavi-Naeini), and Jasper Chan (PhD '12), as well as Markus Aspelmeyer of the Vienna Center for Quantum Science and Technology and the University of Vienna. The work was also supported by the Gordon and Betty Moore Foundation, by DARPA/MTO ORCHID through a grant from the Air Force Office of Scientific Research, and by the Kavli Nanoscience Institute at Caltech. 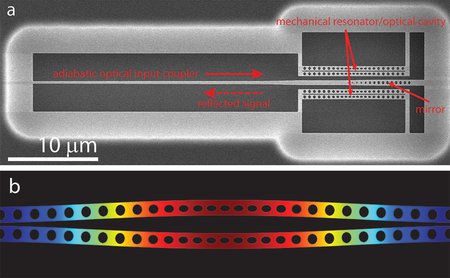 (a) SEM image of the silicon micromechanical resonator used to generate squeezed light. Light is coupled into the device using a narrow waveguide and reflects off a back mirror formed by a linear array of etched holes. Upon reflection, the light interacts with a pair of double-nanobeams (micromechanical resonator/optical cavity), which are deflected in a way that tends to cancel fluctuations in the light. (b) Numerical model of the differential in-plane motion of the nanobeams. Credit: Caltech/Amir Safavi-Naeini, Simon Groeblacher, and Jeff Hill
Image Lightbox

(a) SEM image of the silicon micromechanical resonator used to generate squeezed light. Light is coupled into the device using a narrow waveguide and reflects off a back mirror formed by a linear array of etched holes. Upon reflection, the light interacts with a pair of double-nanobeams (micromechanical resonator/optical cavity), which are deflected in a way that tends to cancel fluctuations in the light. (b) Numerical model of the differential in-plane motion of the nanobeams.
Credit: Caltech/Amir Safavi-Naeini, Simon Groeblacher, and Jeff Hill
Download Full Image
Subscribe
The Caltech Weekly