Caltech Submillimeter Observatory in Hawaii to be Decommissioned

Hilo, HI, April 30, 2009-- The California Institute of Technology (Caltech) will begin decommissioning the Caltech Submillimeter Observatory (CSO) in Hawaii. Plans call for the dismantling of the observatory to begin in 2016, with the return of the site to its natural state by 2018.

The decommissioning of the CSO is due to the construction of the next generation of radio telescope, the Cornell Caltech Atacama Telescope (CCAT), to be located in Chile. CCAT's scheduled opening will occur prior to CSO's dismantling.

The Caltech Submillimeter Observatory is a cutting-edge facility for astronomical research and instrumentation development. Located near the summit of Mauna Kea, the CSO began operation in 1986. By 2016, the observatory will have given science 30 years of groundbreaking achievements.

"The timing of this works very nicely," says Tom Phillips, director of the CSO and Altair Professor of Physics in Caltech's Division of Physics, Mathematics and Astronomy. "The international community of astronomers that rely on CSO will have a seamless transition as CCAT comes online just as CSO is decommissioned."

Caltech operates the CSO under a contract from the National Science Foundation (NSF). Its partners include the University of Texas and University of Hawaii.

The observatory has been a host for many scientists worldwide. As part of its mission, observatory time is shared among University of Hawaii researchers, Caltech, the University of Texas, and international partners.

"Our partnerships have made the observatory tremendously productive," says Andrew Lange, chair of Caltech's Division of Physics, Mathematics and Astronomy. "Without support from the state of Hawaii, its university, and the residents of the Big Island, we would not have been able to produce such valuable scientific achievements through the years."

The CSO's 10-meter radio telescope was designed and assembled by a team led by Caltech's Robert Leighton and is considered one of the easiest telescopes to use for astronomical observations.

Work at the CSO has led to the detection of heavy water on comets, which has helped determine the composition of comets. It has also led to the observation of "dusty" planets--which optical telescopes are often unable to see--allowing astronomers a better picture of a planet's composition.

Eleven staff members currently work at the Hilo, Hawaii offices of the observatory while about eight staff members work at Caltech's Pasadena campus.

"The CSO has a distinguished history of scientific achievement in Hawaii," says Caltech president Jean-Lou Chameau. "The work done there has led to important advances in astrophysics and made future observatories, such as the CCAT, possible."

When CCAT comes online in the next decade, it will be used to address some of the fundamental questions regarding the cosmos, including the origin of galaxies and early evolution of the universe; the formation of stars; and the history of planetary systems.

•    Development of superconducting-tunnel-junction detectors for radio astronomy, now commonly used on ground- and space-based radio observatories (ALMA, CARMA, Herschel)
•    Determination of the role of atomic carbon in the interstellar medium
•    Detection of the submillimeter "line forest," using the line-survey technique, as well as of key hydride molecules, which has led to improved understanding of the interstellar chemistry
•    Discovery of a new phase of stellar evolution, which occurs for red giant stars just before they completely lose their envelope to form planetary nebulae
•    Mapping of the molecular gas of radio galaxy Centaurus A, among others
•    Determination of the volatile composition of comets, including the first ground-based detection of HDO (heavy water) in a comet, leading to improved understanding of the origin of comets and of terrestrial water
•    Spectroscopy of distant and local galaxies using the Z-spec spectrometer--developed at CSO--which has helped us better understand the processes of galaxy formation and provides a method for measuring galaxies too dusty to be seen optically
•    Discovery of ND3, a rare type of ammonia, about 11 orders of magnitude stronger than initially presumed to exist
•    Imaging of distant, dusty galaxies close up which would be difficult to observe with optical telescopes--using tools such as the Submillimeter High Angular Resolution Camera (SHARC)
•    Spatially resolved imaging of nearby stellar debris disks, using SHARC, providing evidence for the presence of planets in these systems
•    Discovery of signs of intermittent turbulence in interstellar molecular clouds 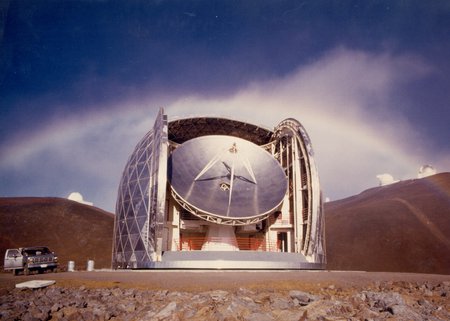 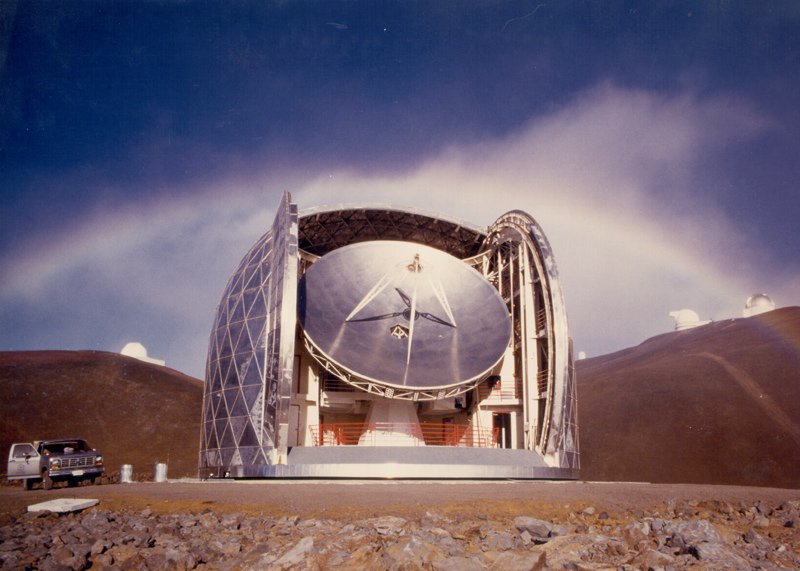