Caltech Space Challenge: Mission to an Asteroid in Lunar Orbit

For one week at the end of March, 32 students from 20 universities and 14 countries came to Caltech for an intensive training experience in space mission design: the Caltech Space Challenge. Organizers hand-selected the undergraduate and graduate students from a pool of 220 applicants and created two "dream teams" of engineers, scientists, and designers to face off in a competition to see who could design the best mission.

This year, the teams—Team Explorer and Team Voyager—were tasked with designing a manned mission to an asteroid placed in orbit around the moon. Aside from determining details such as the best type of vehicle to use, the optimal launch date, and how to keep the astronauts safe, each team was asked to explain how its mission would explore and make use of the asteroid to enable future missions to more distant locales, such as Mars.

The Space Challenge takes place at Caltech every two years. For the inaugural challenge in 2011, participants designed a manned mission to a near-Earth asteroid. Two years later, the challenge involved planning a mission to one of Mars's moons.

This year, organizers based the challenge on NASA's Asteroid Redirect Mission (ARM), proposed for launch in 2020. The concept of that mission is to send a robotic spacecraft to a near-Earth asteroid, have it remove a large boulder from the asteroid's surface, and then move it into a lunar orbit. A version of a mission originally considered by the Keck Institute for Space Studies (KISS) at Caltech, NASA's ARM is part of a larger strategy to use asteroids as a stepping-stone to manned missions to Mars and beyond.

"KISS came up with this idea to redirect an asteroid and bring it here as a way to fulfill President Obama's vision of people going to an asteroid by 2025," explains Hayden Burgoyne, a graduate student in space engineering at Caltech and one of two student lead organizers for this year's challenge. "Basically, they said, 'It's hard to send people to an asteroid; it's easier to bring an asteroid to us.' But people are looking toward the end goal of Mars, and they want to know how the Asteroid Redirect Mission will help us get there. So we framed this challenge as a resource utilization challenge to show how this resource that they bring back—this asteroid—can be used to benefit future human exploration."

Throughout the week, the students attended lectures delivered by scientists and engineers from JPL and the aerospace industry on topics related to the challenge, such as mission formulation, human space exploration, asteroid mining, and chemical propulsion. They were also able to consult with mentors working in related fields who were available to help the teams troubleshoot.

"Basically, we brought together the best of the best," says Niccolo Cymbalist, a graduate student in aeronautics at Caltech and the event's other student lead organizer. "But one of the neat things is that the students had the opportunity to interact with sort of their future selves. The speakers and mentors who came in from JPL and from industry are also at the top of their fields, and many participants from previous years have gone on to work in space-related fields."

This year, the teams also had the opportunity to complete a half-day formalized study with a group in the Innovation Foundry at JPL, known as the A-Team. These JPL scientists and engineers help explore, develop, and evaluate early mission concepts and were able to advise the students on science, implementation, and programmatic elements of their respective missions.

At the end of the week, both teams turned in written reports and presented their mission concepts to an audience that included jurors from Caltech, JPL, the Planetary Society, Lockheed Martin, Northrop Grumman, SpaceX, and Millennium Space Systems.

In their mission plans, both groups opted to use two rockets—one to launch scientific cargo and another at a later date to deliver the crew. They also both decided that three astronauts would be optimal for this mission.

Beyond those similarities, though, the two teams had quite different approaches to the challenge. Team Explorer had the idea to use an autonomous swarm of robots to characterize the topology of the asteroid and to collect samples both at the surface and at depth, using a specially designed chamber to extract volatiles. They planned to purify water found on the asteroid, demonstrating that it could be used in a variety of ways, including to water a lettuce garden—something that might capture the attention of the general public. The mission would also determine whether the asteroid could be used as a resource depot for other missions, or as part of the Deep Space Network to help facilitate communication between Earth and operating spacecraft.

In contrast, Team Voyager planned to join their mission's cargo and crew vehicles with an inflatable habitat brought along as cargo once their astronauts reached the asteroid. The astronauts would then spend five days using a robotic arm to drill and to conduct seismic surveys as they determined whether it was safe to explore the asteroid further. They also would bring a suite of scientific instruments with them, including a device to extract oxygen, hydrogen, and methanol from the asteroid, and they would collect and return samples to Earth from the asteroid's subsurface core. Team Voyager's plan for engaging the public included social media and a live feed from a 3-D HD 360-degree camera mounted on an astronaut's helmet.

The organizers say both teams presented outstanding missions. "I was blown away by the quality of the work that the students produced," says Burgoyne.

The final results were presented at a closing reception and banquet at the Athenaeum on March 27. In the end, Team Voyager came out slightly ahead of Team Explorer. According to the jury, the deciding factor was Team Voyager's presentation and success in turning their technically detailed report into a compelling story for the audience.

Alicia Lanz, a member of Team Voyager and a graduate student in physics at Caltech, says the best part of the experience was meeting and working with people from various parts of the world and with different scientific training. "It was so interesting to learn from people with different backgrounds and to see everyone work together to create a viable mission that was greater than anything a single individual could have contributed," she says. "The Caltech Space Challenge was an amazing opportunity."

The student technical lead for this year's Space Challenge was Jay Qi, a graduate student in mechanical engineering at Caltech. The faculty advisor was Beverley McKeon, professor of aeronautics at Caltech and associate director of the Graduate Aerospace Laboratories of the California Institute of Technology (GALCIT). Leon Alkalai of JPL was the program mentor. The Space Challenge is organized by GALCIT and supported by Caltech and its Division of Engineering and Applied Science, JPL, KISS, and corporate sponsors including Northrop Grumman, Lockheed Martin, SpaceX, Millennium Space Systems, and AGI. 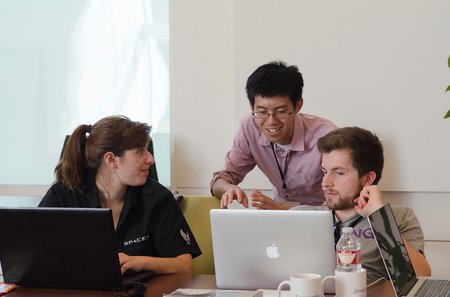 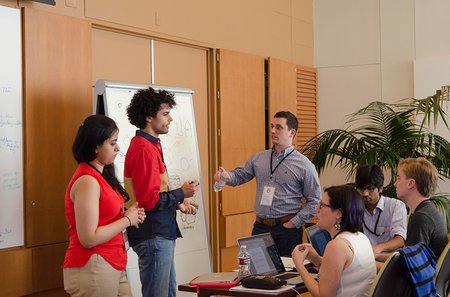 Several members of Team Voyager work out some of the details of their proposed mission in their work space in the Keck Center at Caltech. Credit: Lance Hayashida/Caltech Office of Strategic Communications 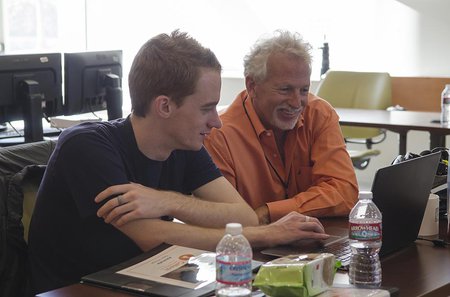 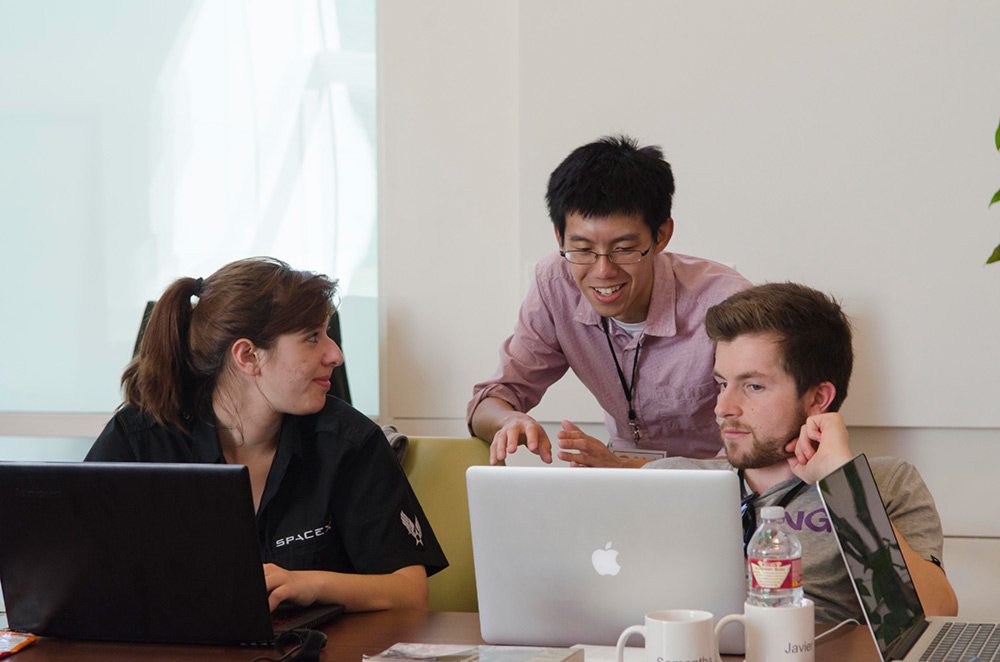 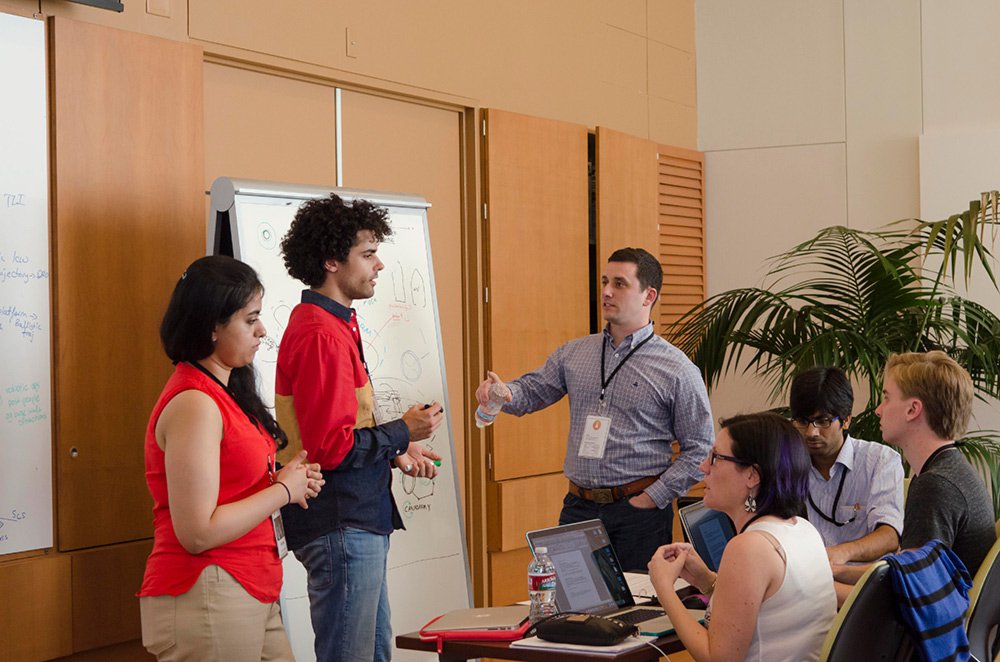 Several members of Team Voyager work out some of the details of their proposed mission in their work space in the Keck Center at Caltech.
Credit: Lance Hayashida/Caltech Office of Strategic Communications
Download Full Image 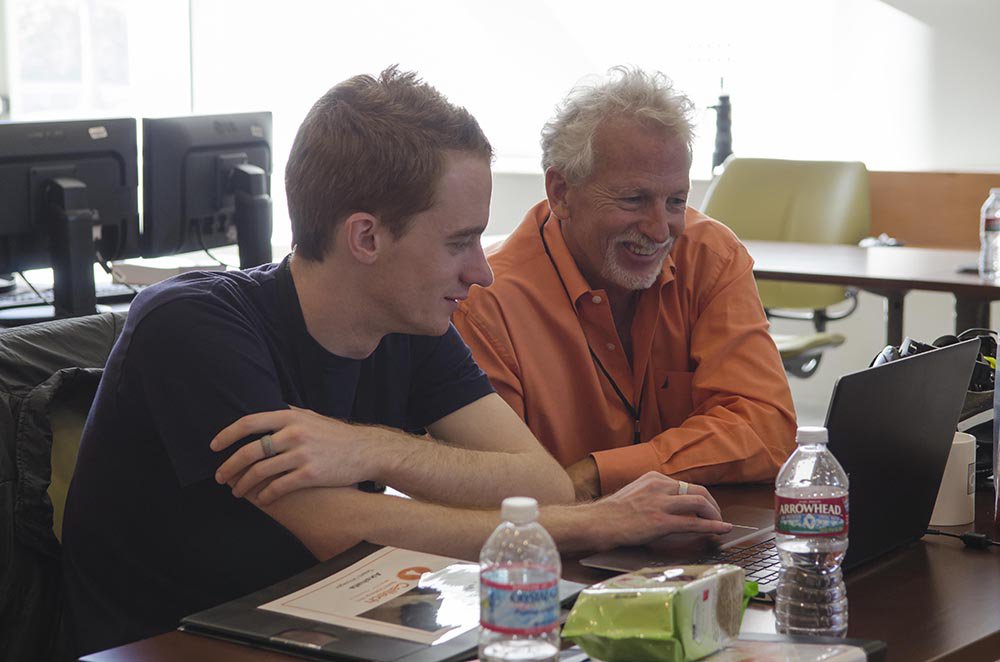