Editor's note: This piece is the first in a series on Caltech scientists who are researching the COVID-19 pandemic, each according to their own specialty. From biology, to chemistry, to social sciences, and computing, the keys to fighting the disease are waiting to be discovered.

As the nation hunkers down during the ongoing COVID-19 pandemic, our shared spaces have been left largely empty. The pace of life has slowed at Caltech as well, but hidden away in a handful of labs scattered across campus, Institute scientists are working to decipher the secrets of severe acute respiratory syndrome coronavirus 2 (SARS-CoV-2), the virus that causes the COVID-19 disease, in search of anything that can help stop its spread.

Viruses, including the novel coronavirus responsible for the current epidemic, occupy a gray area between the living and non-living realms. Technically, viruses are not alive. They cannot grow and reproduce on their own, making them parasites that require a host cell for accomplishing many of their required functions. However, they possess many building blocks found in living things, such as proteins and either RNA or DNA, depending on the type of virus. Understanding what these building blocks are, and how they work, is of vital importance in the fight to stop the virus in its tracks.

Though neither lab has specifically worked on the novel coronavirus previously, each has a research focus that makes it well suited to turn its attention to this new virus.

Giving the Immune System a Boost

Bjorkman's specialty is studying how the immune system reacts to the viruses that cause diseases such as AIDS, influenza, and complications related to Zika virus and hepatitis C virus infections. Whenever the body is invaded by a pathogen of any sort, including the novel coronavirus, one of the things it does in response is develop antibodies, immune system proteins that bind specifically to a pathogen. Humans have the ability to make a virtually unlimited number of different antibodies, thus it is possible for our bodies to use antibodies to identify any new pathogen (a particular type of virus or bacterium, for example) that arises. Our immune systems evolved to remember which antibodies were produced against a particular pathogen, so if that pathogen again invades the body, antibodies can quickly destroy it before it can cause illness. This is why some diseases can only infect a person one time and explains how vaccines protect against specific infections.

Antibodies (in yellow) attach themselves to the proteins (in green) on the surface of a virus.
Credit: Caltech
Image Lightbox 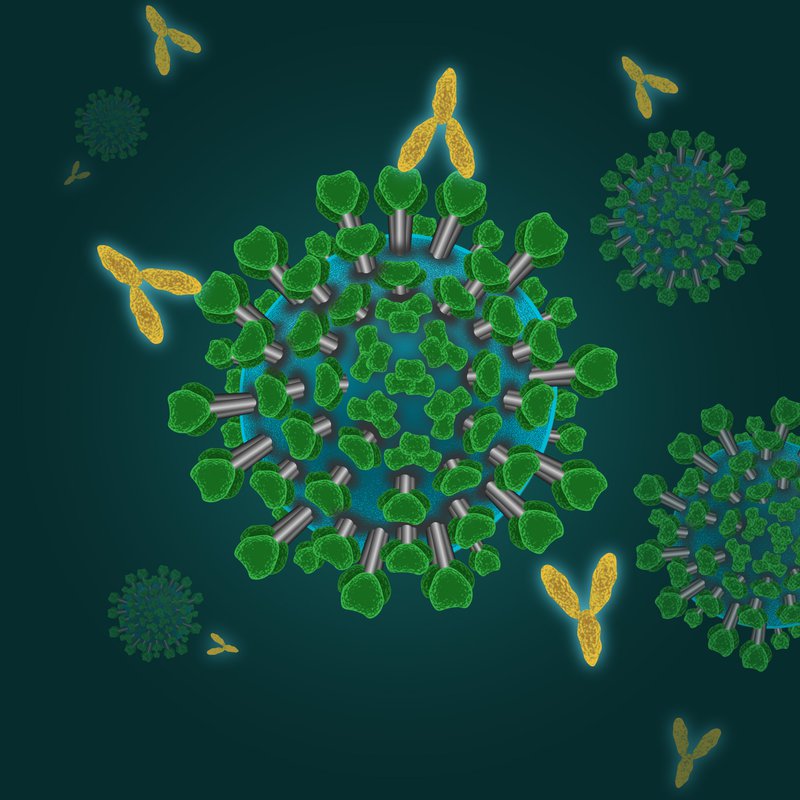 Antibodies (in yellow) attach themselves to the proteins (in green) on the surface of a virus.
Credit: Caltech
Download Full Image

The novel coronavirus belongs to a class of virus known as enveloped viruses, which also includes the viruses that cause AIDS and the flu. An enveloped virus houses its genetic material inside a fatty membrane studded with spiky proteins. The proteins help the virus gain access to the interior of the cell it infects. Coronaviruses have particularly large spikes that give the spherical virus an appearance resembling a crown, hence the name for this class of viruses, "corona" being the Latin word for crown.

The body's immune system sees and develops antibodies for the spiky proteins. Bjorkman's research team is now investigating the coronavirus spikes and the antibodies created by the immune system to recognize them. Christopher Barnes, a postdoctoral scholar in Bjorkman's lab, says that the novel coronavirus shares some characteristics with other coronaviruses, which include those that cause the common cold, SARS, and Middle East respiratory syndrome (MERS). One of his goals is to use electron microscopy to develop detailed three-dimensional structures of antibodies bound to the novel coronavirus spikes in order to study the atomic details of the interface, an accomplishment that could lead to antibody-based therapies.

In addition, he plans to compare the binding of antibodies isolated from patients who have recovered from COVID-19 to spikes from SARS, MERS, and common cold coronaviruses in order to determine whether immunity to one coronavirus might confer immunity to others. Identification of these types of antibodies, known as cross-reactive antibodies, may offer a blueprint for the development of a universal vaccine or therapy against the family of coronaviruses, helping to better prepare us for future outbreaks.

Bjorkman's team hopes that by studying the protein spikes of coronaviruses, and the antibodies that react to them, it might be possible to develop an antibody therapy that can treat the disease or learn how to make a vaccine to protect against infection. A treatment involving antibodies could likely be accomplished more rapidly than developing a protective vaccine, she says. The idea is that an injection of antibodies against the virus could provide an individual with protection before their immune system makes its own antibodies. Alternatively, very potent neutralizing antibodies might work therapeutically to stave off the worst symptoms of an infection.

Unlike Bjorkman, Hoelz had not previously focused on viruses; instead, his lab investigates the microscopic machinery in the cells of eukaryotes, the group of organisms that includes humans and other mammals. In particular, Hoelz's group studies the nuclear pore complex (NPC), the massive protein machine that controls access to the DNA-containing heart of the cell and that is also targeted by the novel coronavirus when it infects a person.

To understand what the NPC does and the role it plays in a coronavirus infection, it helps to know some basics about how a cell is structured.

A coronavirus infects cell and blocks its nuclear pore complex (in yellow) with its ORF6 proteins (in pink).
Credit: Caltech
Image Lightbox 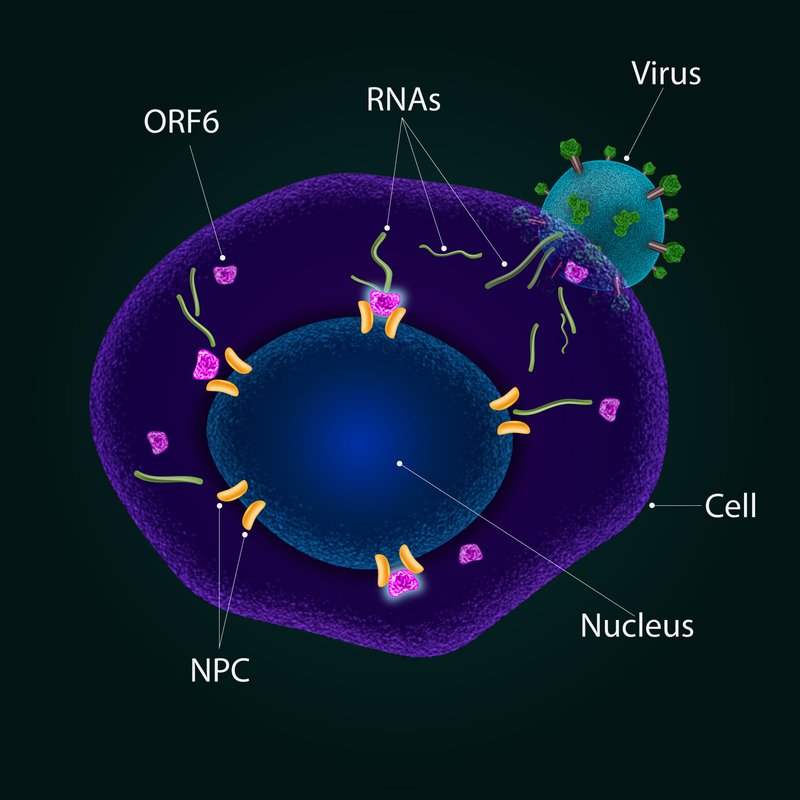 A coronavirus infects cell and blocks its nuclear pore complex (in yellow) with its ORF6 proteins (in pink).
Credit: Caltech
Download Full Image

In eukaryotes, so-called higher-life forms, a cell's genetic material is held inside a ball-shaped organelle called the nucleus. The nucleus is roughly akin to the cell's brain. It holds the information the cell needs to perform its functions and it controls the actions of other parts of the cell.

In a normally functioning cell, the nucleus makes copies of the instructions held in its genetic material in the form of short strands of RNA that are then sent out, via pores in the nuclear membrane, into the main chamber of the cell, known as the cytoplasm. The pores are not just holes but instead are composed of a collection of proteins collectively known as the NPC.

After a strand of RNA passes through the NPC into the cytoplasm, it provides the instructions to manufacture a given protein needed by the cell. It is this series of steps that is targeted by the coronavirus, says Hoelz. "When viruses interact with a host cell, they want to get an advantage any way they can. A lot of viruses do this by targeting the nuclear pore complex. They will destroy it, they will take it apart, they will modify it," he says.

By blocking the NPC, viruses prevent the nucleus from exporting RNA strands. That is good for the virus, as it is provided with nearly unfettered access to the cell's machinery to manufacture its own proteins. Hoelz likens it to an automobile factory.

"If you have a factory that can make cars and SUVs on the same assembly line, but you want to make more SUVs, you stop making the cars," he says. "The virus has the instructions to make its own parts like tires, body, engine—all the things you need to build an SUV—plus this ability to stop the original cars from being made."

When the call came to suspend all non-essential research activities at Caltech, Hoelz had just made plans to investigate another NPC-dependent mechanism by which the virus might overwhelm its host, involving a protein called ORF6. The novel coronavirus possesses this protein, which its close relatives that cause SARS, MERS, and the common cold use to block the molecular pathway by which cells alert their neighbors that they have been infected. Basically, ORF6 shuts down the alarm system that would tell other cells that there is an infection underway. "These viruses are unbelievably clever," Hoelz says.

Shortly after the call came to shut down research, he received a request from a researcher at UC San Francisco (UCSF) who is part of that university's COVID-19 initiative. The UCSF team had found hints that the same ORF6 protein is responsible for shutting down the NPC. They wanted to know if Hoelz could help them investigate it by manufacturing both ORF6 and the parts of the NPC it targets and determine how exactly ORF6 inactivates them.

"We are maybe one of two labs in the world that can do this. We have everything ready," Hoelz says.

Hoelz says he did not require that any members of his lab stay on campus, but when he asked for volunteers, three researchers offered their help: research technician Bonnie Brown and postdoctoral scholars Xiaoyu Liu and George Mobbs.

Mobbs says he had no doubts he wanted to be involved in the effort.

"I'm just humbled that my training and experience has led me to the point where I can play a small role, which I hope will benefit people during this crisis," he says.

"It is simultaneously exhilarating and humbling that I can contribute at a time when making advances about the coronavirus matters so much for the development of novel treatments and ultimately to save lives," she says.

Brown says being on campus when so many others have been sent home feels a bit eerie, but adds that having work to do brings a bit of normalcy back into her life.

"Every day in the news you read how destructive the virus is in terms of human health and it scares you a bit," she says. "However, when you enter the lab and look at the list of experiments that are to be conducted, you take a break from that narrative, and the virus becomes just another set of questions to be answered."

Together, they will work to manufacture in bulk both ORF6 and the cellular proteins it targets. Then they will study the proteins' molecular structures and how the proteins interact, with the ultimate goal of informing the search for a drug that can block ORF6. Hoelz says such a drug would not be a substitute for a vaccine but it could help reduce the severity of the illnesses of infected people. That he can help gives him a feeling of hope.

"The path I've been on has uniquely prepared me to contribute," he says. "It feels like I've trained my entire life to do this. Some people train to climb mountains. This is what I've trained for."