PASADENA, Calif.—On Earth, lake levels rise and fall with the seasons and with longer-term climate changes, as precipitation, evaporation, and runoff add and remove liquid. Now, for the first time, scientists have found compelling evidence for similar lake-level changes on Saturn's largest moon, Titan—the only other place in the solar system seen to have a hydrological cycle with standing liquid on the surface.

Using data gathered by NASA's Cassini spacecraft over a span of four years, the researchers—led by graduate student Alexander G. Hayes of the California Institute of Technology (Caltech) and Oded Aharonson, associate professor of planetary science at Caltech—have obtained two separate lines of evidence showing roughly a 1 meter per year drop in the levels of lakes in Titan's southern hemisphere. The decrease is the result of the seasonal evaporation of liquid methane from the lakes—which, because of Titan's frigid temperatures (roughly minus 300 degrees Fahrenheit at the poles), are composed largely of liquid methane, ethane, and propane.

"It's really exciting because, on this distant object, we're able to see this meter-scale drop in lake depth," says Hayes. "We didn't know Cassini would even be able to see these things."

One of the lakes—Ontario Lacus (named after Earth's Lake Ontario, which is of comparable size) —is the southern hemisphere's largest lake, and was the first lake to be observed on the moon. In a paper submitted to the journal Icarus, Hayes, Aharonson, and their colleagues report that the shoreline of Ontario Lacus receded by about 10 kilometers (6 miles) from June 2005 to July 2009, a period of time that represents mid-summer to fall in Titan's southern hemisphere. (One Titan year lasts 29.5 Earth years.)

Ontario Lacus and other southern-hemisphere lakes were analyzed using Synthetic Aperture Radar (SAR) image data from the Cassini spacecraft. In radar data, smooth features—such as lakes—appear as dark areas, while rougher features—such as mountain belts—appear bright. The intensity of the radar backscatter provides information about the composition and roughness of surface features. In addition to the SAR data, radar altimetry—which measures the time it takes for microwave signals bouncing off a surface to arrive back at the spacecraft—was collected across a transect of Ontario Lacus in December 2008.

"The combination of SAR and altimetry measurements across the transect gave information about the absorptive properties of the liquid, and argues that the liquids are relatively pure hydrocarbons made up of methane and ethane and not a gunky tar," Aharonson says.

"The liquid is not highly attenuating," explains Hayes, "which means it is fairly clear to radar energy—that is, transparent, like liquid natural gas." Because of this, radar can see through the liquid in Titan's lakes to a depth of several meters. "Then the radar hits the floor, and bounces back," he says. "Or, if the lake is deeper than a few meters, the radar is completely absorbed, producing a 'black' signature."

Once the liquid's optical properties were known, the researchers could use the radar data to "see" the lakebed underneath the liquid—at least, down to the depth where the signal is completely attenuated. "How far offshore you can see is determined by the local slope of the lakebed, or bathymetry," says Hayes. "This gave us the ability to take changes in radar signals and convert them to depths," and thus to calculate the slope of the lakebed around the entire lake.

"We were able to determine the bathymetry of the lake out to a depth of about 8 meters," he says. The lake is shallowest and most gently sloped along its southern edge, in areas where sediment is accumulating. Along its eastern shore, the slope of the lake is somewhat steeper. "This is what we are calling the 'beachhead,'" Hayes says. The slope is very steep along the lake's northern boundary, where it butts up against a range of mountains.

"The slope changes we see are consistent with the geology around the lake," Hayes says. The bathymetry measurements and their geologic correlations are discussed in a separate paper by Hayes, Aharonson, and colleagues, which has been accepted for publication in the Journal of Geophysical Research (JGR).

The researchers compared lake images obtained four years apart, and found that Ontario had shrunk. "The extent to which the lake has receded is related to the slope—i.e., where the lake is shallow, the liquid will have receded more," Hayes says. "This allows us to deduce the vertical height by which the lake depth has dropped, which is about 1 meter per year."

The researchers also analyzed the evaporation of methane from nearby lakes by comparing the radar signatures of these lakes as measured in December 2007 with data obtained in May 2009. Over that period, the "apparent darkness" of the lakes—indicating the presence of a radar-attenuating liquid—either decreased or disappeared entirely, which means that their liquid levels had been reduced. The researchers were able to calculate the drop in lake depth, "and we got the same result: 1 meter per year of liquid loss," Aharonson says.

Lakes in Titan's northern hemisphere—which is now entering spring—have also been covered multiple times by radar instruments, but so far no analogous changes have been conclusively detected.

That doesn't mean the changes haven't occurred, however. "We would expect it will happen, but we don't know how it would manifest in the data if the lakes in the north are significantly deeper. We'll continue to look for this effect with future radar images, to disentangle the seasonal variations from longer-term climate variations we previously have proposed." Aharonson says.

The work described in the two papers—"Transient Surface Liquid in Titan's Polar Regions from Cassini," which was submitted to Icarus, and "Bathymetry and Absorptivity of Titan's Ontario Lacus," which was accepted by JGR—was supported by the Cassini Project and NASA's Graduate Student Researchers Program, and was carried out in collaboration with members of the Cassini RADAR Science Team. The Cassini mission is managed by the Jet Propulsion Laboratory in Pasadena, California. 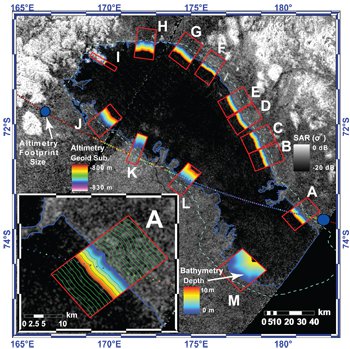 Synthetic Aperture Radar (SAR) map of Ontario Lacus, the largest lake in Titan's southern hemisphere. Radar altimeter tracks show that Ontario lies in a shallow regional basin. The early (June 2005) and subsequent (June/July 2009) outlines of the lake are shown in cyan and blue, respectively. During the four-year observation period the lake receded by ~10 km at places, consistent with an average depth reduction of ~1 m/yr. Inset; Region A with contours of constant distance from shoreline. Credit: Radar Science Team, NASA/JPL/Caltech