PASADENA, Calif.—Using state-of-the-art electron microscopy techniques, a team led by researchers from the California Institute of Technology (Caltech) has for the first time visualized and described the precise arrangement of chemoreceptors—the receptors that sense and respond to chemical stimuli—in bacteria. In addition, they have found that this specific architecture is the same throughout a wide variety of bacterial species, which means that this is a stable, universal structure that has been conserved over evolutionary time.

Their research, which was published this week in the online early edition of the Proceedings of the National Academy of Sciences (PNAS), may help scientists better understand the complex signaling pathways that are at the core of many biological processes.

Bacteria swim using flagella to propel themselves. But it's not as simple as that, explains Grant Jensen, associate professor of biology at Caltech and an investigator with the Howard Hughes Medical Institute (HHMI), who led the team. After all, they need to decide where to swim. "They tend to swim toward a favorable environment, and away from a harsh environment," Jensen says.

How do they know which is which? Enter the chemoreceptors, tiny protein molecules found at the front of the bacterium, near the flagella. "It's like a protein antenna that protrudes from the bacterial cell body, through the membrane, and out onto the surface," says Jensen. "It binds to nutrients and other chemical stimuli."

While swimming in a single direction, a bacterium such as Escherichia coli may encounter some nutrients, which then bind to the chemoreceptors. "This transmits a signal to the inside of the cell saying that things are good," says Jensen. "So the bacterium will keep swimming in the same direction. But if there are no good nutrients, the cell will do something called 'tumbling,' in which it stops and randomly flips over in the fluid, then starts swimming again in a random direction in a search for better conditions."

"One of the remarkable things about this system," says Jensen, "is that the chemoreceptors are exquisitely sensitive to changes in the concentrations of positive and negative stimuli.

Scientists believe that this sensitivity is due to the way the hundreds of chemoreceptors cluster together in the bacterial cell. "It is known that if one receptor binds a stimulus molecule, it turns on other receptors around it as well to amplify the signal," Jensen explains. "The whole system also adapts to changing conditions, dynamically adjusting the range of concentrations that it responds to.

To fully understand just what is happening in these cells, Jensen says, it is thus important to figure out the ways in which these receptors interact with one another, which in turn depends on understanding precisely how they are situated in relation to one another.

In other words, scientists need to be able to "see" the internal architecture of the bacterial cell and, in particular, how its chemoreceptors are arrayed.

Jensen and his team were able to get just such a glimpse at the chemoreceptor architecture at the macromolecular level, thanks to a state-of-the-art electron cryomicroscope that was purchased with a gift from the Gordon and Betty Moore Foundation.

"The electron cryomicroscope allows us to see the arrangement of individual proteins inside cells in a lifelike state," says Jensen. "To do this, living cells are quickly frozen so that all the proteins are frozen in place—in the same places they were in the living state."

The high-tech microscope allowed the researchers to take 3-D images of intact cells through a technique called electron cryotomography. The researchers looked at some 700 tomographic images—or tomograms—of bacterial cells, says Caltech postdoctoral scholar Ariane Briegel, the first author on the PNAS paper, and an HHMI associate. "This is the first time such a large number of tomograms was used to answer a biological question," she notes. "And it was made possible by the combination of a state-of-the-art electron microscope and fully automated data collection."

What they saw when they glimpsed the insides of these quick-frozen bacteria were chemoreceptors arranged in a regular, repeating lattice of hexagons—a structure with six sides and six corners or vertices—that are 12 nanometers apart, center to center. At each of the vertices sit six chemoreceptors, arranged in what scientists call "trimers of dimers," which means there are three sets of two paired receptors in each grouping. The two receptors in each dimer twine around one another, and those dimers then cluster together at one vertex of the hexagon to form a trimer.

"One beauty of this is that we've shown that the receptors cluster in cells in the same way they did in the crystal structure," says Jensen. "In the past, we didn't know if that was an artifact of the crystallography. Now we can see how the pieces fit together in real cells."

The paper also showed that this particular architecture is no single-species fluke. "We looked at 13 different species that cover the whole bacterial kingdom," Jensen says. "The arrays were all the same. This shows us that this structure has been universally conserved, that it's a universal architecture."

And that's important to know, he adds, because it gives scientists a basis for trying to figure out how this sort of architecture leads to the bacteria's sensitivity to chemical cues in its environment and establishes that work using key model systems such as E. coli will be generally applicable.

"Bacterial chemotaxis consists of only a few key components, making it an important model system for all cell signaling pathways," says Briegel. "We need to understand this system first before we can hope to fully understand the more complex eukaryotic signaling systems. Chemotaxis also plays an important role in the first steps of host invasion for pathogenic bacteria. Understanding it might help in the development of new antimicrobial agents."

In addition to Jensen and Briegel, other authors on the PNAS paper, "Universal architecture of bacterial chemoreceptor arrays," include Caltech's Elitza Tocheva, Zhuo Li, Songye Chen, Axel Müller, Cristina Iancu, Gavin Murphy, and Megan Dobro; Davi Ortega and Kristin Wuichet of the University of Tennessee; and Igor Zhulin of the University of Tennessee and of Oak Ridge National Laboratory.

Their work was funded by grants from the National Institutes of Health, the Howard Hughes Medical Institute, the Beckman Institute at Caltech, and gifts to Caltech from the Gordon and Betty Moore Foundation and the Agouron Institute. 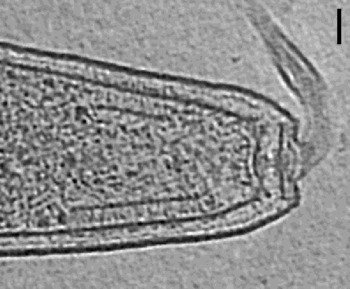 This side view of the bacterium Helicobacter hepaticus shows the flagella and the region in which the chemoreceptors cluster. Credit: PNAS/Ariane Briegel, Caltech 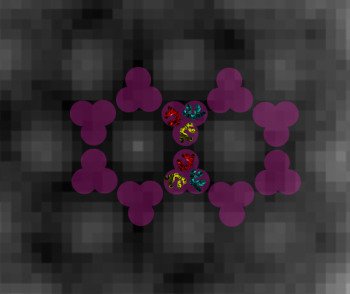 A model of the hexagonal arrangement of the chemoreceptors and their groupings in what are known as "trimers of dimers." Credit: Molecular Microbiology/Ariane Briegel, Caltech
Image Lightbox
Subscribe
The Caltech Weekly