PASADENA, Calif.—In 1969, an exploding fireball tore through the sky over Mexico, scattering thousands of pieces of meteorite across the state of Chihuahua. More than 40 years later, the Allende meteorite is still serving the scientific community as a rich source of information about the early stages of our solar system's evolution. Recently, scientists from the California Institute of Technology (Caltech) discovered a new mineral embedded in the space rock—one they believe to be among the oldest minerals formed in the solar system.

Dubbed panguite, the new titanium oxide is named after Pan Gu, the giant from ancient Chinese mythology who established the world by separating yin from yang to create the earth and the sky. The mineral and the mineral name have been approved by the International Mineralogical Association's Commission on New Minerals, Nomenclature and Classification. A paper outlining the discovery and the properties of this new mineral will be published in the July issue of the journal American Mineralogist, and is available online now.

"Panguite is an especially exciting discovery since it is not only a new mineral, but also a material previously unknown to science," says Chi Ma, a senior scientist and director of the Geological and Planetary Sciences division's Analytical Facility at Caltech and corresponding author on the paper.

The Allende meteorite is the largest carbonaceous chondrite—a diverse class of primitive meteorites—ever found on our planet and is considered by many the best-studied meteorite in history. As a result of an ongoing nanomineralogy investigation of primitive meteorites—which Ma has been leading since 2007—nine new minerals, including panguite, have been found in the Allende meteorite. Some of those new finds include the minerals allendeite, hexamolybdenum, tistarite, and kangite. Nanomineralogy looks at tiny particles of minerals and the minuscule features within those minerals.

"The intensive studies of objects in this meteorite have had a tremendous influence on current thinking about processes, timing, and chemistry in the primitive solar nebula and small planetary bodies," says coauthor George Rossman, the Eleanor and John R. McMillan Professor of Mineralogy at Caltech.

Panguite was observed first under a scanning electron microscope in an ultra-refractory inclusion embedded in the meteorite. Refractory inclusions are among the first solid objects formed in our solar system, dating back to before the formation of Earth and the other planets. "Refractory" refers to the fact that these inclusions contain minerals that are stable at high temperatures and in extreme environments, which attests to their likely formation as primitive, high-temperature liquids produced by the solar nebula.

According to Ma, studies of panguite and other newly discovered refractory minerals are continuing in an effort to learn more about the conditions under which they formed and subsequently evolved. "Such investigations are essential to understand the origins of our solar system," he says.

Additional authors on the American Mineralogist paper, "Panguite, (Ti4+,Sc,Al,Mg,Zr,Ca)1.8O3, a new ultra-refractory titania mineral from the Allende meteorite: Synchrotron micro-diffraction and EBSD," are John R. Beckett, senior research scientist at Caltech; Oliver Tschauner from the University of Nevada–Las Vegas; and Wenjun Liu from the Argonne National Laboratory. The study was supported through grants from the National Science Foundation, the U.S. Department of Energy, and NASA's Office of Space Science. 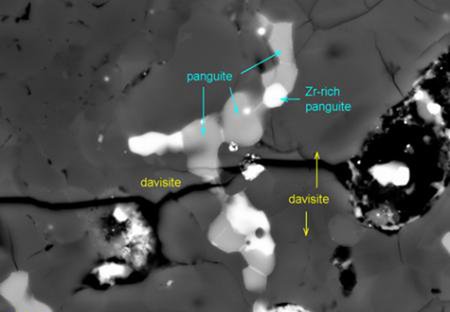 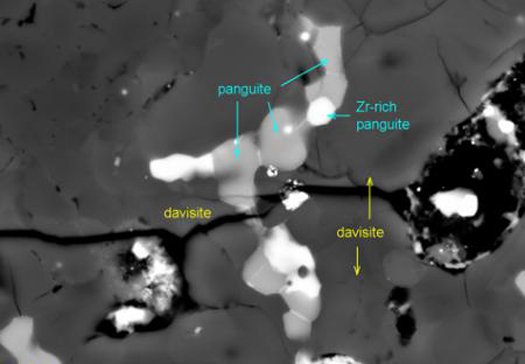