Caltech Scientists Discover Why Flies Are So Hard to Swat

PASADENA, Calif.--Over the past two decades, Michael Dickinson has been interviewed by reporters hundreds of times about his research on the biomechanics of insect flight. One question from the press has always dogged him: Why are flies so hard to swat?

"Now I can finally answer," says Dickinson, the Esther M. and Abe M. Zarem Professor of Bioengineering at the California Institute of Technology (Caltech).

Using high-resolution, high-speed digital imaging of fruit flies (Drosophila melanogaster) faced with a looming swatter, Dickinson and graduate student Gwyneth Card have determined the secret to a fly's evasive maneuvering. Long before the fly leaps, its tiny brain calculates the location of the impending threat, comes up with an escape plan, and places its legs in an optimal position to hop out of the way in the opposite direction. All of this action takes place within about 100 milliseconds after the fly first spots the swatter.

"This illustrates how rapidly the fly's brain can process sensory information into an appropriate motor response," Dickinson says.

For example, the videos showed that if the descending swatter--actually, a 14-centimeter-diameter black disk, dropping at a 50-degree angle toward a fly standing at the center of a small platform--comes from in front of the fly, the fly moves its middle legs forward and leans back, then raises and extends its legs to push off backward. When the threat comes from the back, however, the fly (which has a nearly 360-degree field of view and can see behind itself) moves its middle legs a tiny bit backwards. With a threat from the side, the fly keeps its middle legs stationary, but leans its whole body in the opposite direction before it jumps.

"We also found that when the fly makes planning movements prior to take-off, it takes into account its body position at the time it first sees the threat," Dickinson says. "When it first notices an approaching threat, a fly's body might be in any sort of posture depending on what it was doing at the time, like grooming, feeding, walking, or courting. Our experiments showed that the fly somehow 'knows' whether it needs to make large or small postural changes to reach the correct preflight posture. This means that the fly must integrate visual information from its eyes, which tell it where the threat is approaching from, with mechanosensory information from its legs, which tells it how to move to reach the proper preflight pose."

The results offer new insight into the fly nervous system, and suggest that within the fly brain there is a map in which the position of the looming threat "is transformed into an appropriate pattern of leg and body motion prior to take off," Dickinson says. "This is a rather sophisticated sensory-to-motor transformation and the search is on to find the place in the brain where this happens," he says.

Dickinson's research also suggests an optimal method for actually swatting a fly. "It is best not to swat at the fly's starting position, but rather to aim a bit forward of that to anticipate where the fly is going to jump when it first sees your swatter," he says.

The paper, "Visually Mediated Motor Planning in the Escape Response of Drosophila," will be published August 28 in the journal Current Biology. 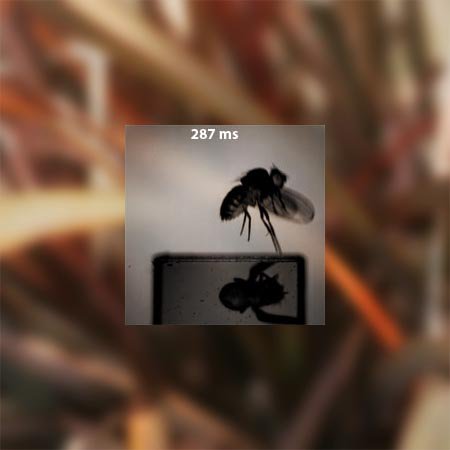