Researchers at the California Institute of Technology (Caltech) and world-leading gene-synthesis company DNA2.0 have taken an important step toward the development of a cost-efficient process to extract sugars from cellulose--the world's most abundant organic material and cheapest form of solar-energy storage. Plant sugars are easily converted into a variety of renewable fuels such as ethanol or butanol.

In a paper published this week in the early edition of the Proceedings of the National Academy of Sciences, Frances H. Arnold, the Dick and Barbara Dickinson Professor of Chemical Engineering and Biochemistry at Caltech, and her colleagues report the construction of 15 new highly stable fungal enzyme catalysts that efficiently break down cellulose into sugars at high temperatures. Previously, fewer than 10 such fungal cellobiohydrolase II enzymes were known. In addition to their remarkable stabilities, Arnold's enzymes degrade cellulose over a wide range of conditions.

Biofuels are made by converting renewable materials--for example, corn kernels, wood chips left over from pulp and paper production, prairie grasses, and even garbage--into fuels and chemicals. Most biofuels used today are made from the fermentation of starch from corn kernels. That process, although simple, is costly because of the high price of the corn kernels themselves.

Agricultural waste, such as corn stover (the leaves, stalks, and stripped cobs of corn plants, left over after harvest), is cheap. These materials are largely composed of cellulose, the chief component of plant-cell walls. Cellulose is far tougher to break down than starch. An additional complication is that while the fermentation reaction that breaks down corn starch needs just one enzyme, the degradation of cellulose requires a whole suite of enzymes, or cellulases, working in concert.

The cellulases currently used industrially, all of which were isolated from various species of plant-decaying filamentous fungi, are both slow and unstable, and, as a result, the process remains prohibitively expensive. "Even a two-fold reduction in their cost could make a big difference to the economics of renewable fuels and chemicals," says Arnold.

Arnold and Caltech postdoctoral scholar Pete Heinzelman created the 15 new enzymes using a process called structure-guided recombination. Using a computer program to design where the genes recombine, the Caltech researchers "mated" the sequences of three known fungal cellulases to make more than 6,000 progeny sequences that were different from any of the parents, yet encoded proteins with the same structure and cellulose-degradation ability.

By analyzing the enzymes encoded by a small subset of those sequences, the Caltech and DNA2.0 researchers were able to predict which of the more than 6,000 possible new enzymes would be the most stable, especially under higher temperatures (a characteristic called thermostability).

"Enzymes that are highly thermostable also tend to last for a long time, even at lower temperatures," Arnold says. "And, longer-lasting enzymes break down more cellulose, leading to lower cost."

Using the computer-generated sequences, coauthor Jeremy Minshull and colleagues from DNA2.0 of Menlo Park, California, synthesized actual DNA sequences, which were transferred into yeast in Arnold's laboratory. The yeast produced the enzymes, which were then tested for their cellulose-degrading ability and efficiency. Each of the 15 new cellulases reported in the PNAS paper was more stable, worked at significantly higher temperatures (70 to 75 degrees Celsius), and degraded more cellulose than the parent enzymes at those temperatures.

"This is a really nice demonstration of the power of synthetic biology," Arnold says. "You can rapidly generate novel, interesting biological materials in the laboratory, and you don't have to rely on what you find in nature. We just emailed DNA2.0 sequences based on what we pulled out of a database and our recombination design, and they synthesized the DNA. We never had to go to any organism to get them. We never touched a fungus."

Next, the researchers plan to use the structure-guided recombination process to perfect each of the half-dozen or so cellulases that make up the soup of enzymes required for the industrial degradation of cellulose. "We've demonstrated the process on one of the components. Now we have to create families of all of the other components, and then look for the ideal mixtures for each individual application," Arnold says, with the ultimate goal of creating a cost-efficient recipe for cellulosic biofuel.

"If you think about it, energy is the biggest industry there is," Arnold says. "If we can replace foreign oil with renewable biofuels, that's an enormous contribution. And that replacement is slow right now because these enzymes are just too expensive."

The work in the paper, "A Family of Thermostable Fungal Cellulases Created by Structure-Guided Recombination," was supported by the Army-Industry Institute for Collaborative Biotechnologies and the Caltech Innovation Institute. 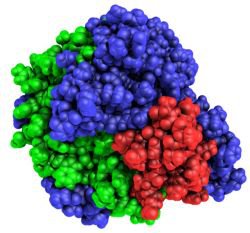 Portions of three natural fungal cellulase enzymes (shown in blue, red, and green) have been recombined to produce a synthetic, thermostable cellulase that functions at higher temperatures than any of the three parents. Credit: Caltech/Christopher D. Snow, the Arnold group.

Portions of three natural fungal cellulase enzymes (shown in blue, red, and green) have been recombined to produce a synthetic, thermostable cellulase that functions at higher temperatures than any of the three parents. Credit: Caltech/Christopher D. Snow, the Arnold group.
Image Lightbox
Subscribe
The Caltech Weekly