Caltech scientists have created a strain of bacteria that can make small but energy-packed carbon rings that are useful starting materials for creating other chemicals and materials. These rings, which are otherwise particularly difficult to prepare, now can be "brewed" in much the same way as beer.

The bacteria were created by researchers in the lab of Frances Arnold, Caltech's Linus Pauling Professor of Chemical Engineering, Bioengineering and Biochemistry, using directed evolution, a technique Arnold developed in the 1990s. The technique allows scientists to quickly and easily breed bacteria with the traits that they desire. It has previously been used by Arnold's lab to evolve bacteria that create carbon-silicon and carbon-boron bonds, neither of which is found among organisms in the natural world. Using this same technique, they set out to build the tiny carbon rings rarely seen in nature.

In a paper published this month in the journal Science, the researchers describe how they have now coaxed Escherichia coli bacteria into creating bicyclobutanes, a group of chemicals that contain four carbon atoms arranged so they form two triangles that share a side. To visualize its shape, imagine a square piece of paper that's lightly creased along a diagonal.

Bicyclobutanes are difficult to make because the bonds between the carbon atoms are bent at angles that put them under a great deal of strain. Bending these bonds away from their natural shape takes a lot of energy and can result in unwanted byproducts if the conditions for their synthesis aren't just right. But it's the strain that makes bicyclobutanes so useful. The bent bonds act like tightly wound springs: they pack a lot of energy that can be used to drive chemical reactions, making bicyclobutanes useful precursors to a variety of chemical products, such as pharmaceuticals, agrochemicals, and materials. When strained rings, like bicyclobutanes, are incorporated into larger molecules, they can imbue those molecules with interesting properties—for example, the ability to conduct electricity but only when an external force is applied—making them potentially useful for creating smart materials that are responsive to their environments.

Unlike other carbon rings, such as cyclohexanes and cyclopentanes, bicyclobutanes are rarely found in nature. This could be due to their inherit instability or the lack of suitable biological machineries for their assembly. But now, Arnold and her team have shown that bacteria can be genetically reprogrammed to produce bicyclobutanes from simple commercial starting materials. As the E. coli cells go about their bacterial business, they churn out bicyclobutanes. The setup is kind of like putting sugar and letting it ferment into alcohol.

"To our surprise, the enzymes can be engineered to efficiently make such crazy carbon rings under ambient conditions," says graduate student Kai Chen, lead author on the paper. "This is the first time anyone has introduced a non-native pathway for bacteria to forge these high-energy structures."

Chen and his colleagues, postdocs Xiongyi Huang, Jennifer Kan, and graduate student Ruijie Zhang, did this by giving the bacteria a copy of a gene that encodes an enzyme called cytochrome P450. The enzyme had previously been modified through directed evolution by the Arnold lab and others to create molecules containing small rings of three carbon atoms—essentially half of a bicyclobutane group.

"The beauty is that a well-defined active-site environment was crafted in the enzyme to greatly facilitate formation of these high-energy molecules," Huang says.

The precision with which the bacterial enzymes do their work also allows the researchers to efficiently make the exact strained rings they want, with a precise configuration and in a single chiral form. Chirality is a property of molecules in which they can be "right-handed" or "left-handed," with each form being the mirror image of the other. It matters because living things are selective about which "handedness" of a molecule they use or produce. For instance, all living things exclusively use the right-handed form of the sugar ribose (the backbone of DNA), and many chiral pharmaceutical chemicals are only effective in one handedness; in the other, they can be toxic.

Chiral forms of a molecule are difficult to separate from one another, but by changing the genetic code of the bacteria, the researchers can ensure the enzymes favor one chiral product over another. Mutation in the genes tuned the enzymes to forge a broad range of bicyclobutanes with high precision.

Kan says advancements like theirs are pushing chemistry in a greener direction.

"In the future, instead of building chemical plants for making the products we need to improve lives, wouldn't it be great if we could just program bacteria to make what we want?" Kan says.

The paper, titled "Enzymatic Construction of Highly Strained Carbocycles," appears in the April 5 issue of Science. Funding for the research was supplied by the National Science Foundation, the National Institutes of Health, and the Donna and Benjamin M. Rosen Bioengineering Center. 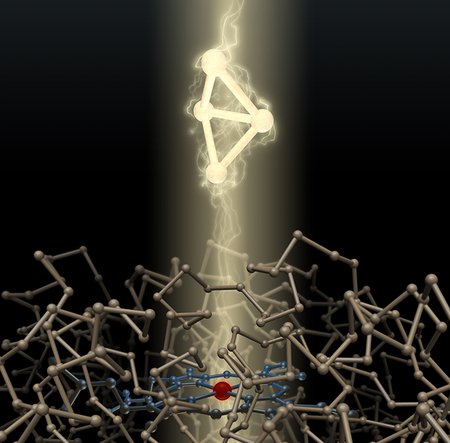 An artist's depiction of a bacterial enzyme and the high-energy carbon ring it created. Credit: Caltech
Image Lightbox 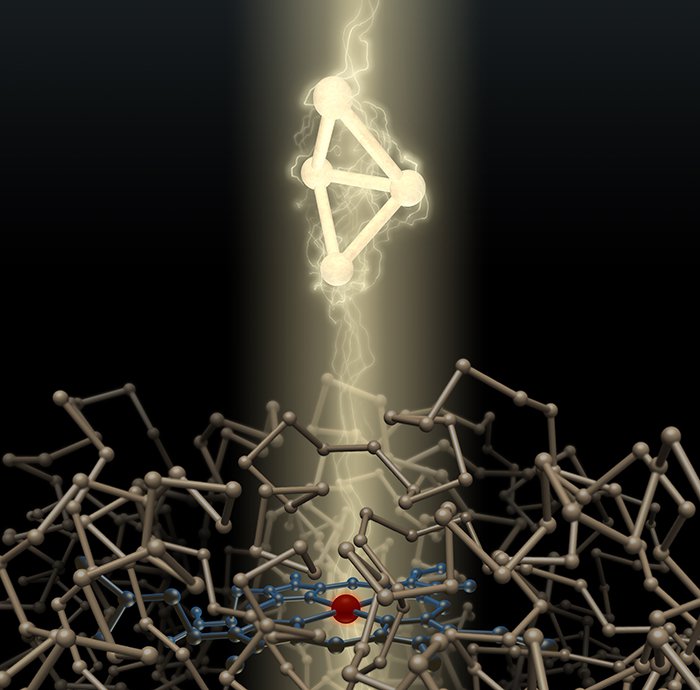 An artist's depiction of a bacterial enzyme and the high-energy carbon ring it created.
Credit: Caltech
Download Full Image
Subscribe
The Caltech Weekly