PASADENA, Calif.--Scientists at the California Institute of Technology (Caltech) have trained computers to automatically analyze aggression and courtship in fruit flies, opening the way for researchers to perform large-scale, high-throughput screens for genes that control these innate behaviors. The program allows computers to examine half an hour of video footage of pairs of interacting flies in what is almost real time; characterizing the behavior of a new line of flies "by hand" might take a biologist more than 100 hours.

This work--led by Pietro Perona, the Allen E. Puckett Professor of Electrical Engineering at Caltech, and David J. Anderson, the Roger W. Sperry Professor of Biology at Caltech, and a Howard Hughes Medical Institute Investigator--is detailed in the April issue of Nature Methods.

"Everyone wants to know how genes control behavior," notes Anderson. "But in order to apply powerful genetic analyses to complicated social behaviors like aggression and courtship, you need accurate ways of measuring--of scoring--those behaviors."

Previously, the only way to do this was to have students "watch video tapes over and over to record one particular type of behavior at a time," says Anderson. Using this method to measure a number of different types of behaviors--like lunging, tussling, chasing, circling, and copulating--or even to determine the way the flies orient their bodies or set their wings when they encounter another fly, requires the student to watch the same bit of video repeatedly, each time looking at the behavior of a single pair of flies. "In order to screen for mutations affecting aggressive behavior, we would have to analyze something like 2,000 pairs of flies," says Anderson. "It's been virtually impossible to do this without a small army of graduate students."

Enter Perona and Heiko Dankert, a postdoctoral scholar in electrical engineering. Using the techniques of machine vision and combining them with other engineering advancements, the two began training computers to see and recognize aggression and courtship behaviors. The result? An automated system that can monitor a wide variety of behaviors in videos of interacting fruit-fly pairs in a matter of minutes.

"This is a coming-of-age moment in this field," says Perona. "By choosing among existing machine vision techniques, we were able to put together a system that is much more capable than anything that had been demonstrated before."

The team fed the computer the characteristic details of what each individual behavior looks like on video. A lunge, for instance, begins with a shortening of the fly's body as the fly rears up; the fly then makes a quick darting movement, closing to within a few centimeters of another fly.

Once the computer had mastered these details, the researchers then compared the computer's analysis of a piece of video to the analysis produced by a human. "We looked at how many instances the computer caught, and how many it missed," says Anderson. "By looking at the errors the computer made, we were able to further refine our descriptions to create an even more accurate system."

In the end, Anderson notes, this back-and-forth resulted in a program that is "actually better than humans at detecting some of the instances of the various behaviors."

The next step, says Anderson, is to try to extend this automatic behavior-detection system to mice--a more difficult task when you're dealing with a fuzzy-edged creature like a mammal, but one that is important if we hope to some day link the genes behind fruit-fly behaviors with the genes that may cause similar behaviors in humans.

"Our visual system tells us a lot about what other people are doing--who is eating, who is beating someone else up, who is blushing, who got the guy or girl," Perona notes. "One goal of my field, computational vision, is designing machines that can detect and interpret human intentions, actions and activities. To do that, we need to start with organisms that are simpler and easier to study. David Anderson showed me how interesting and rich fly behaviors are, and so we started collaborating."

"There's a lot of information in these videos that we can now squeeze out in order to understand what controls these social interactions in flies," Anderson adds. "It makes it possible for us to study what we were not capable of studying before."

In addition to Anderson, Perona, and Dankert, other authors on the Nature Methods paper, "Automated Monitoring and Analysis of Social Behavior in Drosophila," include Caltech graduate student Liming Wang, and Eric Hoopfer, a Caltech postdoctoral scholar in biology.

This work was supported by the Howard Hughes Medical Institute, the National Science Foundation, and a Feodor Lynen fellowship awarded to Dankert by the Alexander von Humboldt Foundation. 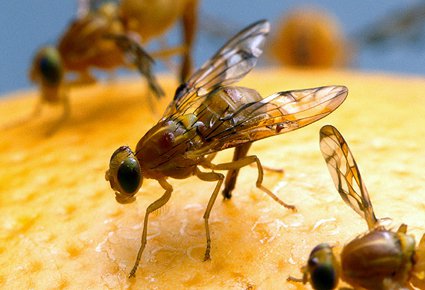