PASADENA, Calif.--Using novel imaging, labeling, and data-analysis techniques, scientists from the California Institute of Technology (Caltech) have been able to visualize, for the first time, large numbers of cells moving en masse during some of the earliest stages of embryonic development.

The findings not only provide insight into this stage of development--called gastrulation--but give a more general glimpse at how a living organism choreographs the motions of thousands of cells at one time. Previous research has been generally limited to imaging the movements of single cells.

The work was published in the December 5 issue of the journal Science.

The Caltech team observed the vast reorganization and migration of cells that occurs during gastrulation in Drosophila, the fruit fly. During gastrulation, a single-layered tube of cells collapses and then begins to spread. The scientists focused their attention on the movement of cells from two cross sections of that tube, paying particular attention to the movements of cells in the mesoderm--the inner layer of cells in the early embryo--relative to the cells in the ectoderm, or outer layer of cells. (The endoderm, the innermost of the three primary germ cell layers, has not yet formed at this stage of development.)

The researchers used a technique called two-photon excited fluorescence imaging to get a glimpse at what goes on during gastrulation in a living embryo. "This is the first time we've been able to see mesoderm cells within a developing Drosophila embryo," says Angelike Stathopoulos, assistant professor of biology at Caltech and the paper's principal investigator. "It was important not only because we were able to watch many cells move at one time, but because we were able to take that data and make sense of it."

Making sense of the data meant reducing the movement of each cell to a vector, and then analyzing that vector not just along its x, y, and z axes, but by looking at its cylindrical coordinates. "The spreading has both an angular and a radial component," Stathopoulos notes.

What the data showed was that the mesodermal cells move in a directed manner, traveling down and moving outward--diverging--at the same time. The ectoderm, on the other hand, moves down but converges as it goes. Thus, the mesoderm--which sits atop the ectoderm--passively rides the downward wave of ectodermal movement, but has to actively swim against the tide to spread outward. 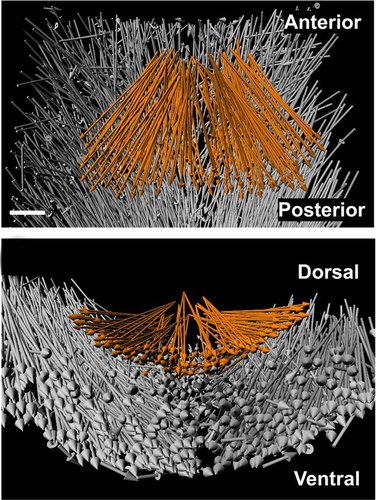 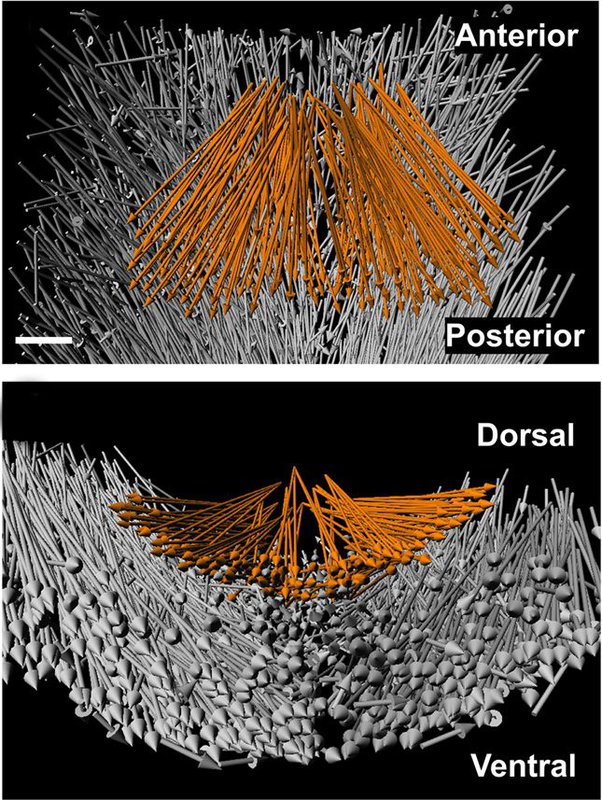 "It's as if the mesodermal cells are on a moving sidewalk," says Stathopoulos, "but as they're being moved along, they keep taking steps to the side."

The researchers found, in addition, that this choreography is anything but chaotic. The cells stayed in more or less the same order throughout their travels, following a set of "leader" cells and rarely if ever crossing over the midline of the pack.

"If you look at movies of the motion," says Stathopoulos, "you see all this jiggling, and you'd think the cells are mixing all around. And yet, they're not."

"We were able to follow the whole process," adds Scott Fraser, the Anna L. Rosen Professor of Biology, director of the Beckman Institute's Biological Imaging Center, and a paper coauthor. "We were able to label and watch the cells doing the motion, and the events that guide the motion."

In addition to looking at normal gastrulation, the scientists also looked at what happens to gastrulation when mutations occur. "We watched normal behavior, and the cues that guided it," says Fraser. "Then we could use the power of genetics to break one of the cues and analyze what was different, to determine how that cue was involved in the process. Being able to visualize groups of cells lets us do this in a more complex and powerful way. Before, you could say, 'It's broken.' Now, we can say how it is broken."

The findings turned up some other surprising tidbits about fruit-fly embryology, as well. For instance, while scientists had known that the cells in the mesoderm tended to divide twice during gastrulation, they didn't know if this was applicable only to a particular subset of cells, or if it was a hard-and-fast rule. Turns out, it was a rule. "We saw that each and every cell divides twice," says Stathopoulos. "Even more surprising, we saw that the timing of those divisions is based on the cells' original position in the tube--even though, by the time they divide, they've traveled from where they began. They actually remember where they came from."

While Stathopoulos says she's not yet sure what this timed division means, it's a clear sign that there are many more layers of order in embryonic development than had been previously suspected.

"What's fun about this," says Fraser, "is that all the different parts came together at the same time--genetics, labeling, imaging, analysis. It was like a perfect storm . . . in a good way."

The work detailed in the paper, "Dynamic Analyses of Drosophila Gastrulation Provide Insights into Collective Cell Migration," was supported by funding from the National Institutes of Health, the Searle Scholars Program, the March of Dimes, and Caltech's Beckman Institute. 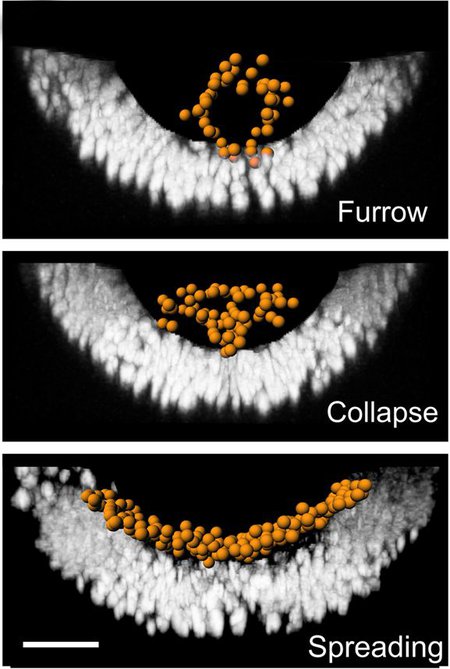 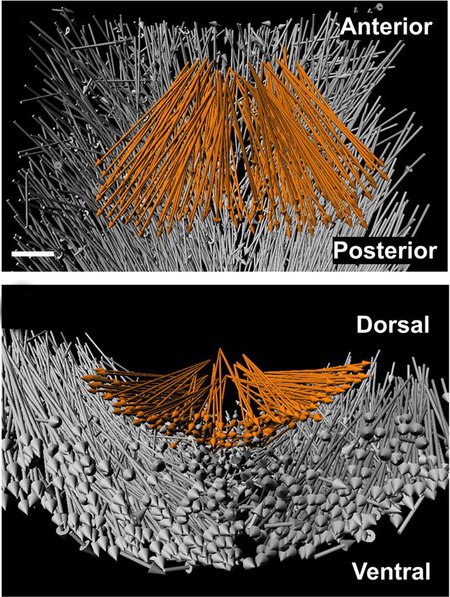 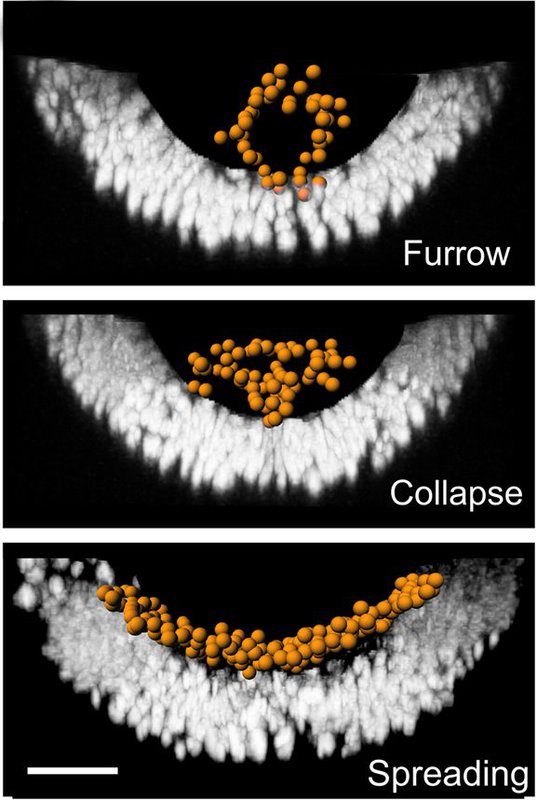