PASADENA, Calif.-- Researchers at the California Institute of Technology (Caltech) and their colleagues have found evidence of ancient climate change on Mars caused by regular variation in the planet's tilt, or obliquity. On Earth, similar "astronomical forcing" of climate drives ice-age cycles.

Using stereo topographic maps obtained by processing data from the high-resolution camera onboard NASA's Mars Reconnaissance Orbiter, the Caltech scientists, led by graduate student Kevin Lewis and Oded Aharonson, associate professor of planetary science, along with John Grotzinger, the Fletcher Jones Professor of Geology, identified and measured layered rock outcrops within four craters in the planet's Arabia Terra region. The layering in different outcrops occurs at scales ranging from a few meters to tens of meters, but at each location the layers all have similar thicknesses and exhibit similar features.

Based on a pattern of layers within layers measured at one location, known as Becquerel crater, the scientists propose that each layer was formed over a period of about 100,000 years and that these layers were produced by the same cyclical climate changes.

In addition, every 10 layers were bundled together into larger units, which were laid down over an approximately one-million-year period; in the Becquerel crater, the 10-layer pattern is repeated at least 10 times. This one-million-year cycle corresponds to a known pattern of change in Mars's obliquity caused by the dynamics of the solar system.

"Due to the scale of the layers, small variations in Mars's orbit are the best candidate for the implied climate changes. These are the very same changes that have been shown to set the pacing of ice ages on the Earth and can also lead to cyclic layering of sediments," says Lewis, the first author of a paper about the work published in this week's issue of Science. 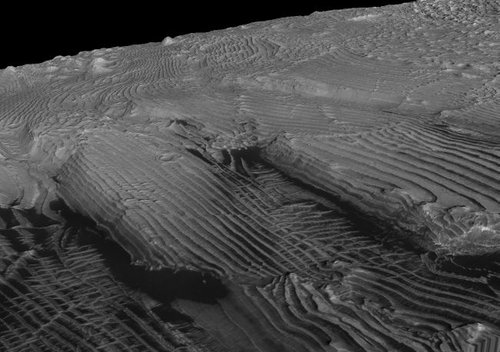 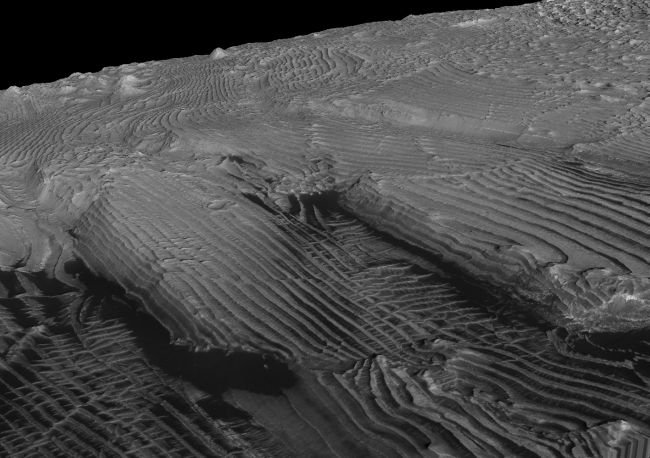 The tilt of Earth on its axis varies between 22.1 and 24.5 degrees over a 41,000-year period. The tilt itself is responsible for seasonal variation in climate, because the portion of the Earth that is tipped toward the sun--and that receives more sunlight hours during a day--gradually changes throughout the year. During phases of lower obliquity, polar regions are less subject to seasonal variations, leading to periods of glaciation.

Mars's tilt varies by tens of degrees over a 100,000-year cycle, producing even more dramatic variation. When the obliquity is low, the poles are the coldest places on the planet, while the sun is located near the equator all the time. This could cause volatiles in the atmosphere, like water and carbon dioxide, to migrate poleward, where they'd be locked up as ice.

When the obliquity is higher, the poles get relatively more sunlight, and those materials would migrate away. "That affects the volatiles budget. If you move carbon dioxide away from the poles, the atmospheric pressure would increase, which may cause a difference in the ability of winds to transport and deposit sand," Aharonson says. This is one effect that could change the rate of deposition of layers such as those seen by the researchers in the four craters.

Another effect of the changing tilt would be a change in the stability of surface water, which alters the ability of sand grains to stick together and cement in order to form the rock layers.

"The whole climate system would be different," Aharonson says.

However, such large changes in climate would influence a variety of geologic processes on the surface. While the researchers cannot tie the formation of the rhythmic bedding on Mars to any particular geologic process, "a strength of the paper is that we can draw conclusions without having to specify the precise depositional process," Aharonson says.

"This study gives us a hint of how the ancient climate of Mars operated, and shows a much more predictable and regular environment than you would guess from other geologic features that indicate catastrophic floods, volcanic eruptions, and impact events," Lewis adds. "More work will be required to understand the full extent of the information contained within these natural geologic archives," he says.

"One of the fun things about this project for me is that we were able to use techniques on Mars that are the bread and butter of studies of stratigraphy on Earth," says Aharonson. "We substituted a high-resolution camera in orbit around Mars and stereo processing for a geologist's Brunton Compass and mapboard, and were able to derive the same quantitative information on the same scale. This enabled conclusions that have qualitative meaning similar to those we chase on Earth."

The paper, "Quasi-Periodic Bedding in the Sedimentary Rock Record of Mars," will be published in the December 5 issue of Science. The work was supported by NASA's Mars Data Analysis Program and the NASA Earth and Space Science Fellowship program. 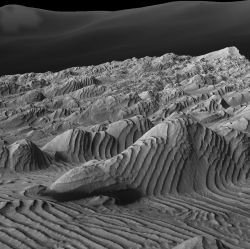 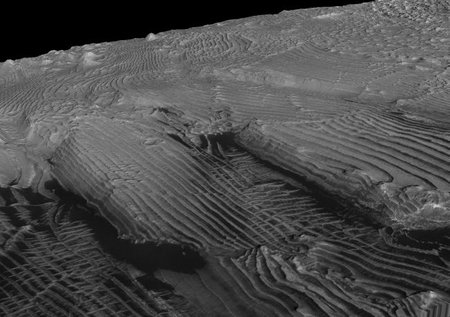