PASADENA, Calif.—The California Institute of Technology (Caltech) has recognized five of its graduates with the Distinguished Alumni Award, the highest honor regularly bestowed by the Institute. The award acknowledges a particular achievement, a series of achievements, or a career of achievements of noteworthy value. Since its inception in 1966, the award has been granted to outstanding alumni in the sciences, engineering, business, and the arts.

At the Institute for Systems Biology in Seattle, Leroy E. Hood is pioneering a transition from reactive medicine to proactive—predictive, preventive, personalized, and participatory, or "P4"—medicine. Rather than reacting to clinical symptoms after they appear, doctors might detect warning signs of disease by analyzing a pinprick of blood, then work together with the patient to take preventive action. While at Caltech, Hood developed groundbreaking instruments, including DNA and protein sequencers and synthesizers and the ink-jet printer for DNA arrays. When he moved to the University of Washington with support from Bill Gates, he became founder and chair of its molecular biotechnology department. Hood has published over 700 peer-reviewed papers, received 22 patents, and played a role in founding 13 biotechnology companies. He has coauthored textbooks on biochemistry, immunology, molecular biology, and genetics, and The Code of Codes, a popular book on the human genome project.

In 2009, Steven E. Koonin, chief scientist at BP from 2004 to 2009—where he developed the firm's long-range technology strategy for alternative and renewable energy sources as well as its university-based research programs—was confirmed by the U.S. Senate as undersecretary for science in the Department of Energy. A past member and chair of the JASON Study Group, advising the U.S. government on technical matters of national security, Koonin is a member of the Council on Foreign Relations and the Trilateral Commission. Koonin worked at Los Alamos National Laboratory as a summer graduate student for three years after receiving his BS from Caltech, received his PhD in theoretical physics from MIT in 1975, and joined Caltech's faculty that same year as an assistant professor. In 1981, he became professor of theoretical physics; he also served as chairman of the Caltech faculty (1989-1991) and as the Institute's seventh provost (1995-2004).

During the 1970s, Cleve B. Moler coauthored LINPACK and EISPACK, Fortran libraries for matrix computation. In the late 1970s, he wrote a simple matrix calculator for his students that he called MATLAB (for Matrix Laboratory) and, in 1984, he cofounded MathWorks to create a commercial version of the program. After leaving MathWorks in 1985—among other ventures, to help found the Intel Supercomputer Group—he returned to the company in 1989 to become its full-time chairman and chief scientist. Moler continues to work on the mathematical components of MATLAB as well as write books and articles about computational science. Moler has been a visiting faculty member at a number of universities and has received several honorary doctorates. He is a member of the National Academy of Engineering and has held various positions in SIAM, the Society for Industrial and Applied Mathematics, including a term as president.

Carolyn C. Porco—Imaging Team Leader for the Cassini-Huygens Mission and Director of the Cassini Imaging Central Laboratory for Operations

In 1983, Carolyn C. Porco joined the University of Arizona's department of planetary sciences and became a member of the Voyager Imaging Team. She played a key role in discoveries about the rings and moons of the outer planets, and co-originated the idea of taking a "portrait of the planets" with the Voyager spacecraft, producing, among other images, the famous Pale Blue Dot snapshot of Earth. In 1990, Porco was named Imaging Team leader for the Cassini-Huygens mission to Saturn. She is also director of the Cassini Imaging Central Laboratory for Operations (CICLOPS). She and her team have discovered new moons and rings, sighted a hydrocarbon lake in the south polar region of Titan, and discovered possible water geysers erupting from Enceladus, Saturn's sixth largest moon. Porco, who has had an asteroid named in her honor, is also a member of the imaging team for the New Horizons mission to Pluto and the Kuiper Belt.

Albert Y. C. Yu, chairman of OneAngstrom LLC and former senior vice president at Intel Corporation, has been active in investing and in mentoring high-technology companies as a member of boards and advisory councils. He is also chairman of the Kelvin Foundation and a founding member and an affiliate of Caltech's Information Science and Technology Advisory Board. A consulting professor at Stanford University, he has been supporting leading-edge research in the bioengineering, medical, and energy fields. Yu retired from Intel in 2002 after almost 30 years with the company. For more than 16 years, he served as general manager of the heart of Intel's business: microprocessors, chipsets, and software. Under his leadership, Intel's microprocessors have become the brains for almost all computing and Internet devices, which has propelled Intel to its position as the largest semiconductor company in the world. He also started Intel research laboratories worldwide. 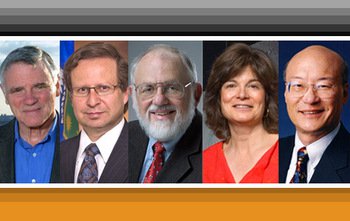