William "Bill" H. May, chairman of the board of directors of the Arnold and Mabel Beckman Foundation and former member of the advisory committee for Caltech's Division of Chemistry and Chemical Engineering, died October 10. He was 77.

May was born on December 28, 1942, in New Orleans and grew up in Baltimore, Maryland. He earned a bachelor's degree in mechanical engineering from Virginia Tech in 1964 and then served as a captain in the U.S. Air Force; he met his wife, Barbara, while stationed at former Norton Air Force Base in San Bernardino in 1969. In 1970, he earned a master's degree in engineering management from USC, and he earned a law degree from the University of Virginia in 1972.

He then began his career in corporate law and was hired as senior vice president, general counsel, and secretary for Beckman Instruments, the company founded by Arnold O. Beckman (PhD '28) to sell the pH meter he invented in 1934 while working as a professor at Caltech.

After his retirement, May served as chair of the board of directors of the Arnold and Mabel Beckman Foundation, which Beckman and his wife established in 1977. May continued to serve in that capacity until the time of his death.

"Bill led the Beckman Foundation with a steady hand. He will long be remembered for his strong support of fundamental research in the sciences," says Harry Gray, Arnold O. Beckman Professor of Chemistry and founding director of the Beckman Institute, which was established in 1989 with funding provided by the Beckman Foundation.

In 2015, May oversaw the donation of $10 million from the foundation to Caltech, establishing the Beckman-Gray Graduate Student Fellowship Fund, which has supported more than 70 first-year graduate students at Caltech.

He engaged in numerous philanthropic and service-oriented activities during his retirement, including serving as a member of the board of trustees of the San Diego Zoological Society, where he helped to establish the Mabel Beckman Center for Conservation Research at the San Diego Zoo Safari Park; and serving as a member of the advisory council for Caltech's Division of Chemistry and Chemical Engineering.

May is survived by his wife, Barbara; his son, Bill May, Jr., and his daughter, Meredith May; daughter-in-law, Patty and son-in-law, Emile; and his grandchildren, Emile Peter and Elizabeth May. 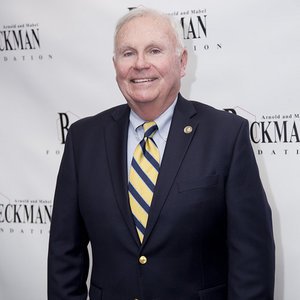