Stephen D. Bechtel, Jr., senior director of Bechtel Group Inc. and a life member of the Caltech Board of Trustees, passed away on March 15, 2021. He was 95 years old.

First appointed to the Caltech Board of Trustees in 1967, Bechtel was elected a life member of the Caltech community in 1997 and held this position until his death. He was a chair of the Buildings and Grounds Committee, and served as a consulting participant of the committee until his passing.

"The Bechtel name resonates with all of us on the Caltech campus, adorning the Bechtel Residence and serving as a testament to the Bechtel family's commitment to undergraduate life at the Institute," says Caltech president Thomas F. Rosenbaum, Sonja and William Davidow Presidential Chair and professor of physics. "Stephen Bechtel was a hands-on engineer and dedicated trustee who brought his many talents to bear on enhancing our intertwined mission of forefront research and education."

"Beyond his remarkable accomplishments as a business leader and philanthropist, Stephen was a lifelong friend of Caltech," says David L. Lee (PhD '74), chair of the Caltech Board of Trustees. "He was a champion for our students, enriching their experience at the Institute and preparing them for success in the future. He will be dearly missed."

Bechtel was born on May 10, 1925 in Oakland, California. After high school, he enlisted in the Marine Corps before earning a bachelor's degree in civil engineering from Purdue University in 1946 and a master's degree in business administration from Stanford University in 1948. That year, he joined Bechtel, a global engineering, construction, and project management company founded by his family in 1898 as a small Western railroad construction firm, and over its history was responsible for projects such as the Hoover Dam. He was the chief executive officer from 1960 until his retirement in 1990 and was chairman emeritus.

In 1957, he founded the S. D. Bechtel, Jr. Foundation, which supports education and environment programs in California. He served as vice chairman of the California Council for Science and Technology Task Force in 2006, advising the governor of California on increasing California's technical talent pool by improving K–12 science and mathematics education.

Among his many honors, Bechtel received the National Medal of Technology in 1991. He was elected a Fellow of the American Academy of Arts and Sciences in 1990 and the French Legion of Honor in 1979. In 1975, he was elected to the National Academy of Engineering (NAE), and he served as its first chairman from 1982 to 1986. In 1999, he was awarded the NAE Simon Ramo Founders Award.

Bechtel was named a National Honor Member of Chi Epsilon, the national civil engineering honor society, in 1990, and received the Honor Award of the National Building Museum in 1998. Among many other honors, he was the recipient of the American Society of Civil Engineers President's Award (1985), the Kenneth Andrew Roe Award from the American Association of Engineering Societies (2003), and the OPAL Award for Lifetime Achievement in Construction from the American Society of Civil Engineers (2000).

In 2015, Bechtel was inducted into the U.S. News and World Report STEM Leadership Hall of Fame.

He is survived by his wife, Betty Bechtel, five children, and numerous grandchildren and great-grandchildren. 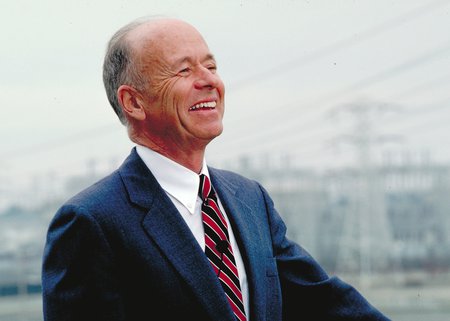