Taylor was born on December 27, 1932, in Holbrook, Arizona. Taylor and his twin brother grew up in Arizona and New Mexico before moving to Southern California with their parents in 1943. In 1949, Taylor won a scholarship from the American Chemical Society to attend Caltech.

At Caltech, Taylor was a member of Dabney House and played varsity football. He earned his bachelor's degree from Caltech in 1954, becoming one of the first two geochemistry majors to graduate from the Institute. After receiving a master's degree from Harvard in 1955, Taylor returned to Caltech for his PhD research, which involved the study of oxygen-isotope ratios with geochemist Samuel Epstein, his graduate adviser.

Taylor's graduate studies began at a particularly pivotal time for the geosciences at Caltech. Epstein had arrived only a few years earlier, and his three first graduate students (including Taylor) were working on the applications of stable isotopes to understanding processes in nature and in the laboratory, which at the time were essentially unexplored. Stable isotopes are naturally occurring nuclides of common elements that neither undergo radioactive decay nor accumulate from it. Subtle variations in their abundances, revealed through then-novel analytical technologies, can illuminate otherwise obscure chemical processes or environmental conditions.

Taylor's PhD research into oxygen isotopes set the foundation for the rest of his scientific career, as he recounted in a 2006 interview:

"I basically spent the rest of my life elaborating on it—because of course Earth and the planets and the solar system and much of the universe are all in large part made of oxygen, so you can study variations in oxygen isotopic composition in numerous compounds. [I also] worked a lot with hydrogen isotopes and carbon isotopes and silicon isotopes. They are all major components of the solar system, and particularly of the Earth. And this was in conjunction with what Sam Epstein was doing: He focused on a number of generalized things; I focused on rocks. And together we developed here at Caltech, I think without a doubt, the premier place for studying stable isotopes in the Earth and the planets."

"Over his long career, Hugh justified Sam's confidence in him to take on the task of making stable isotope geochemistry a critical component of solid-earth science," says Ed Stolper, Distinguished Professor of Geology. "With his broad background in physical science and in geology—and petrology in particular—Hugh roamed freely and widely to make key discoveries about how the earth and planets worked, spanning the full range of igneous and metamorphic rocks on Earth; igneous meteorites (now known to come from Mars and from the asteroid Vesta); the interactions of the oceans with the igneous crust that underlies them; the hydrothermal circulation cells that are set up around intrusive igneous rocks; the origins of ore deposits; and much more. Hugh was also a highly influential teacher and adviser, whose encyclopedic knowledge of the literature, canny feel for geological field problems, and razor-sharp rigor in classroom teaching made him a commanding intellectual presence in the scientific community within and beyond Caltech."

Taylor was one of a half dozen scientists from Caltech who were selected by NASA to receive samples of lunar materials collected by Apollo 11 astronauts Neil Armstrong and Buzz Aldrin. Along with Epstein, Taylor searched the samples for isotopes of oxygen, hydrogen, carbon, and other elements to determine the temperatures at which moon minerals were formed as well as any possible interactions between the rocks and water that might exist on the moon. Later isotope research by Taylor led to a new understanding of hydrothermal convection on Earth and the effects of rainwater on basaltic intrusions.

"Hugh was a polymath—interested and eventually an expert on essentially everything that he came across—and he had a photographic memory," says Stolper. Among his various passions, Taylor was engrossed by the Civil War and visited, with his wife, Candi, nearly all the major battlegrounds; he was equally knowledgeable and well-traveled about World War II.

In addition, Stolper says, Taylor "was an expert in the football program at USC and at one time planned to write a book on its history; and he was one of those people who knew seemingly all baseball statistics that exist. At a memorable Athenaeum dinner with a visiting colleague, Hugh figured out, after several questions, that our guest was the direct descendent of a famous 1910s baseball pitcher."

"Hugh loved and was fiercely loyal to Caltech, to its people, and to what he viewed as its essential role in American science and higher education," says John Eiler, Robert P. Sharp Professor of Geology and Geochemistry. "All who knew him will agree about not only his uniqueness and greatness as a scientist but also that he was larger than life with his ever-present booming laugh and voice. At the same time, he was a gentle and supportive friend and mentor to his students, colleagues, and friends."

Taylor is survived by his wife, Candi Taylor, and his son, Michael Broussard.

To make a donation to the Hugh and Candi Taylor Fund in support of Caltech's Division of Geological and Planetary Sciences, click here.

An abbreviated version of this obituary was originally published on October 28, 2021. 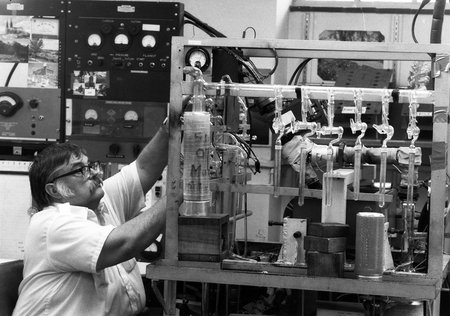 Taylor at work in the laboratory Credit: Courtesy of the Caltech Archives
Image Lightbox
Subscribe
The Caltech Weekly