Goodwin was best known for developing ways to grow thin films of high-purity diamond. Diamond films—transparent, scratch-resistant, and efficient dissipaters of the heat generated by high-powered computer chips—are now routinely used to protect electronic and optical components, and diamond-coated drill bits can be found at any hardware store.

But the diamond work was just one facet of Goodwin's research. According to longtime collaborator David Boyd, once a postdoc of Goodwin's and now a Caltech staff member, "Dave's real passion was modeling. He felt that he never fully understood something unless he could model it. He had a keen insight into how things work. He would proffer an oftentimes very simple explanation that captured the essential physics, and was able to see how that applied in engineering terms. It's really unusual for an engineer to know that much physics, or a physicist to have that much engineering."

The Mideast oil crises of Goodwin's teenage years sparked a lifelong interest in energy issues, and much of his work revolved around the intricacies of combustion. He fluently translated the complex interplay of heat flow and atomic behavior within swirling mixtures of turbulent gases into detailed mathematical models that accurately predicted how real-world, industrial-scale chemical processors would operate.

After earning his BS in engineering from Harvey Mudd College in 1979, Goodwin joined the Stanford University High Temperature Gasdynamics Laboratory, which was working on an ultraefficient method for generating electricity by burning coal at very high temperatures to create an electrically charged plasma. The process proved too expensive to be practical, but the mastery Goodwin acquired of chemical kinetics—the mathematical descriptions of how reactions proceed—set the course of his career. He earned his MS and PhD in 1980 and 1986 respectively, both in mechanical engineering.

Goodwin arrived at Caltech amid an explosion of interest in growing diamond coatings via chemical vapor deposition. The process is high-tech, but the basic idea is simple. Playing a methane flame over an object deposits carbon atoms on its surface, and under the right conditions these atoms will organize themselves into a sheen of high-purity diamond instead of the usual smudge of soot. "People had found a process that worked," says Boyd, "but really did not know how or why it did." Goodwin's models explained it all, and the set of papers he published beginning in 1990 "really turned artificial diamond into an engineering material," says Harry Atwater, the Hughes Professor and professor of applied physics and materials science, and director of the Resnick Sustainability Institute.

But far beyond that, "Dave was one of these people whose impact you measure by the codes he wrote for others to use," Atwater says. Goodwin began writing code in earnest in the 1990s, when he led the Virtual Integrated Prototyping project for the Defense Advanced Research Projects Agency. This sprawling endeavor, on which Atwater was a collaborator, created a set of simulations that began at the atomic level and went up to encompass an entire chemical reactor in order to figure out how to grow superconducting metal oxides and other thin films with demanding atomic arrangements. Atwater and Goodwin then built the reactor, which is still in use at Caltech and whose design has been widely copied.

Along the way, Goodwin wrote an extensive overhaul of CHEMKIN (for "chemical kinetics"), a collection of programs that had been developed at Sandia National Laboratories in the 1970s and had quickly gone into worldwide use. He then wrote—from scratch—his own software toolkit for modeling basic thermodynamics and chemical kinetics, which he dubbed Cantera. Breaking with the usual practice of creating a convoluted descriptor to yield a clever acronym, Cantera doesn't stand for anything, says Professor of Mechanical Engineering Tim Colonius. "He just wanted to give it a nice soothing, relaxing name, like pharmaceutical companies do. That was typical of his sense of humor." The open-source code is available pro bono and has been downloaded 120,000 times since 2004, according to Sandia's Harry Moffat, one of Cantera's current developers and the manager of the website. Says Moffat, "We have ventured into areas that CHEMKIN cannot go, including liquid-solid interactions and electrochemical applications such as batteries."

Goodwin also found time to court Frances Teng, an obstetrician-gynecologist at nearby Huntington Hospital, whose own parents had gotten married while postdocs at Caltech in the 1960s. Dave and Frances were married at the Athenaeum, Caltech's faculty club, in April 1993.

Goodwin eventually returned to the energy issues that had motivated him to become an engineer in the first place. "He really pushed us to start teaching some energy-related courses in the early 2000s," says Vice Provost Melany Hunt, the Kenan Professor of Mechanical Engineering, and the executive officer for mechanical engineering at the time. This led to ME 122, Sustainable Energy Engineering, which Goodwin inaugurated in 2008. ME 122 lives on as the centerpiece of the Energy Science and Technology option, now renumbered EST/EE/ME 109 and renamed Energy: Supply and Demand.

During that time Goodwin also collaborated on three major fuel-cell projects with Sossina Haile, professor of materials science and chemical engineering, in which he modeled the processes by which fuel molecules reacted with oxygen ions to produce electricity. "Dave was looking at it from a computational perspective, and we were looking at it from an experimental perspective," says Haile. "He pulled together all that we know from fundamental physics and chemistry to say, 'This is how the fuel cell works, and this is how to configure it so that it will actually deliver the power that you want.' Most people do a lot of parameter fitting and approximations, but he treated the problem in a very physics-based, solid way."

Goodwin was as active in the greater life of the Institute as he was in his lab. He served on the faculty board from 1996 to 1999 and from 2001 to 2005, the last two years as faculty chair. During that time, he successfully lobbied to extend the timetable for granting junior faculty tenure in cases of childbirth or adoption, Hunt says. "Dave was always concerned about diversity issues. He would say, 'Are there women coming in? Are there minority students coming in? We should make sure that we are doing things to ensure that we have a diverse group coming in to Caltech.'" Hunt recalls that when two young women wanted to take a class that wasn't offered that year, "Dave met with them in his office three times a week. He wanted to be helpful. He just felt a responsibility to do it."

"The thing that was remarkable about David Goodwin," says Haile, "was that when he was diagnosed with this rare form of cancer for which there is no rhyme or reason, he said, 'I'm so glad that I lived my life in a healthy way and that I didn't do anything that caused this,' not 'I can't believe I lived my life in such a healthy way, and it's so unfair that I got struck by this.' It was stunning. He had an incredibly optimistic view."

"Dave made you happy whenever you ran into him," says Kaushik Bhattacharya, the Howell N. Tyson, Sr., Professor of Mechanics and professor of materials science, and executive officer for mechanical and civil engineering. "You could go into his office and have a wonderful conversation about any topic in the world. He had an easy smile and a wicked sense of humor."

In his spare time, Goodwin was an accomplished guitarist, a skilled woodworker who made several pieces of furniture for the family's Craftsman house, and a prolific painter in oils.

Goodwin is survived by his parents, George and Verma Goodwin, of Cameron Park, California; his sisters, Ellen Goodwin Levy of Sacramento and Jennifer Goodwin Smith of Elk Grove; his wife, Frances Teng; and his children, Tim, 18, and Erica, 15.

A memorial service will be held on January 12, 2013, at 1:00 p.m. at the Caltech Athenaeum, and an annual speakership in mechanical engineering is being established in his honor; contributions to the David Goodwin Memorial Lectureship can be made here. 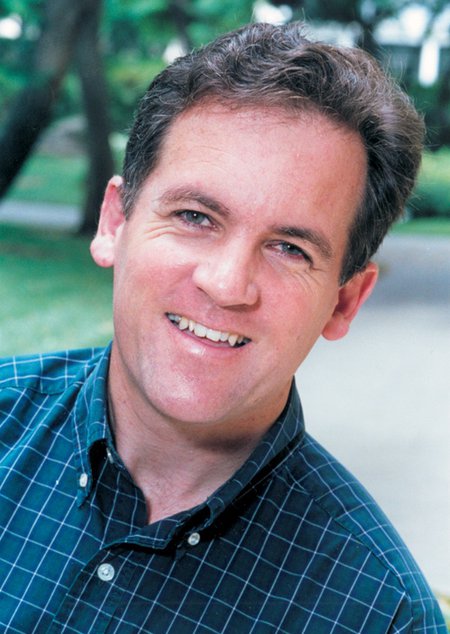 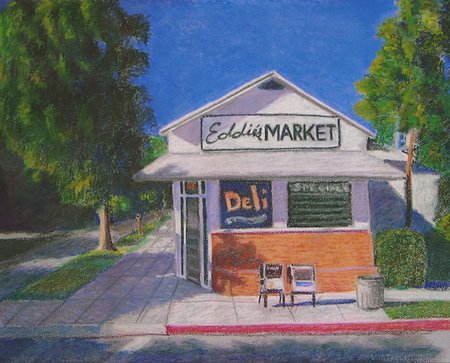 A block away from campus, Eddie's Market has sustained generations of Caltech grad students with hearty sandwiches and inexpensive kegs. Goodwin painted this in 2004. Credit: Courtesy of Frances Teng
Image Gallery Lightbox 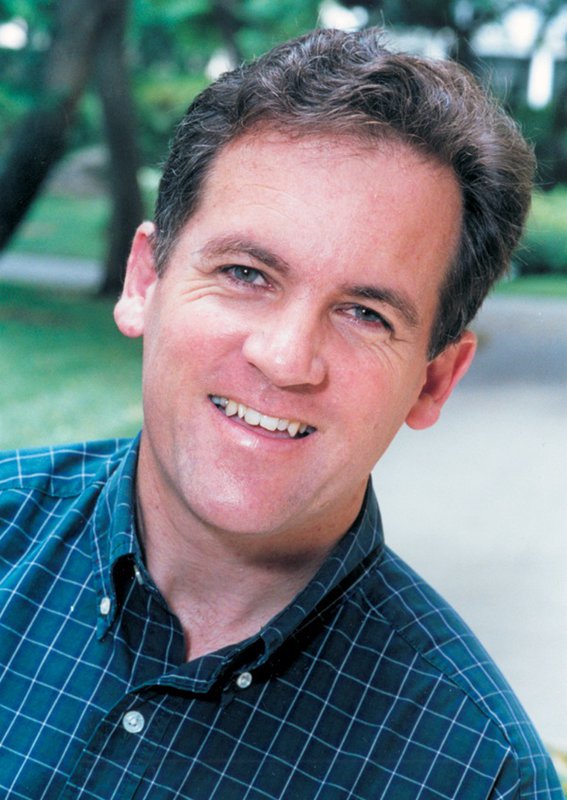 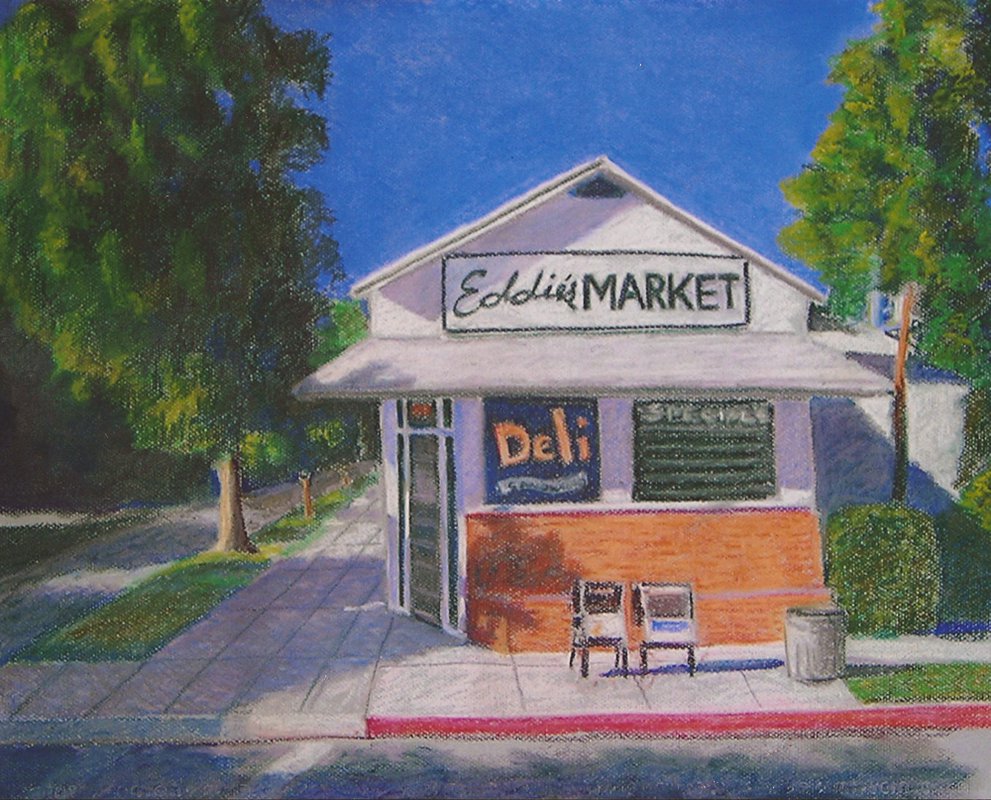 A block away from campus, Eddie's Market has sustained generations of Caltech grad students with hearty sandwiches and inexpensive kegs. Goodwin painted this in 2004.
Credit: Courtesy of Frances Teng
Download Full Image