The mission is a collaboration led by principal investigator Bethany Ehlmann, Caltech professor of planetary science, and managed by JPL, which Caltech manages for NASA. Other key partners include spacecraft provider Lockheed Martin and the University of Oxford, which provides one of Lunar Trailblazer's two instruments.

"We're excited to pioneer NASA's use of small satellites to answer big planetary science questions," says Ehlmann. "We expect Trailblazer will hugely advance our understanding of something we don't fully understand: the water cycle on airless bodies. Given the importance of water on the Moon for future robotic and human missions, the Lunar Trailblazer mission team is excited to provide the critical basemaps that will guide this future exploration."

The relatively tiny Trailblazer satellite, which will measure just 3.5 meters in length with its solar panels fully deployed, will spend over a year orbiting the Moon at a height of 100 kilometers, scanning it with two instruments: a visible-shortwave infrared imaging spectrometer built by JPL and a multispectral thermal imager built by the University of Oxford. These instruments will determine the amount and form of water on the Moon, which is not liquid but instead occurs as water ice in cold regions, as free molecules, or bound within minerals. As a NASA SIMPLEx (Small Innovative Missions for Planetary Exploration) program selection, Lunar Trailblazer achieves critical advancements for science as a lower-budget, ride-along mission.

"Lunar Trailblazer has a talented, multi-institutional team whose collective effort resulted in a successful formulation phase and confirmation review," says Calina Seybold, the mission's project manager at JPL. "I am thrilled that the team has earned the privilege of continuing to our final design and fabrication phase."

A key partnership is with Lockheed Martin Space, based out of Denver, Colorado, which will design, integrate, and test the Lunar Trailblazer spacecraft. The company brings its expertise from another SIMPLEx mission called Janus, which will explore asteroids, as well as decades of planetary missions across the solar system.

Joshua Wood, Lunar Trailblazer spacecraft manager at Lockheed Martin, says he is excited for what lies ahead: "Passing this key decision point means we have the green flag to proceed with production on the spacecraft. I'm very excited to see all the big science this compact spacecraft will surely bring back to us."

A key feature of Lunar Trailblazer is the large role for Caltech in executing the mission. In addition to Ehlmann's leadership as PI, co-investigator James Dickson, manager of the Bruce Murray Laboratory for Planetary Visualization, will direct the science data system. Mission operations will be run out of Caltech's IPAC, which brings long experience with space telescope science operations. Through a NASA-funded Student Collaboration Option, undergraduates from Caltech and nearby Pasadena City College are participating in mission communications and mission development, and will help staff operations. In addition to JPL, Lockheed Martin, University of Oxford, and PCC, the other key mission partners are the Applied Physics Laboratory, Brown University, Northern Arizona University, and the University of Central Florida.

"Some of the big questions about water on the Moon are: Does it vary as a function of time of day and temperature? Is it bound in rock or mobile? Why do some shadowed regions host water ice while others are empty, and how much is there at the lunar surface?" says Ehlmann. "We look forward to answering these questions with Lunar Trailblazer." 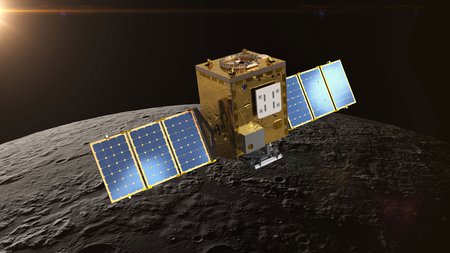