Not just anything is allowed to enter the nucleus, the heart of eukaryotic cells where, among other things, genetic information is stored. A double membrane, called the nuclear envelope, serves as a wall, protecting the contents of the nucleus. Any molecules trying to enter or exit the nucleus must do so via a cellular gatekeeper known as the nuclear pore complex (NPC), or pore, that exists within the envelope.

How can the NPC be such an effective gatekeeper—preventing much from entering the nucleus while helping to shuttle certain molecules across the nuclear envelope? Scientists have been trying to figure that out for decades, at least in part because the NPC is targeted by a number of diseases, including some aggressive forms of leukemia and nervous system disorders such as a hereditary form of Lou Gehrig's disease. Now a team led by André Hoelz, assistant professor of biochemistry at Caltech, has solved a crucial piece of the puzzle.

In February of this year, Hoelz and his colleagues published a paper describing the atomic structure of the NPC's coat nucleoporin complex, a subcomplex that forms what they now call the outer rings (see illustration). Building on that work, the team has now solved the architecture of the pore's inner ring, a subcomplex that is central to the NPC's ability to serve as a barrier and transport facilitator. In order to the determine that architecture, which determines how the ring's proteins interact with each other, the biochemists built up the complex in a test tube and then systematically dissected it to understand the individual interactions between components. Then they validated that this is actually how it works in vivo, in a species of fungus.

For more than a decade, other researchers have suggested that the inner ring is highly flexible and expands to allow large macromolecules to pass through. "People have proposed some complicated models to explain how this might happen," says Hoelz. But now he and his colleagues have shown that these models are incorrect and that these dilations simply do not occur.

"Using an interdisciplinary approach, we solved the architecture of this subcomplex and showed that it cannot change shape significantly," says Hoelz. "It is a relatively rigid scaffold that is incorporated into the pore and basically just sits as a decoration, like pom-poms on a bicycle. It cannot dilate."

Crystal Structure of Fungal Channel Nucleoporin Complex
This video features a rotating three-dimensional crystal structure of the fungal channel nucleoporin complex bound to the adaptor nucleoporin Nic96. This interaction is the complex's sole site of attachment to the rest of the inner ring of the NPC. The channel nucleoporin complex borders the central transport channel and fills it with filamentous structures (phenylalanine-glycine repeats) that form a diffusion barrier and provide docking sites for proteins that ferry molecules across the nuclear envelope. Credit: Andre Hoelz/Caltech and Science

Together, the inner and outer rings make up the symmetric core of the NPC, a structure that includes 21 different proteins. The symmetric core is so named because of its radial symmetry (the two remaining subcomplexes of the NPC are specific to either the side that faces the cell's cytoplasm or the side that faces the nucleus and are therefore not symmetric). Having previously solved the structure of the coat nucleoporin complex and located it in the outer rings, the researchers knew that the remaining components that are not membrane anchored must make up the inner ring.

They started solving the architecture by focusing on the channel nucleoporin complex, or channel, which lines the central transport channel and is made up of three proteins, accounting for about half of the inner ring. This complex produces filamentous structures that serve as docking sites for specific proteins that ferry molecules across the nuclear envelope.

The biochemists employed bacteria to make the proteins associated with the inner ring in a test tube and mixed various combinations until they built the entire subcomplex. Once they had reconstituted the inner ring subcomplex, they were able to modify it to investigate how it is held together and which of its components are critical, and to determine how the channel is attached to the rest of the pore.

Hoelz and his team found that the channel is attached at only one site. This means that it cannot stretch significantly because such shape changes require multiple attachment points. Hoelz notes that a new electron microscopy study of the NPC published in 2013 by Martin Beck's group at the European Molecular Biology Laboratory (EMBL) in Heidelberg, Germany, indicated that the central channel is bigger than previously thought and wide enough to accommodate even the largest cargoes known to pass through the pore.

When the researchers introduced mutations that effectively eliminated the channel's single attachment, the complex could no longer be incorporated into the inner ring. After proving this in the test tube, they also showed this to be true in living cells.

"This whole complex is a very complicated machine to assemble. The cool thing here is that nature has found an elegant way to wait until the very end of the assembly of the nuclear pore to incorporate the channel," says Hoelz. "By incorporating the channel, you establish two things at once: you immediately form a barrier and you generate the ability for regulated transport to occur through the pore." Prior to the channel's incorporation, there is simply a hole through which macromolecules can freely pass.

Next, Hoelz and his colleagues used X-ray crystallography to determine the structure of the channel nucleoporin subcomplex bound to the adaptor nucleoporin Nic96, which is its only nuclear pore attachment site. X-ray crystallography involves shining X-rays on a crystallized sample and analyzing the pattern of rays reflected off the atoms in the crystal. Because the NPC is a large and complex molecular machine that also has many moving parts, they used an engineered antibody to essentially "superglue" many copies of the complex into place to form a nicely ordered crystalline sample. Then they analyzed hundreds of samples using Caltech's Molecular Observatory—a facility developed with support from the Gordon and Betty Moore Foundation that includes an automated X-ray beam line at the Stanford Synchrotron Radiation Laboratory that can be controlled remotely from Caltech—and the GM/CA beam line at the Advanced Photon Source at the Argonne National Laboratory. Eventually, they were able to determine the size, shape, and position of all the atoms of the channel nucleoporin subcomplex and its location within the full NPC.

"The crystal structure nailed it," Hoelz says. "There is no way that the channel is changing shape. All of that other work that, for more than 10 years, suggested it was dilating was wrong."

The researchers also solved a number of crystal structures from other parts of the NPC and determined how they interact with components of the inner ring. In doing so they demonstrated that one such interaction is critical for positioning the channel in the center of the inner ring. They found that exact positioning is needed for the proper export from the nucleus of mRNA and components of ribosomes, the cell's protein-making complexes, rendering it critical in the flow of genetic information from DNA to mRNA to protein.

Hoelz adds that now that the architectures of the inner and outer rings of the NPC are known, getting an atomic structure of the entire symmetric core is "a sprint to the summit."

"When I started at Caltech, I thought it might take another 10, 20 years to do this," he says. "In the end, we have really only been working on this for four and a half years, and the thing is basically tackled. I want to emphasize that this kind of work is not doable everywhere. The people who worked on this are truly special, talented, and smart; and they worked day and night on this for years."

Ultimately, Hoelz says he would like to understand how the NPC works in great detail so that he might be able to generate therapies for diseases associated with the dysfunction of the complex. He also dreams of building up an entire pore in the test tube so that he can fully study it and understand what happens as it is modified in various ways. "Just as they did previously when I said that I wanted to solve the atomic structure of the nuclear pore, people will say that I'm crazy for trying to do this," he says. "But if we don't do it, it is likely that nobody else will." 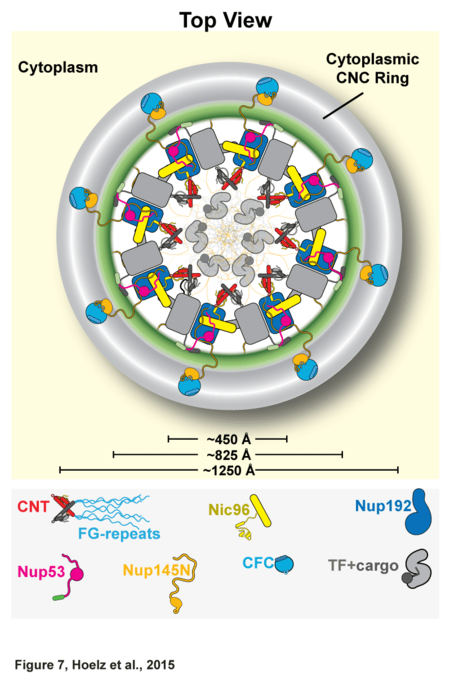 The architecture of the inner ring of the NPC proposed by the Caltech-led team. The channel nuceloporin complex (labeled here as CNT) is attached at only one site, the adaptor nucleoprin Nic96. This helps prove that the channel does not change shape or dilate. Credit: Hoelz Laboratory/Caltech
Image Gallery Lightbox 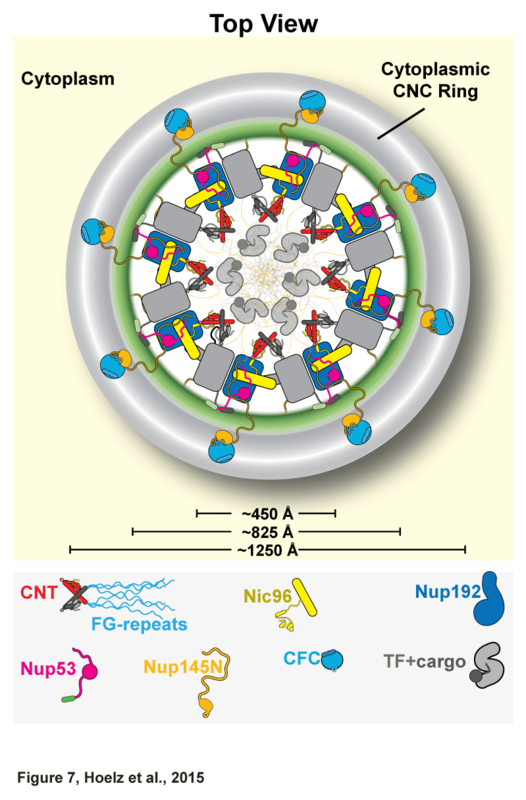 The architecture of the inner ring of the NPC proposed by the Caltech-led team. The channel nuceloporin complex (labeled here as CNT) is attached at only one site, the adaptor nucleoprin Nic96. This helps prove that the channel does not change shape or dilate.
Credit: Hoelz Laboratory/Caltech
Download Full Image