A Caltech chemical engineer who normally develops new ways to fabricate microprocessors in computers has figured out how to explain a nagging mystery in space—why comets expel oxygen gas, the same gas we humans breathe.

The discovery that comets produce oxygen gas—also referred to as molecular oxygen or O2—was announced in 2015 by researchers studying the comet 67P/Churyumov–Gerasimenko with the European Space Agency's Rosetta spacecraft. The mission unexpectedly found abundant levels of molecular oxygen in the comet's atmosphere. Molecular oxygen in space is highly unstable, as oxygen prefers to pair up with hydrogen to make water, or carbon to make carbon dioxide. Indeed, O2 has only been detected twice before in space in star-forming nebulas.

Scientists have proposed that the molecular oxygen on comet 67P/Churyumov–Gerasimenko might have thawed from its surface after having been frozen inside the comet since the dawn of the solar system 4.6 billion years ago. But questions persist because some scientists say the oxygen should have reacted with other chemicals over all that time.

A professor of chemical engineering at Caltech, Konstantinos P. Giapis, began looking at the Rosetta data because the chemical reactions happening on the comet's surface were similar to those he has been performing in the lab for the past 20 years. Giapis studies chemical reactions involving high-speed charged atoms, or ions, colliding with semiconductor surfaces as a means to create faster computer chips and larger digital memories for computers and phones.

"I started to take an interest in space and was looking for places where ions would be accelerated against surfaces," says Giapis. "After looking at measurements made on Rosetta's comet, in particular regarding the energies of the water molecules hitting the comet, it all clicked. What I've been studying for years is happening right here on this comet."

In a new Nature Communications study, Giapis and his co-author, postdoctoral scholar Yunxi Yao, demonstrate in the lab how the comet could be producing oxygen. Basically, water vapor molecules stream off the comet as the cosmic body is heated by the sun. The water molecules become ionized, or charged, by ultraviolet light from the sun, and then the sun's wind blows the ionized water molecules back toward the comet. When the water molecules hit the comet's surface, which contains oxygen bound in materials such as rust and sand, the molecules pick up another oxygen atom from the surface and O2 is formed.

In other words, the new research implies that the molecular oxygen found by Rosetta need not be primordial after all but may be produced in real time on the comet.

"We have shown experimentally that it is possible to form molecular oxygen dynamically on the surface of materials similar to those found on the comet," says Yao.

"We had no idea when we built our laboratory setups that they would end up applying to the astrophysics of comets," says Giapis. "This original chemistry mechanism is based on the seldom-considered class of Eley-Rideal reactions, which occur when fast-moving molecules, water in this case, collide with surfaces and extract atoms residing there, forming new molecules. All necessary conditions for such reactions exist on comet 67P."

Other astrophysical bodies, such as planets beyond our solar system, or exoplanets, might also produce molecular oxygen with a similar "abiotic" mechanism—without the need for life. This may influence how researchers search for signs of life on exoplanets in the future.

"Oxygen is an important molecule, which is very elusive in interstellar space," says astronomer Paul Goldsmith of JPL, which is managed by Caltech for NASA. Goldsmith is the NASA project scientist for the European Space Agency's Herschel mission, which made the first confirmed detection of molecular oxygen in space in 2011. "This production mechanism studied in Professor Giapis's laboratory could be operating in a range of environments and shows the important connection between laboratory studies and astrochemistry." 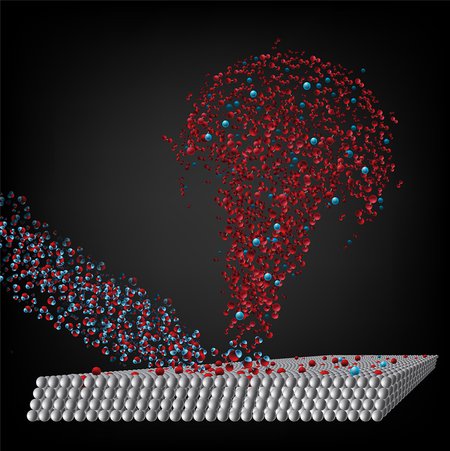 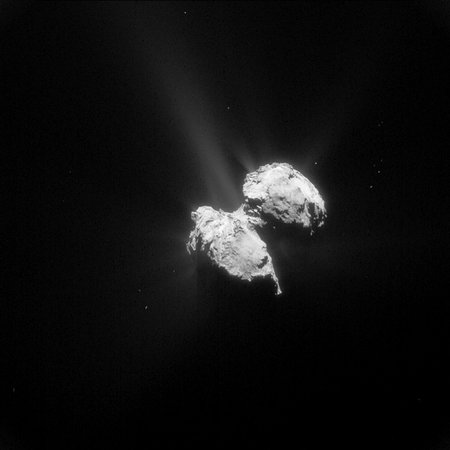 Image of comet 67P/Churyumov-Gerasimenko taken by the Rosetta spacecraft. This image has been enhanced to bring out the details of the comet's activity. Credit: ESA/Rosetta/NAVCAM, CC BY-SA IGO 3.0 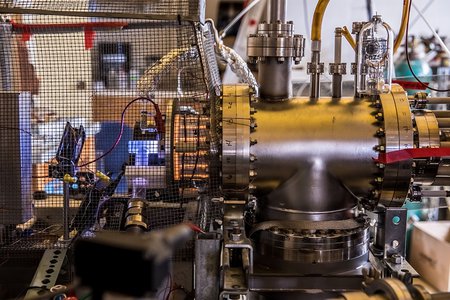 An experiment in the lab of Caltech's Konstantinos Giapis. A professor of chemical engineering, Giapis performs tests with high-speed ions to study reaction dynamics at surfaces, the results of which can be used to improve methods for fabricating semiconductor devices. Water ions are generated in a plasma reactor, seen at left, which glows to produce white-blue light. Credit: Caltech 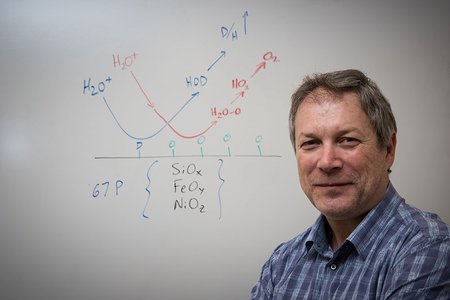 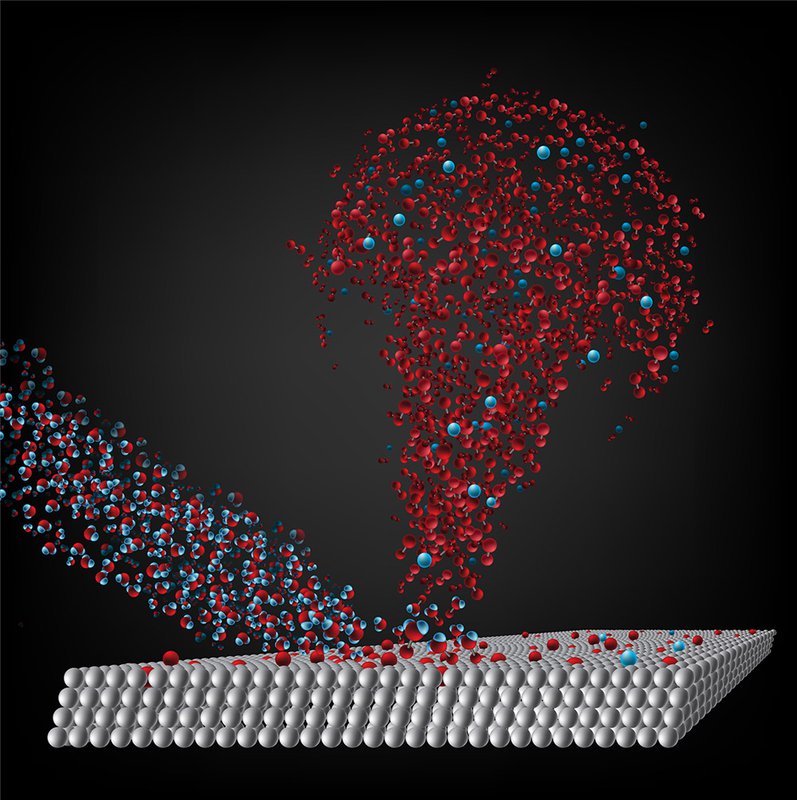 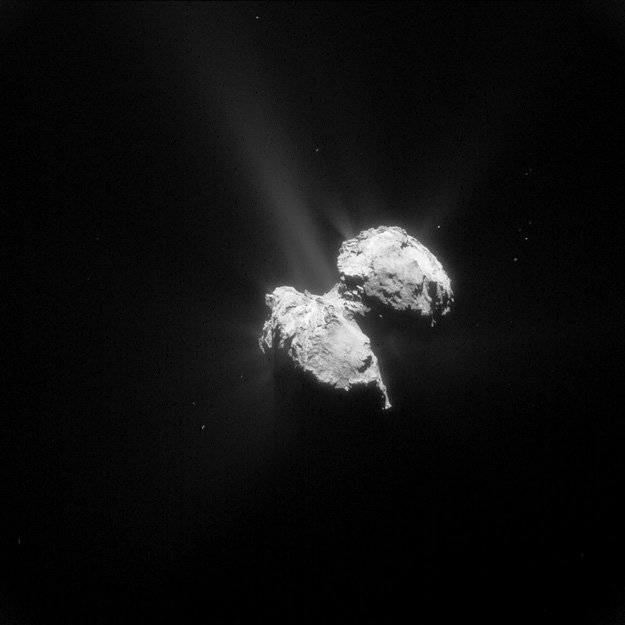 Image of comet 67P/Churyumov-Gerasimenko taken by the Rosetta spacecraft. This image has been enhanced to bring out the details of the comet's activity.
Credit: ESA/Rosetta/NAVCAM, CC BY-SA IGO 3.0
Download Full Image 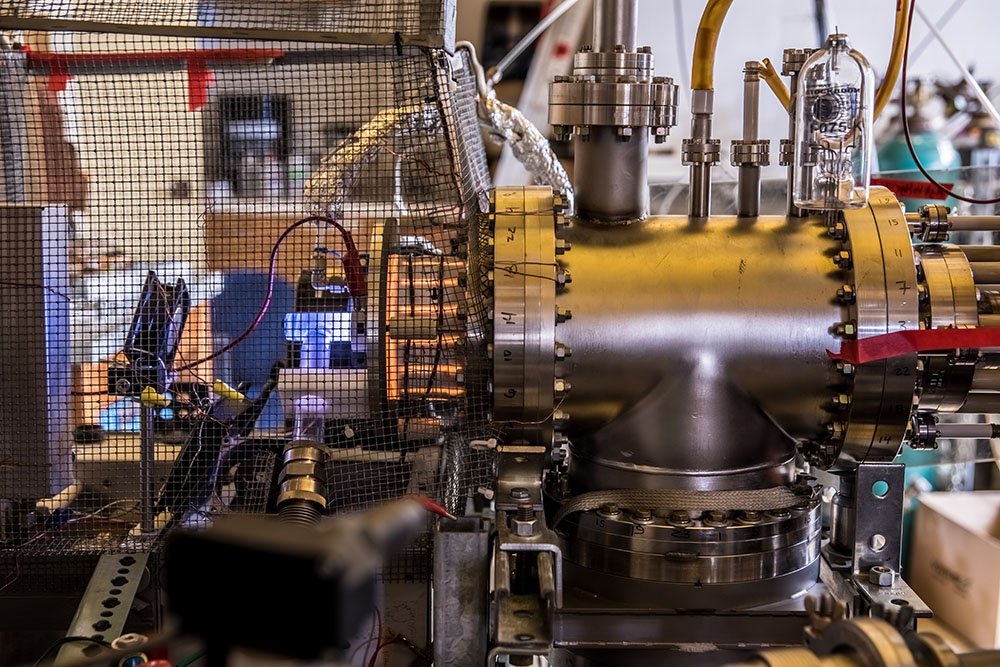 An experiment in the lab of Caltech's Konstantinos Giapis. A professor of chemical engineering, Giapis performs tests with high-speed ions to study reaction dynamics at surfaces, the results of which can be used to improve methods for fabricating semiconductor devices. Water ions are generated in a plasma reactor, seen at left, which glows to produce white-blue light.
Credit: Caltech
Download Full Image 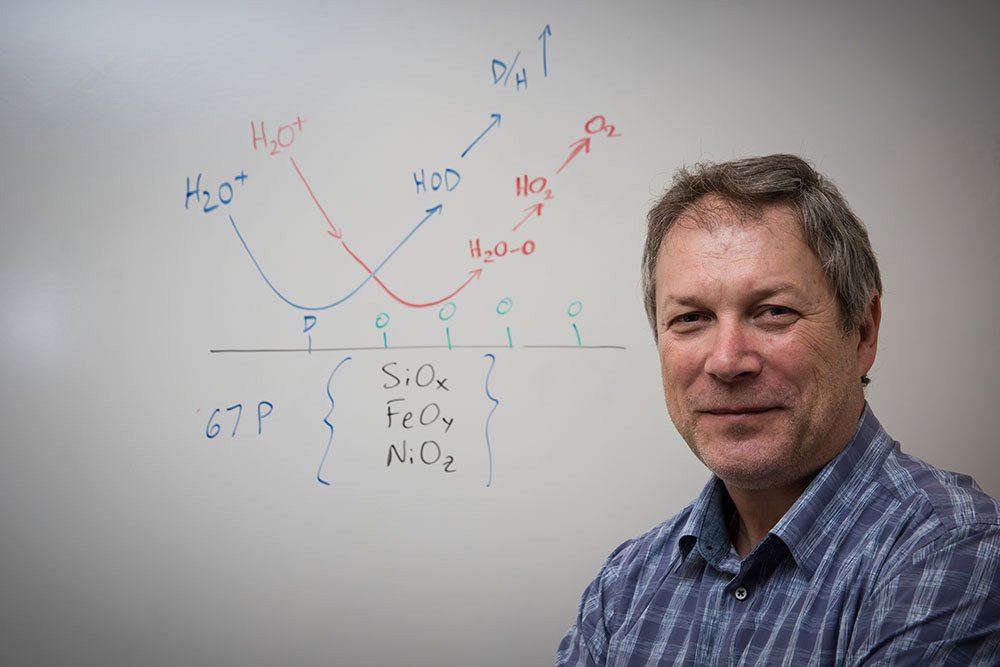