Caltech celebrated its 62nd Annual Service and Impact Awards on Thursday, June 1, 2017, honoring 397 staff members—with service ranging from 10 to 45 years—for their on-the-job excellence and commitment to the Institute. Together, these employees have put in more than 6,800 years of service to Caltech.

Contributing more than his fair share of time to that total was Michael Walsh, an engineer in the Division of Biology and Biological Engineering (BBE), whose 45 years of service to the Institute was the highest honored at the event. Seven other Caltech staffers were celebrated for 40 years of service, with an additional 15 highlighted for their 35 years. The Division of Physics, Mathematics and Astronomy had the most honorees with 84, noted Julia McCallin, Caltech's associate vice president for human resources, who kicked off the event, held in Beckman Auditorium.

Mary Webster, secretary of the Caltech Board of Trustees, who was celebrated in 2016 for her 50 years of service to Caltech, addressed the packed audience of community and family members, talking about her "profound belief that each and every one of us, no matter our position, plays a significant role in furthering the mission of this institution." She noted that, in looking at the job titles of those being honored, there were a few whose title included the phrase "general helper."

"That is a title that I feel should be appended to each of our job descriptions," she said. "It is the simple essence of how I have approached my positions—to be a general helper, one who enables the people in [other] positions to do their best possible work."

The 2017 Thomas W. Schmitt Annual Staff Prize went to Phyllis Burton, who works in purchasing as the contracting officer for BBE. The award celebrates staff members "whose contributions embody the values and spirit that enable the Institute to achieve excellence in research and education."

In nominating her for the honor, Burton's colleagues called her professional, dedicated, warm, and knowledgeable. "There have been so many times over the past few years that I have run to Phyllis with questions or issues," said one nomination. "She knows everything and is our division's savior."

Another noted, "She is a problem solver and represents Caltech in such a wonderful way!"

The Schmitt Prize was established in 2007 in honor of Thomas W. Schmitt, former associate vice president for human resources, and is funded by Ted Jenkins, Caltech alumnus (BS '65, MS '66) and trustee. Both Schmitt and Jenkins were in attendance at the ceremony.

The second annual Team Impact Award—created in 2016 to honor teams that make significant contributions to the work and mission of the Institute—was given to the staff of the Caltech Center for Diversity (CCD). Its nomination noted the CCD staff's "unwavering commitment to inclusion" and said that the Institute "would be much poorer without the tireless efforts and inimitable diligence, kindness, and care of this team." The CCD's team members include Hanna Song, Taso Dimitriadis, Erin-Kate Escobar, Azani Pinkney, and Marlene Moncada.

In closing the event, Caltech president Thomas F. Rosenbaum lauded the Institute's staff. "This is hard work," he noted, "but it is noble work, it is incredible work. As we toil in this way, we know it is not only for the reward of a job well done now, but also for making a statement about our greatest passions, our greatest wishes, our greatest ideals for our children and our grandchildren." 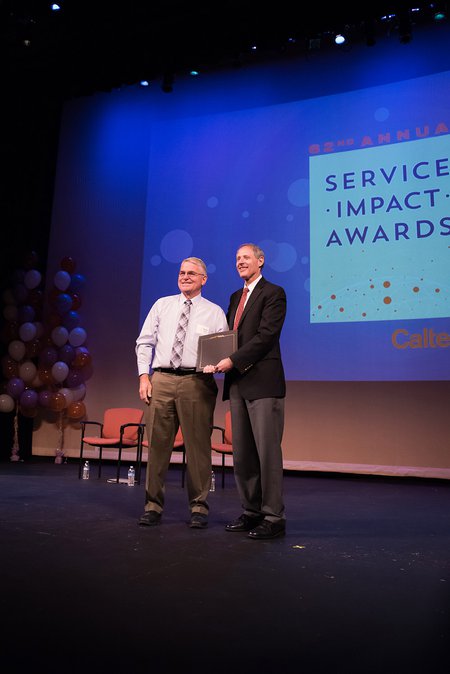 Michael Walsh, an engineer in the Division of Biology and Biological Engineering, was honored for his 45 years of service to the Institute. Credit: Caltech
Image Lightbox 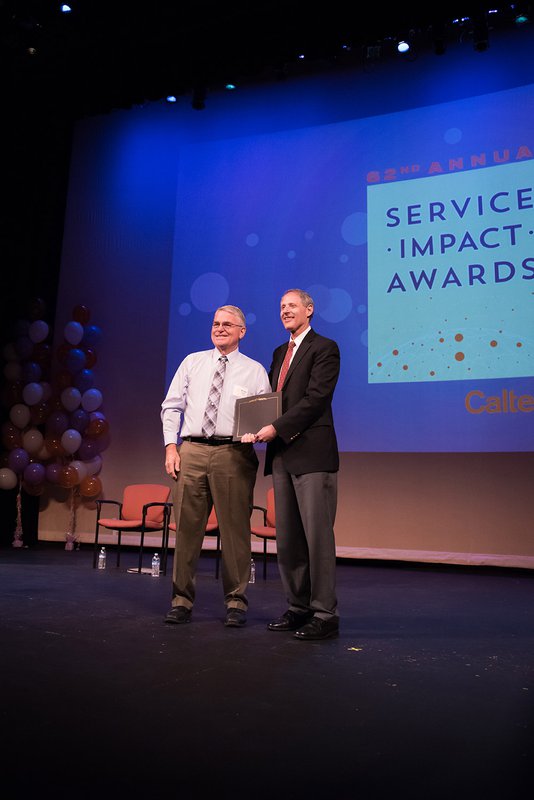 Michael Walsh, an engineer in the Division of Biology and Biological Engineering, was honored for his 45 years of service to the Institute.
Credit: Caltech
Download Full Image
Subscribe
The Caltech Weekly