The program kicked off with a video montage of well-wishers, including Caltech Nobel laureate Frances Arnold, Caltech faculty and staff members, Modern Family actress Ariel Winter, and a talking turtle from Throop Memorial Garden. The speakers congratulated the grads and anticipated successful careers filled with notable achievements. In concluding, Harry Gray, Arnold O. Beckman Professor of Chemistry and founding director of the Beckman Institute, urged graduates to "have a little fun along the way."

Caltech president Thomas F. Rosenbaum opened the ceremony, noting the unusual circumstances of the event and emphasizing that "even in separation, community can triumph."

David Lee (PhD '74), chair of the Caltech Board of Trustees, described his own commencement as one "clouded by war and other challenges … [but] focused on scientific integrity."

Then, as now, he said, scientific integrity remains one of the core values that Caltech imparts to its students, along with a "commitment to truth, to the vigorous and open exchange of ideas, to the joys of discovery. ... So, despite the challenges we face, I know you are amply prepared to contribute meaningfully to the world."

In a series of one-minute segments that followed, Caltech luminaries provided "last lessons" for the graduates, praising them for their determination, dedication, and ambition to change the world for the better.

Among them was Nobel Laureate Kip Thorne (BS '62), the Richard P. Feynman Professor of Theoretical Physics, Emeritus, who said, "Your Caltech education is a great foundation for joining with people from all walks of life in working to rebuild a much better and more equitable America and world."

Astrophysicist France Córdova (PhD '79), former director of the National Science Foundation and a Caltech trustee, discussed the high expectations placed on graduates of the Institute but noted that, "with your Caltech background, you are prepared to make a difference." She challenged them to do exactly that and, in the words of T. S. Elliot, to "dare to disturb the universe."

Debra Dison Hall (BS '74), one of 31 women in the first undergraduate class to enroll women, who joined the Institute 50 years ago this fall, urged graduates to make their voices heard. "Not everyone has to be the leader, the Nobel laureate, or has an exclusive on being right...," she said. "The world needs you and what you have to say."

A roll call briefly displayed a photo of almost every graduate in turn, along with the diploma they received and the division that awarded it.

The Mabel Beckman Prize, awarded annually to female juniors or seniors, recognizes academic and personal excellence, contributions to the Institute community, and outstanding character and leadership. It was awarded to Sunny Cui and Nivetha Karthikeyan.

The Frederic W. Hinrichs, Jr., Memorial Award recognizes the seniors who, in the opinion of the undergraduate deans, made the greatest contribution to the student body during their undergraduate years. The award was given to Allison Wang and Alexander Wuschner.

The George W. Housner Prize for Academic Excellence and Original Research is given to a senior who has demonstrated excellence in scholarship and in the preparation of an outstanding piece of original scientific research. This year's Housner Prize was presented to Allison Wang.

Traditionally, the recipient of the final award, the Milton and Francis Clauser Doctoral Prize, is first announced at commencement, and this year was no exception. Rosenbaum first explained that the Clauser Prize is awarded to a student whose PhD thesis reflects extraordinary standards of quality, innovative research, ingenuity, and especially the potential of opening new avenues of human thought and endeavor; he then passed the announcement over to Frances Arnold, the Linus Pauling Professor of Chemical Engineering, Bioengineering and Biochemistry, and the academic adviser of this year's recipient, Kai Chen. Chen was given the prize for his thesis, "Expanding the Catalytic Repertoire of Hemeproteins as Carbene Transferases to Access Diverse Molecular Structures." In presenting the award, Arnold said, "Kai has brought to the biological world a whole new chemistry that nature never previously exploited."

In closing the event, Rosenbaum told students that the world awaiting them after graduation will be "complicated and daunting" but also filled with boundless potential and opportunities. In that world, he said, "You are among the privileged who can make a difference. I wish you wholeness and magic on your journey forward."

Many people participated in online watch parties; friends and family gathered for video chats to comment on the proceedings in real time. One party hosted by the Caltech Y attracted dozens of participants who cheered students from their respective homes, marking the occasion with festive hats, congratulatory signs, and festive graduation- and campus-themed digital backgrounds.

Throughout the event, family members honored their graduates on social media, for example with photos on Twitter displaying present-day graduates alongside their elementary-school-age selves. On YouTube, hundreds of commencement viewers watching the live event called out variations of "Congrats!" to graduates in the chat window, tossing in exclamation points and emojis like handfuls of confetti.

In a post-commencement videoconference, more than 200 people gathered to toast the 2020 graduates, hosted by Rosenbaum and Professor Katherine T. Faber who raised their glasses of Prosecco for the occasion. Rosenbaum told the participants, "Caltech is always your home. You've graduated, but you've graduated to become part of an even bigger community that is the Caltech alumni, and we hope that those connections will serve you well for the rest of your life. … A toast to your success and to changing the world for the better."

View a recording of the ceremony at commencement.caltech.edu/watch. 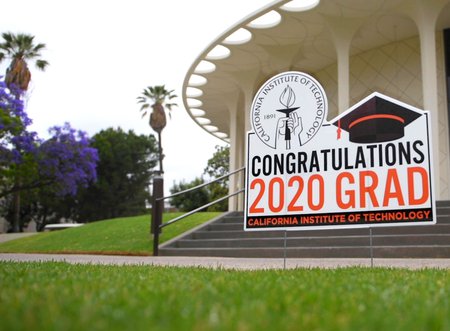 A sign in front of Beckman Auditorium offers congratulations to the Class of 2020. 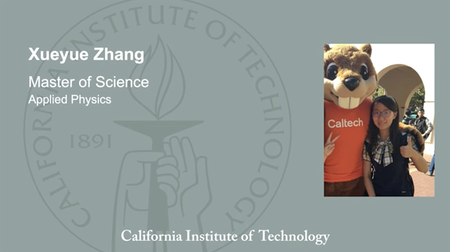 A roll call of graduates featured title cards with each person's name and degree. 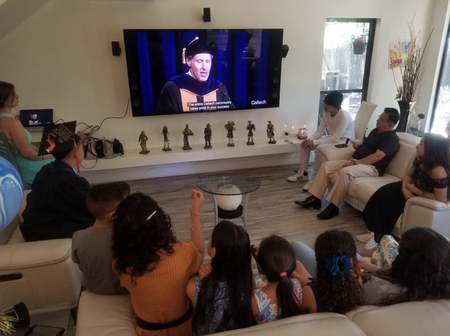 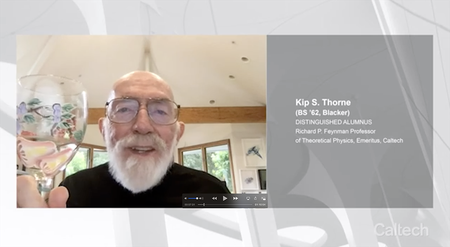