Caltech Astronomers Observe a Supernova Colliding with Its Companion Star

Type Ia supernovae, some of the most dazzling phenomena in the universe, are produced when small dense stars called white dwarfs explode with ferocious intensity. At their peak, these supernovae can outshine an entire galaxy. Although thousands of supernovae of this kind were found in the last decades, the process by which a white dwarf becomes one has been unclear.

That began to change on May 3, 2014, when a team of Caltech astronomers working on a robotic observing system known as the intermediate Palomar Transient Factory (iPTF)—a multi-institute collaboration led by Shrinivas Kulkarni, the John D. and Catherine T. MacArthur Professor of Astronomy and Planetary Science and director of the Caltech Optical Observatories—discovered a Type Ia supernova, designated iPTF14atg, in nearby galaxy IC831, located 300 million light-years away.

The data that were immediately collected by the iPTF team lend support to one of two competing theories about the origin of white dwarf supernovae, and also suggest the possibility that there are actually two distinct populations of this type of supernova.

The details are outlined in a paper with Caltech graduate student Yi Cao the lead author, appearing May 21 in the journal Nature.

Type Ia supernovae are known as "standardizable candles" because they allow astronomers to gauge cosmic distances by how dim they appear relative to how bright they actually are. It is like knowing that, from one mile away, a light bulb looks 100 times dimmer than another located only one-tenth of a mile away. This consistency is what made these stellar objects instrumental in measuring the accelerating expansion of the universe in the 1990s, earning three scientists the Nobel Prize in Physics in 2011.

There are two competing origin theories, both starting with the same general scenario: the white dwarf that eventually explodes is one of a pair of stars orbiting around a common center of mass. The interaction between these two stars, the theories say, is responsible for triggering supernova development. What is the nature of that interaction? At this point, the theories diverge.

According to one theory, the so-called double-degenerate model, the companion to the exploding white dwarf is also a white dwarf, and the supernova explosion initiates when the two similar objects merge.

However, in the second theory, called the single-degenerate model, the second star is instead a sunlike star—or even a red giant, a much larger type of star. In this model, the white dwarf's powerful gravity pulls, or accretes, material from the second star. This process, in turn, increases the temperature and pressure in the center of the white dwarf until a runaway nuclear reaction begins, ending in a dramatic explosion.

The difficulty in determining which model is correct stems from the facts that supernova events are very rare—occurring about once every few centuries in our galaxy—and that the stars involved are very dim before the explosions.

That is where the iPTF comes in. From atop Palomar Mountain in Southern California, where it is mounted on the 48-inch Samuel Oschin Telescope, the project's fully automated camera optically surveys roughly 1000 square degrees of sky per night (approximately 1/20th of the visible sky above the horizon), looking for transients—objects, including Type Ia supernovae, whose brightness changes over timescales that range from hours to days.

On May 3, the iPTF took images of IC831 and transmitted the data for analysis to computers at the National Energy Research Scientific Computing Center, where a machine-learning algorithm analyzed the images and prioritized real celestial objects over digital artifacts. Because this first-pass analysis occurred when it was nighttime in the United States but daytime in Europe, the iPTF's European and Israeli collaborators were the first to sift through the prioritized objects, looking for intriguing signals. After they spotted the possible supernova—a signal that had not been visible in the images taken just the night before—the European and Israeli team alerted their U.S. counterparts, including Caltech graduate student and iPTF team member Yi Cao.

Cao and his colleagues then mobilized both ground- and space-based telescopes, including NASA's Swift satellite, which observes ultraviolet (UV) light, to take a closer look at the young supernova.

"My colleagues and I spent many sleepless nights on designing our system to search for luminous ultraviolet emission from baby Type Ia supernovae," says Cao. "As you can imagine, I was fired up when I first saw a bright spot at the location of this supernova in the ultraviolet image. I knew this was likely what we had been hoping for."

UV radiation has higher energy than visible light, so it is particularly suited to observing very hot objects like supernovae (although such observations are possible only from space, because Earth's atmosphere and ozone later absorbs almost all of this incoming UV). Swift measured a pulse of UV radiation that declined initially but then rose as the supernova brightened. Because such a pulse is short-lived, it can be missed by surveys that scan the sky less frequently than does the iPTF.

This observed ultraviolet pulse is consistent with a formation scenario in which the material ejected from a supernova explosion slams into a companion star, generating a shock wave that ignites the surrounding material. In other words, the data are in agreement with the single-degenerate model.

Back in 2010, Daniel Kasen, an associate professor of astronomy and physics at UC Berkeley and Lawrence Berkeley National Laboratory, used theoretical calculations and supercomputer simulations to predict just such a pulse from supernova-companion collisions. "After I made that prediction, a lot of people tried to look for that signature," Kasen says. "This is the first time that anyone has seen it. It opens up an entirely new way to study the origins of exploding stars."

According to Kulkarni, the discovery "provides direct evidence for the existence of a companion star in a Type Ia supernova, and demonstrates that at least some Type Ia supernovae originate from the single-degenerate channel."

Although the data from supernova iPTF14atg support it being made by a single-degenerate system, other Type Ia supernovae may result from double-degenerate systems. In fact, observations in 2011 of SN2011fe, another Type Ia supernova discovered in the nearby galaxy Messier 101 by PTF (the precursor to the iPTF), appeared to rule out the single-degenerate model for that particular supernova. And that means that both theories actually may be valid, says Caltech professor of theoretical astrophysics Sterl Phinney, who was not involved in the research. "The news is that it seems that both sets of theoretical models are right, and there are two very different kinds of Type Ia supernovae."

"Both rapid discovery of supernovae in their infancy by iPTF, and rapid follow-up by the Swift satellite, were essential to unveil the companion to this exploding white dwarf. Now we have to do this again and again to determine the fractions of Type Ia supernovae akin to different origin theories," says iPTF team member Mansi Kasliwal, who will join the Caltech astronomy faculty as an assistant professor in September 2015.

The iPTF project is a scientific collaboration between Caltech; Los Alamos National Laboratory; the University of Wisconsin–Milwaukee; the Oskar Klein Centre in Sweden; the Weizmann Institute of Science in Israel; the TANGO Program of the University System of Taiwan; and the Kavli Institute for the Physics and Mathematics of the Universe in Japan. The Caltech team is funded in part by the National Science Foundation. 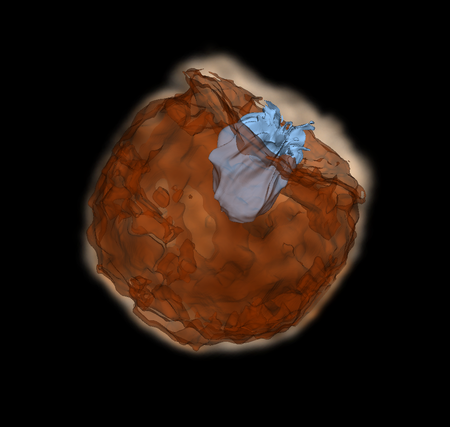 In this still from a simulation, a Type Ia supernova explodes (dark brown color). The supernova material is ejected outwards at a velocity of about 10,000 km/s. The ejected material then slams into its companion star (light blue color). The violent collision produces an ultraviolet pulse that is emitted from the conical hole carved out by the companion star. Credit: Courtesy of Daniel Kasen
Image Lightbox 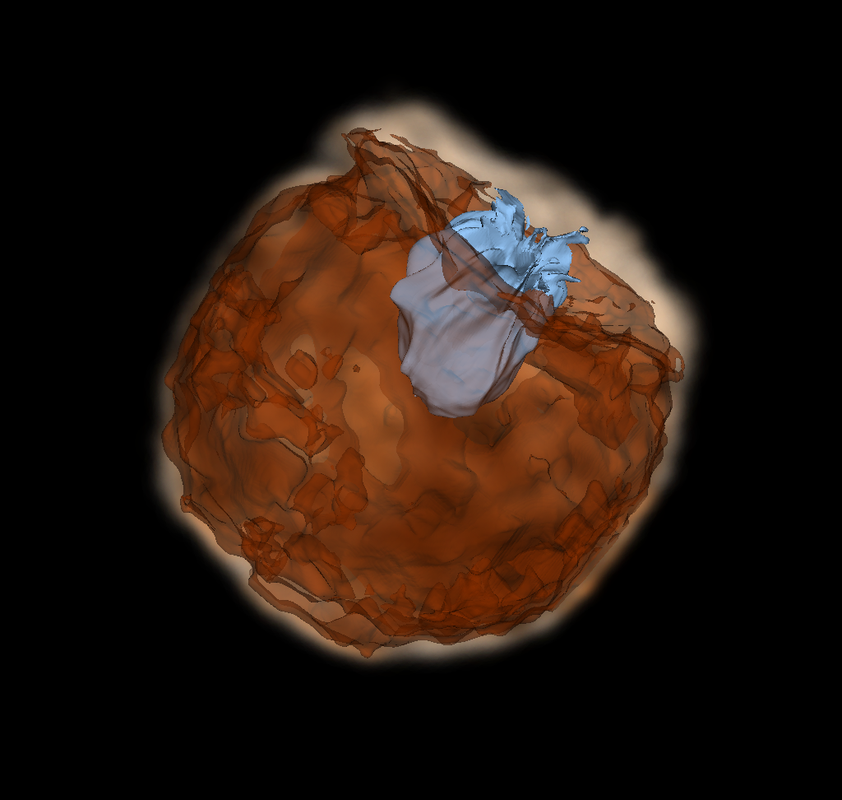 In this still from a simulation, a Type Ia supernova explodes (dark brown color). The supernova material is ejected outwards at a velocity of about 10,000 km/s. The ejected material then slams into its companion star (light blue color). The violent collision produces an ultraviolet pulse that is emitted from the conical hole carved out by the companion star.
Credit: Courtesy of Daniel Kasen
Download Full Image
Subscribe
The Caltech Weekly