Pasadena, Calif.—As the U.S. Secretary of Energy and hundreds of graduates and their families looked on, California Institute of Technology (Caltech) president Jean-Lou Chameau began today's commencement ceremony by announcing $30 million in gifts as the first phase of a proposed $90 million initiative for a new institute.

The funds will go towards the creation of the Resnick Sustainability Institute at Caltech. The initial gift of $20 million was made by Stewart and Lynda Resnick, and an additional $10 million came from the Gordon and Betty Moore Matching Program. The plans include a second phase of funding to be initiated next year as part of a challenge grant. Ultimately, the endowment for the new institute will exceed $90 million.

The vision of the Resnick Sustainability Institute is to provide a path to sustainability by focusing on innovative science and engineering developments required for groundbreaking energy technologies. Such technologies may one day help solve our global energy and climate challenges. With the support of the Resnick Sustainability Institute, some of the brightest minds in the world will apply Caltech's unique approach to interdisciplinary research toward high-risk, high-return energy science and technology.

"I have enjoyed many conversations with Stewart and Lynda on exciting developments in science and technology and their potential for addressing many of our environmental and economic challenges," says Chameau. "This generous gift from the Resnicks reflects their extraordinary desire and courage to make a difference. With their support, we are poised to launch an initiative at Caltech that will herald a new era in energy research."

"We are passionately committed to finding alternative and sustainable energy solutions," say Stewart and Lynda Resnick. "We're making this investment because Caltech is truly one of America's greatest research universities, and we are confident that this new institute will develop the breakthrough technologies we need to address the daunting challenges of energy security, rapidly accelerating energy demand, and climate change."

The new institute will leverage prior grants from the Gordon and Betty Moore Foundation and work being done by Caltech researchers such as Harry Atwater, the Howard Hughes Professor and professor of applied physics and materials science, who leads Caltech's Energy Frontier Research Center, recently funded by the Department of Energy; and Harry Gray, the Arnold O. Beckman Professor of Chemistry, and Nate Lewis, the George L. Argyros Professor and professor of chemistry, who lead Caltech's Center for Chemical Innovation, funded by the National Science Foundation.

The Resnicks' existing relationship with Caltech includes Stewart Resnick's role as a member of the Board of Trustees. He is also chairman and, with his wife, Lynda, owner of Roll International Corporation, a private holding company he founded in 1962. The company has diverse interests including Paramount Citrus, Paramount Farming, and Paramount Farms, growers and processors of citrus, almonds, and pistachios; POM Wonderful, the largest grower of pomegranates and makers of POM Wonderful pomegranate juice; Teleflora, the floral-by-wire service; FIJI Water, a leading premium bottled-water brand; and Suterra, one of the largest biorational pest control providers in the world.

The Resnicks have a long history of giving to Los Angeles institutions, including a 2008 pledge of $55 million to the Los Angeles County Museum of Art.

The announcement of the gift was made during Chameau's opening remarks at Caltech's 115th annual commencement ceremony. This year's keynote speaker, Department of Energy Secretary Steven Chu, remarked that the timing of the gift announcement was especially appropriate, as it involved energy science and sustainability, two of his programmatic efforts at the energy department.

Stewart Resnick is chairman and Lynda Resnick is vice chairman of Roll International Corporation, a privately held Los Angeles-based holding company. Among their holdings are Paramount Citrus, Paramount Farming, and Paramount Farms, growers and processors of citrus, almonds, and pistachios; POM Wonderful, the largest grower of pomegranates and makers of the all-natural POM Wonderful pomegranate juice; Teleflora, the floral-by-wire service; FIJI Water, a leading premium bottled-water brand; and Suterra, one of the largest biorational pest control providers in the world.

Lynda Resnick is vice chairman of the Los Angeles County Museum of Art's board of trustees, as well as the chair of the museum's acquisitions committee and executive committees. She is on the executive board of the Aspen Institute; the executive board for the UCLA Medical Sciences; Prostate Cancer Foundation; and the Milken Family Foundation. She is also a trustee of the Philadelphia Museum of Art. Lynda is also the best-selling author of the recently published book Rubies in the Orchards: How to Uncover the Hidden Gems in Your Business.

About Gordon and Betty Moore:

Gordon and Betty Moore are the cofounders and directors of the Gordon and Betty Moore Foundation. They have been contributing to science, technology, education, and conservation projects for decades. A California native, Moore earned a PhD in chemistry from Caltech in 1954. In 1968 he cofounded Intel, and became president and CEO in 1975. He was elected chairman and CEO in 1979. In 1987, he relinquished the CEO title, he was named chairman emeritus in 1997. Moore is also a member of the National Academy of Engineering and an IEEE Fellow. He received the National Medal of Technology in 1990 and was named a Caltech Distinguished Alumni in 1975. Moore served as chairman of the Caltech Board of Trustees from 1995 until the beginning of 2001 and continues as a senior trustee. In 2001, the Moores announced two gifts to Caltech totaling $600 million--the largest donation in history to an institution of higher education.

Caltech is recognized for its highly select student body of 900 undergraduates and 1,200 graduate students, and for its outstanding faculty. Since 1923, Caltech faculty and alumni have garnered 32 Nobel Prizes and five Crafoord Prizes. 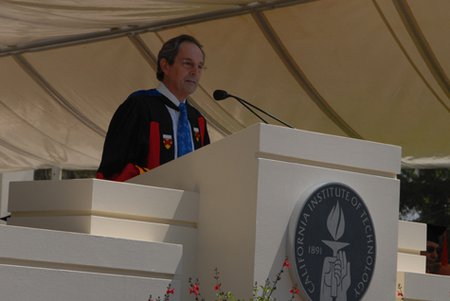 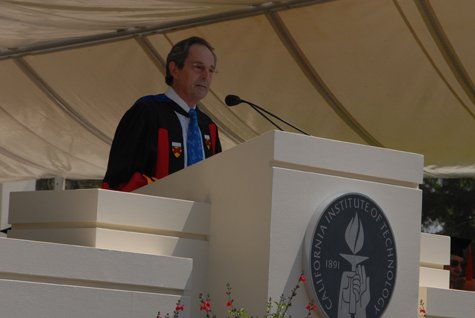