When the transistor was invented in 1947 at Bell Labs, few could have foreseen the future impact of the device. This fundamental development in science and engineering was critical to the invention of handheld radios, led to modern computing, and enabled technologies such as the smartphone. This is one of the values of basic research.

In a similar fashion, a branch of fundamental physics research, the study of so-called correlated electrons, focuses on interactions between the electrons in metals.

The key to understanding these interactions and the unique properties they produce—information that could lead to the development of novel materials and technologies—is to experimentally verify their presence and physically probe the interactions at microscopic scales. To this end, Caltech's Thomas F. Rosenbaum and colleagues at the University of Chicago and the Argonne National Laboratory recently used a synchrotron X-ray source to investigate the existence of instabilities in the arrangement of the electrons in metals as a function of both temperature and pressure, and to pinpoint, for the first time, how those instabilities arise. Rosenbaum, professor of physics and holder of the Sonja and William Davidow Presidential Chair, is the corresponding author on the paper that was published on July 27, 2015, in the journal Nature Physics.

Within atoms, electrons are organized into orbital shells and subshells. Although they are often depicted as physical entities, orbitals actually represent probability distributions—regions of space where electrons have a certain likelihood of being found in a particular element at a particular energy. The characteristic electron configuration of a given element explains that element's peculiar properties.

The work in correlated electrons looks at a subset of electrons. Metals, as an example, have an unfilled outermost orbital and electrons are free to move from atom to atom. Thus, metals are good electrical conductors. When metal atoms are tightly packed into lattices (or crystals) these electrons mingle together into a "sea" of electrons. The metallic element mercury is liquid at room temperature, in part due to its electron configuration, and shows very little resistance to electric current due to its electron configuration. At 4 degrees above absolute zero (just barely above -460 degrees Fahrenheit), mercury's electron arrangement and other properties create communal electrons that show no resistance to electric current, a state known as superconductivity.

Mercury's superconductivity and similar phenomena are due to the existence of many pairs of correlated electrons. In superconducting states, correlated electrons pair to form an elastic, collective state through an excitation in the crystal lattice known as a phonon (specifically, a periodic, collective excitation of the atoms). The electrons are then able to move cooperatively in the elastic state through a material without energy loss.

Electrons in crystals can interact in many ways with the periodic structure of the underlying atoms. Sometimes the electrons modulate themselves periodically in space. The question then arises as to whether this "charge order" derives from the interactions of the electrons with the atoms, a theory first proposed more than 60 years ago, or solely from interactions among the sea of electrons themselves. This question was the focus of the Nature Physics study. Electrons also behave as microscopic magnets and can demonstrate "spin order," which raises similar questions about the origin of the local magnetism.

To see where the charge order arises, the researchers turned to the Advanced Photon Source at Argonne. The Photon Source is a synchrotron (a relative of the cyclotron, commonly known as an "atom-smasher"). These machines generate intense X-ray beams that can be used for X-ray diffraction studies. In X-ray diffraction, the patterns of scattered X-rays are used to provide information about repeating structures with wavelengths at the atomic scale.

In the experiment, the researchers used the X-ray beams to investigate charge-order effects in two metals, chromium and niobium diselenide, at pressures ranging from 0 (a vacuum) to 100 kilobar (100,000 times normal atmospheric pressure) and at temperatures ranging from 3 to 300 K (or -454 to 80 degrees Fahrenheit). Niobium diselenide was selected because it has a high degree of charge order, while chromium, in contrast, has a high degree of spin order.

The researchers found that there is a simple correlation between pressure and how the communal electrons organize themselves within the crystal. Materials with completely different types of crystal structures all behave similarly. "These sorts of charge- and spin-order phenomena have been known for a long time, but their underlying mechanisms have not been understood until now," says Rosenbaum.

Paper coauthors Jasper van Wezel, formerly of Argonne National Laboratory and presently of the Institute for Theoretical Physics at the University of Amsterdam, and Peter Littlewood, a professor at the University of Chicago and the director of Argonne National Laboratory, helped to provide a new theoretical perspective to explain the experimental results.

Rosenbaum and colleagues point out that there are no immediate practical applications of the results. However, Rosenbaum notes, "This work should have applicability to new materials as well as to the kind of interactions that are useful to create magnetic states that are often the antecedents of superconductors," says Rosenbaum.

"The attraction of this sort of research is to ask fundamental questions that are ubiquitous in nature," says Rosenbaum. "I think it is very much a Caltech tradition to try to develop new tools that can interrogate materials in ways that illuminate the fundamental aspects of the problem." He adds, "There is real power in being able to have general microscopic insights to develop the most powerful breakthroughs." 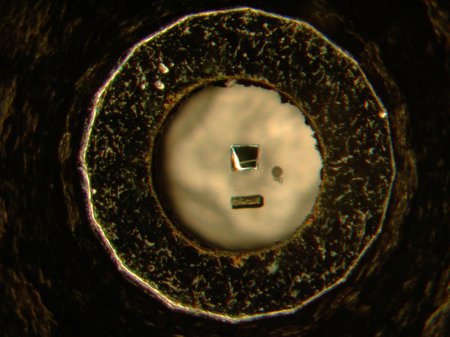 One of the metallic samples studied, niobium diselenide, is seen here–the square in the center–as prepared for an X-ray diffraction experiment. Credit: University of Chicago/Argonne National Laboratory 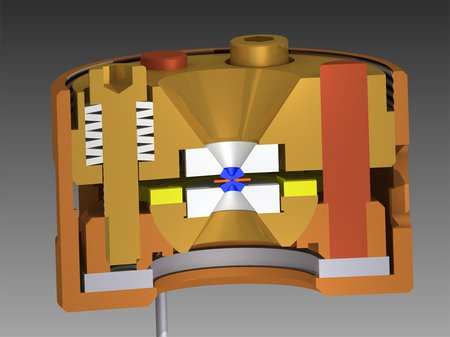 This cutaway schematic shows the diamond anvil cell, a pressure vessel in which the experiments were conducted. The target material is situated between two diamonds, represented here in blue. For this study, a diamond anvil generated pressures to 100,000 times sea level. Credit: University of Chicago/Argonne National Laboratory
Image Gallery Lightbox 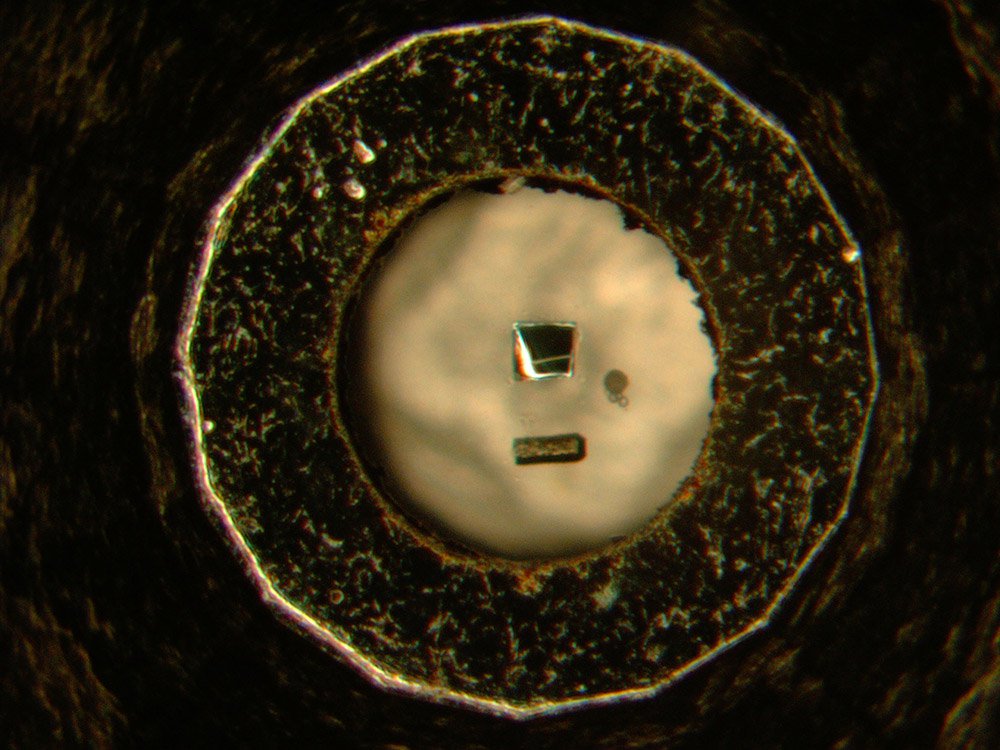 One of the metallic samples studied, niobium diselenide, is seen here–the square in the center–as prepared for an X-ray diffraction experiment.
Credit: University of Chicago/Argonne National Laboratory
Download Full Image 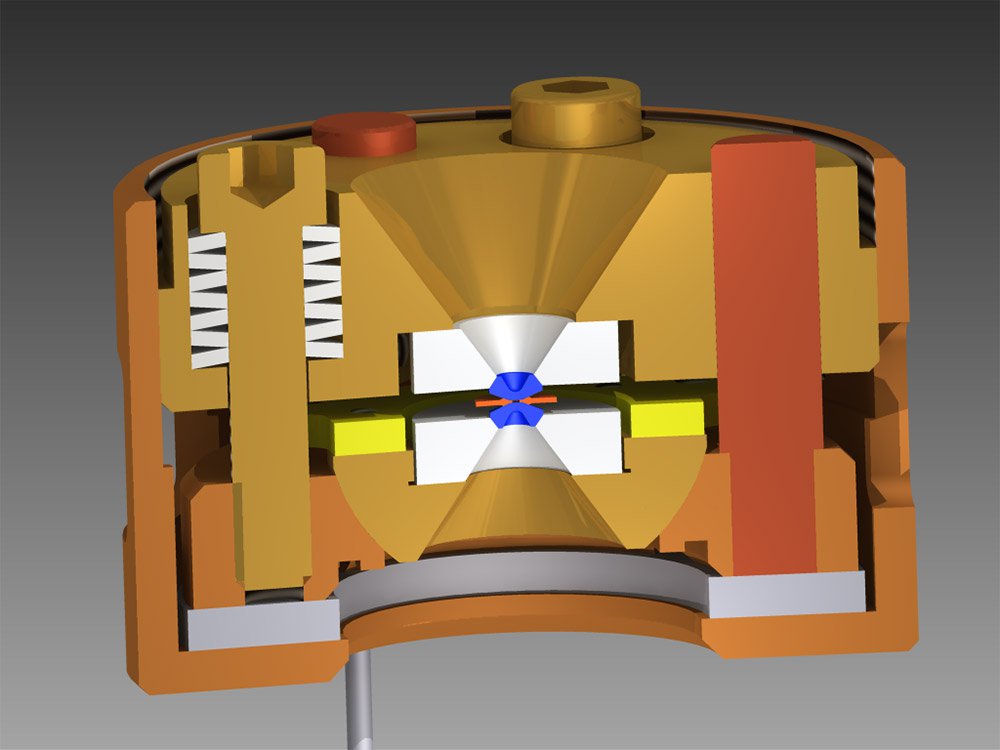 This cutaway schematic shows the diamond anvil cell, a pressure vessel in which the experiments were conducted. The target material is situated between two diamonds, represented here in blue. For this study, a diamond anvil generated pressures to 100,000 times sea level.
Credit: University of Chicago/Argonne National Laboratory
Download Full Image