Pasadena, Calif.--Scientists at the California Institute of Technology (Caltech) and IBM's Almaden Research Center have developed a new technique to orient and position self-assembled DNA shapes and patterns--or "DNA origami"--on surfaces that are compatible with today's semiconductor manufacturing equipment. These precisely positioned DNA nanostructures, each no more than one one-thousandth the width of a human hair, can serve as scaffolds or miniature circuit boards for the precise assembly of computer-chip components.

The advance, described in the current issue of the journal Nature Nanotechnology, could allow the semiconductor industry to pack more power and speed into tiny computer chips, while making them more energy efficient and less expensive to manufacture than is possible today.

DNA origami structures have been heralded as a potential breakthrough for the creation of nanoscale circuits and devices. In a process created by Caltech senior research associate Paul W. K. Rothemund and his colleagues, DNA molecules self-assemble in solution via a reaction between a long single strand of viral DNA and a mixture of different short synthetic DNA strands. These short segments act as staples that effectively fold the viral DNA into desired two-dimensional shapes through complementary base-pair binding.

In this way, DNA nanostructures such as squares, triangles, and stars can be prepared that measure 100 to 150 nanometers on an edge and are as thick as the DNA double helix is wide.

One roadblock to the use of DNA origami, however, is that the structures are made in saltwater solution--whereas electronic circuits are created on surfaces, like a silicon wafer, so they can be integrated with other technologies.

DNA origami structures also adhere randomly to surfaces, which means that "if you just pour DNA origami over a surface to which they stick, they attach everywhere," explains Rothemund, who jointly led the project with IBM. "It's a little like taking a deck of playing cards and throwing it on the floor; they are scattered willy-nilly all over the place. Such random arrangements of DNA origami are not very useful. If they carry electronic circuits, for example, they are difficult to find and wire up into larger circuits."

To eliminate these problems, Rothemund and his colleagues at the Almaden Research Center developed a way to precisely position DNA origami nanostructures on a surface, "to line them up like little ducks in a row," Rothemund says. "This knocks down one of the major roadblocks for the use of DNA origami in technology," he adds.

In a process developed by IBM scientists, electron-beam lithography and oxygen plasma etching, conventional semiconductor techniques, are used to make patterns on silicon wafers, creating lithographic templates of the proper size and shape to match those of individual triangular DNA origami structures created by Rothemund. The etched patches are negatively charged, as are DNA origami structures, and are therefore "sticky."

The positioned DNA nanostructures can then serve as scaffolds or miniature circuit boards for the precise assembly of components such as carbon nanotubes, nanowires, and nanoparticles at dimensions significantly smaller than possible with conventional semiconductor fabrication techniques. This opens up the possibility of creating functional devices that can be integrated into larger structures as well as enabling studies of arrays of nanostructures with known coordinates.

"The spacing between the components can be 6 nanometers, so the resolution of the process is roughly 10 times higher than the process we currently use to make computer chips," Rothemund says. "Then, if you want to design a really small electronic device, say, you just design DNA strands to create the pattern you want, attach little chemical 'fastening posts' to those DNA strands, assemble the pattern, and then assemble the components onto the pattern," he explains.

The process isn't limited to organizing things that are of interest to physical scientists and engineers, like electronic components, Rothemund adds. For example, he says, "Biologists studying how proteins interact can place them in patterns on top of DNA origami. This may be useful in the case of motor proteins, the little machines that power our muscles. They work in gangs, with multiple motors pulling together. To study how different configurations of motors cooperate, scientists may use DNA origami to organize the gangs."

"Rothemund and his colleagues have removed a key barrier to the improvement and advancement of computer chips. They accomplished this through the revolutionary approach of combining the building blocks for life with the building blocks for computing," says Ares Rosakis, Theodore von Kármán Professor of Aeronautics and Mechanical Engineering and chair of Caltech's Division of Engineering and Applied Science.

The paper, "Placement and orientation of individual DNA shapes on lithographically patterned surfaces," was published in the August 16 issue of Nature Nanotechnology. The work was supported by the National Science Foundation and the Focus Center Research Program. 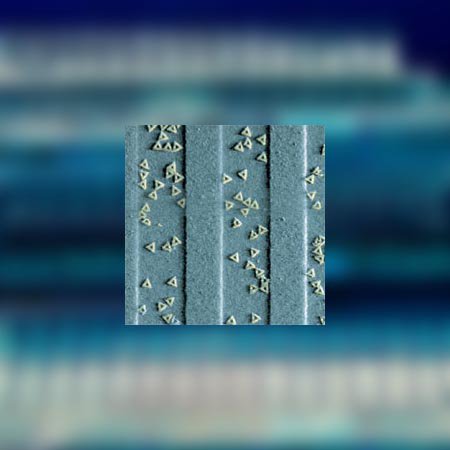