Caltech alumnus Evan Sloan (BS '17), who earned his bachelor's degree in mechanical engineering, has been chosen to attend the Infiniti Engineering Academy.

Infiniti, a luxury division of the Japanese automaker Nissan, has formed a technical partnership with Renault Sport F1, one of 10 teams that currently participate in Formula One racing. Formula One, for the uninitiated, is the highest class of single-seat auto racing in the world, featuring technologically advanced, open-wheel cars that reach speeds well in excess of 200 miles per hour.

Starting in October, Sloan will spend six months at Infiniti's European Technical Center and six months with the Renault Sport Formula One Team. He and his cohort will go through a training and mentoring program with engineers from both companies.

Infiniti's internship program accepts just seven applicants per year from around the globe, each from a different geographical region: Asia/Oceania, Canada, Mexico, China, the Middle East, Europe/Russia, and the United States. This year—the fourth for the program—some 12,020 young engineers applied.

Though Sloan knows he will be getting hands-on experience in actual Formula One engineering—one of the rear wings of this year's Renault car was developed by an Infiniti Engineering Academy intern—he does not yet know exactly what tasks he will be asked to perform over the next year. But he is ready.

"I think Caltech prepared me for the unknown. Caltech teaches you how to overcome unforeseen, incredibly difficult challenges," Sloan says.

Breaking into the competitive world of Formula One has been a lifelong goal for the 21-year-old from Uxbridge, Massachusetts. To prepare, he helped co-found Caltech's Formula SAE Electric team in fall 2014.

"Evan was always excited about race cars," says Guillaume Blanquart, professor of mechanical engineering at Caltech and faculty advisor for the team. "As a sophomore, he converted a gas-powered go kart into an electric vehicle. Four months later, he was the mechanical lead on a 60-person team in charge of designing a Formula One-style race car from scratch. The team would never have reached the Formula SAE competition without Evan's drive, dedication, and perseverance."

Created by SAE International, Formula SAE is a three-day series of races and trials for cars built by university teams from around the country. There are no kits, no detailed plans provided—and no faculty members doing the organizing, fundraising, and fabrication. From teambuilding to design to manufacture, students run everything, providing them with real-world experiences to complement their engineering educations.

Industry leaders are known for using Formula SAE as a recruiting ground for new talent—and indeed, while prepping Caltech's car, Sloan received an email (sent to all Formula SAE participants) from Infiniti, inviting him to apply for the Infiniti Engineering Academy. He did so, like thousands of others, but heard nothing back and started making other plans—accepting an invitation to pursue a graduate education at England's Oxford Brookes University in the fall.

That all changed when he received word from Infiniti that he'd been selected as a semifinalist for the internship. By the first week of August, the field had been further winnowed down, with Sloan and nine other hopefuls flying to Seattle for a two-day competition to fill just one slot.

"I was competing with nine other guys who were at least as driven as I was," Sloan recalls. Even so, he was happy to find himself surrounded by peers who shared his passion for racing. "I'm used to being the guy in the room who knows more about Formula One than anyone else. Not this time."

The competition split the 10 engineers into teams and, among other things, had them design and build a drag-racing electric radio-controlled car, create an app that analyzed actual data from last year's Formula One season, take a physics test with just a pencil and paper, and conduct practice TV interviews with local reporters.

Winning the various challenges was not the deciding factor—in fact, Sloan's team lost most of them. The real goal was to see how the competitors worked under pressure, and how they functioned in a group, Sloan says.

"It was all about throwing us out of our comfort zone. But I'm used to that. Caltech is really good at getting you to perform at a high level outside of your comfort zone," he says.

In the end, Sloan was shocked and thrilled to be chosen, and he says he is excited to begin an internship that will be a springboard to a career in Formula One engineering; Oxford Brookes University has deferred his start date by a year.

Next month, Sloan will relocate to the United Kingdom—living by turns in Enstone, near Oxford, for the Renault Formula One half of his internship and in Cranfield, for the Infiniti Technical Center half. In addition to paying a salary, the placement includes travel to and from the UK, living accommodations, and a shared Infiniti executive vehicle. 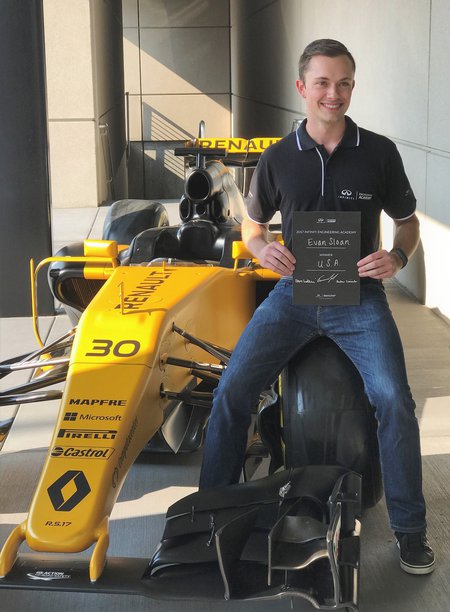 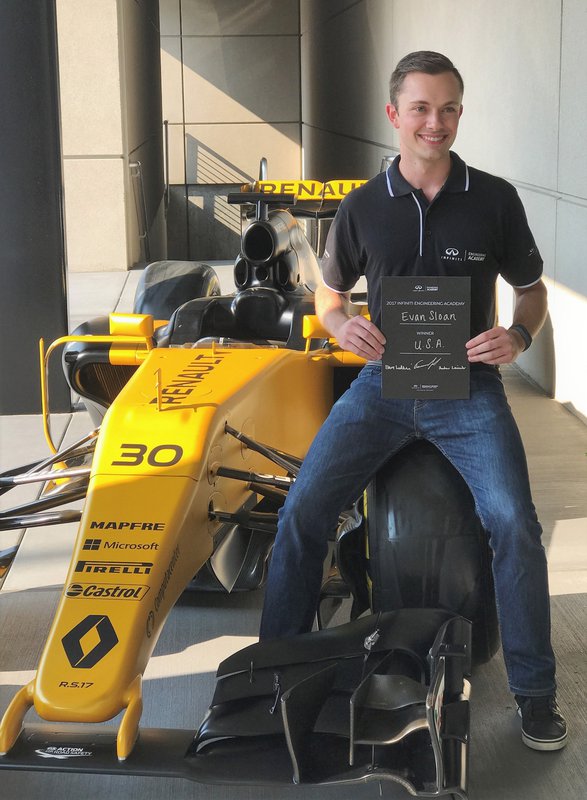