Caltech Alumnus Embeds with the California Office of Emergency Services

Caltech alumnus Alistair Hayden (PhD '20) has been named a Science Fellow by the California Council on Science and Technology for the program's 2021 class.

The 12-year-old program places PhD scientists and engineers directly into legislative offices and committees, and executive-branch agencies where they can have a direct impact on policy; Hayden now works at the California Office of Emergency Services (Cal OES).

At Caltech, Hayden worked with Mike Lamb, professor of geology, studying the history of rivers on Mars using terrestrial rivers as an analogue. That research gives him insight into the mechanics of debris flows, such as the kind that occur when a heavy rain hits wildfire-denuded slopes. This insight will be invaluable as he participates in Cal OES efforts looking at the human side of wildfire response and recovery: specifically, how to help communities impacted by wildfires recover and become less likely to burn in the future.

"This is an unprecedented time at Cal OES. This has been a year of major wildfires and debris flows amid the pandemic response," Hayden says. "What I'm hoping to bring as a geologist is the technical background on flooding and debris flows, as well as general geospatial and analytical skills."

At Caltech, Hayden worked with fellow graduate student Nathan Stein (PhD '20) on pioneering drone surveys of Little Ambergris cay in the Caribbean, an experience that led him to recognize the possibility of using a network of rapid-response drones to scout and monitor wildfires that break out in especially remote areas. "One of the issues with the Camp Fire was that it started in a remote area that was hard to get to, and the wind was too high for fire helicopters to fly, so the fire had a chance to grow before the threat was fully assessed," he says. "One possibility would be to station the survey drones around the state, offering rapid-response fire surveys that require little human intervention." 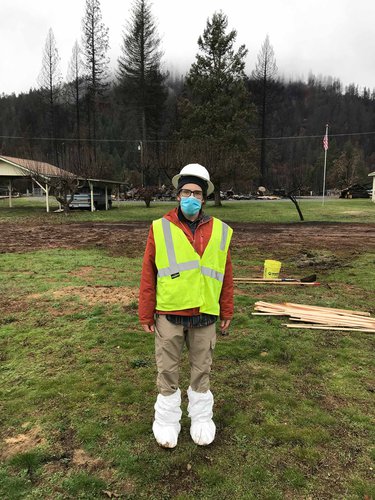 Alistair Hayden at Happy Camp, a small town near Oregon, where he worked with debris removal crews. Behind him is a dirt patch where a burnt building once stood. Hayden wears hazmat style boot coverings because the soil is potentially contaminated with heavy metals and other toxic materials from the building. Credit: Courtesy of Alistair Hayden
Image Lightbox 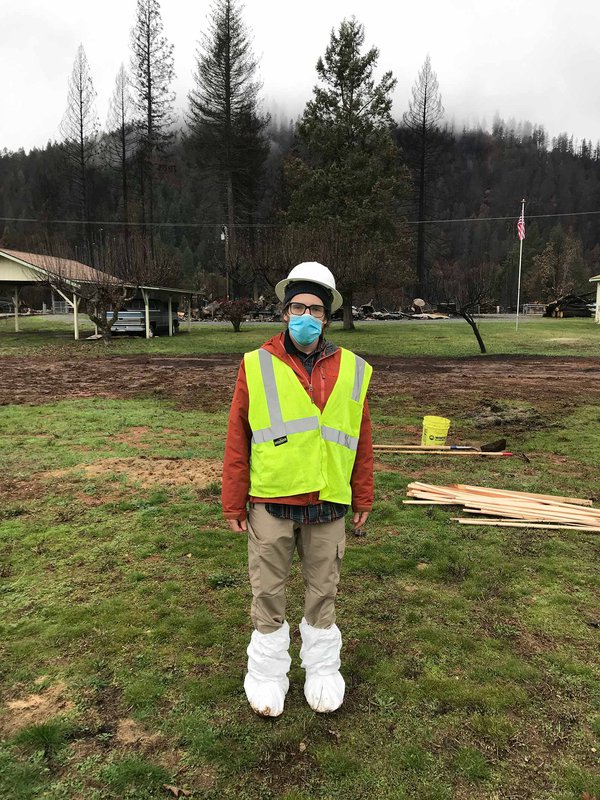 Alistair Hayden at Happy Camp, a small town near Oregon, where he worked with debris removal crews. Behind him is a dirt patch where a burnt building once stood. Hayden wears hazmat style boot coverings because the soil is potentially contaminated with heavy metals and other toxic materials from the building.
Credit: Courtesy of Alistair Hayden
Download Full Image

Beyond his scientific contributions, Hayden also hopes to address issues of inequality through disaster recovery. "Disaster recovery raises issues of equity and housing. In the aftermath of major disasters, inequality is often exacerbated as communities and individuals of color, and those living in poverty, are often more vulnerable and hit harder, with fewer resources to recover," he says. "I want to look at how we can build housing after a disaster in a way that tries to reduce some of the housing inequities that exist across California."

"More than any student I have worked with before, Dr. Hayden valued science communication and outreach at least as much as the science itself," Lamb says. "I am excited for him to be in a position to bring cutting-edge science on flood and debris-flow hazards directly to decision makers. There are new technologies, like airborne laser topographic mapping, that can reveal where post-wildfire debris flows will occur months before they happen. These tools are currently rarely used outside of the academic community, and Alistair is in a unique position to advocate for new practices at local and state levels that can save lives."

Hayden is currently living in the Bay Area, although his work with Cal OES has led him to disaster sites from Paradise, California, to the Oregon border, learning how communities have been affected by wildfire. He has spent part of his time embedded with a soil-sampling team screening soil samples for toxins released from objects like batteries and electronics scorched in wildfires.

In addition, Hayden is working on a task force tackling the COVID-19 response. "I'm the data guy," he says, adding that he helps Cal OES to interface with industry partners such as Google to gather data to make better decisions about the purchase and distribution of personal protective equipment.

Hayden is also connecting Cal OES with other fellow scientists in an effort to be a scientific force multiplier by finding experts to weigh in on whatever is needed. "Cal OES already has a good connection with industry, but I'm trying to push more collaboration with universities," he says.

His interest in emergency response extends beyond his academic training. He participated in a Caltech-hosted Community Emergency Response Team (CERT) course and a Caltech-funded wilderness first aid course. During the early months of the COVID-19 pandemic, he also helped to establish an online newsletter to connect needs and resources across the campus community and region. Hayden first heard about the CCST Fellowship while completing his master's degree at Boston University when a faculty member took a sabbatical for a year to participate in the program. Later, he heard a talk about the program on Caltech's campus by alumna Toni Lee (PhD '14), who was among the 2014 class of CCST science fellows. Both encouraged him to apply.

Hayden is now about a month into what will be a yearlong position at Cal OES. "This is a great opportunity to combine the skill set I developed at Caltech with my other skills and interests to make a difference in peoples' lives," he says.

He will be giving a talk on Zoom hosted by the Caltech Y about his experience so far on February 9.