PASADENA, Calif.-- More than a century ago, the development of the earliest motion picture technology made what had been previously thought "magical" a reality: capturing and recreating the movement and dynamism of the world around us. A breakthrough technology based on new concepts has now accomplished a similar feat, but on an atomic scale--by allowing, for the first time, the real-time, real-space visualization of fleeting changes in the structure and shape of matter barely a billionth of a meter in size.

Such "movies" of atomic changes in materials of gold and graphite, obtained using the technique, are featured in a paper appearing in the November 21 issue of the journal Science. (4D microscopy videos can be viewed at http://ust.caltech.edu/movie_gallery/.) A patent on the conceptual framework of this approach was granted to the California Institute of Technology (Caltech) in 2006.

The new technique, dubbed four-dimensional (4D) electron microscopy, was developed in the Physical Biology Center for Ultrafast Science and Technology, directed by Ahmed Zewail, the Linus Pauling Professor of Chemistry and professor of physics at Caltech, and winner of the 1999 Nobel Prize in Chemistry.

Zewail was awarded the Nobel Prize for pioneering the science of femtochemistry, the use of ultrashort laser flashes to observe fundamental chemical reactions--atoms uniting into molecules, then breaking apart back into atoms--occurring at the timescale of the femtosecond, or one millionth of a billionth of a second. The work "captured atoms and molecules in motion," Zewail says, akin to the freeze-frame stills snapped by 19th-century photographer Eadweard Muybridge of a galloping horse (which proved for the first time that a horse does indeed lift all four hooves off the ground as it gallops) and other moving objects.

Snapshots of molecules in motion "gave us the time dimension," Zewail says, "but what we didn't have was the dimensions of space, the structure. We didn't know what the horse looked like. Did it have a long tail? Beautiful eyes? My dream since 1999 was to come up with a way to look not just at time but also at the spatial domain; to see the architecture of a complex system at the atomic scale, as it changes over time, be it for physical or biological matter."

Scientists can observe the static structure of objects with a resolution that is better than a billionth of a meter in length using electron microscopes, which generate a stream of individual electrons that scatter off objects to produce an image. Electrons are used to visualize the smallest of objects, on the atomic scale, because the wavelength of the radiation source used by a microscope must be shorter than the space between the atoms. This can be accomplished using electrons, and in particular--because the wavelength of an electron shrinks as its velocity increases--by electrons that have been accelerated to dizzying speeds.

But just having electrons isn't sufficient to capture the behavior of atoms in both space and time; the electrons have to be carefully doled out, so that they arrive at the sample at specific time intervals. Zewail and his colleagues have achieved this by introducing the fourth dimension of time into high-resolution electron microscopy, in what has been termed ultrafast "single-electron" imaging, where every electron trajectory is precisely controlled in time and space.

The resulting image produced by each electron represents a femtosecond still at that moment in time. Like the frames in a film, the sequential images generated by many millions of such images can be assembled into a digital movie of motion at the atomic scale.

As reported in the Science paper, Zewail and colleagues applied their new 4D electron microscopy to observe the behavior of the atoms in superthin sheets of gold and graphite. Graphite, the material in pencils, consists of layers of carbon atoms locked into a sheet-like array. The atoms move in a unique and coherent way on the femtosecond timescale.

However, the researchers found that on a slightly longer, picosecond (one thousandth of a billionth of a second) scale, the graphite nanosheets produce sound waves. In the images, they directly visualized the elastic movements of the sheets and determined the force holding them together, which is described by a stress-strain property known as "Young's modulus." The 4D movies produced from the frames revealed the behavior in space and time.

In a second paper in the current issue of the journal Nano Letters, Zewail and his colleagues described their visualization of the changes in a nanometer-thick graphite membrane on a longer time scale, up to a thousandth of a second. The researchers first blasted the sample with a pulse of heat. The heated carbon atoms began to vibrate in a random, nonsynchronized fashion. Over time, however, the oscillations of the individual atoms became synchronized as different modes of the material locked in phase, emerging to become a heartbeat-like "drumming." Digital video, slowed down more than a billion times, illustrates this nano-drumming mechanical phenomenon, which displays a well-defined resonance that is nearly 100 times higher than can be detected by the human eardrum.

"With this 4D imaging technique, atomic-scale motions, which lead to structural, morphological, and nanomechanical phenomena, can now be visualized directly, and hopefully understood," says Zewail, who is now expanding the research to biological imaging within cells in collaboration with Grant Jensen, an associate professor of biology at Caltech.

The researchers are currently using the 4D microscope to image the components of cells, such as proteins and ribosomes, the cellular machinery that makes proteins. They have already produced images of a stained rat cell and, more recently, of a protein crystal and cell in vitreous water. "The goal is to enhance the structural resolution in the images of these biomaterials by taking single-pulse snapshots before they move or deteriorate, and to follow their dynamics in real time," Zewail says.

In a recent commentary on the development, Sir John Thomas of Cambridge University, who is a world-renowned expert in electron microscopy, said the invention and its applications are "revolutionary." "The door is now open for myriad explorations in the physical and biological sciences," Thomas added.

"The sequences of images produced by this technique are remarkable," says David Tirrell, chair of Caltech's Division of Chemistry and Chemical Engineering. "They not only provide unprecedented insights into molecular and materials behavior--they do so in an especially satisfying fashion by allowing direct observation of complex structural changes in real space and real time. These experiments will lead us to fundamentally new ways of thinking about molecules and materials."

"Advances in imaging, concepts, and technology for visualization are fundamental to progress in diverse scientific and engineering fields," says Edward M. Stolper, Caltech's provost. "Caltech has made a commitment to leadership across the many physical and biological disciplines in which imaging plays a critical role. Ahmed's pioneering work is trailblazing new frontiers of science and technology." 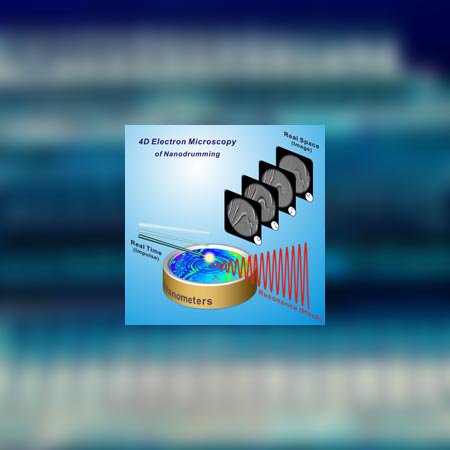