In March of this year, a team of bioengineers from Caltech, JPL, and the University of Washington spent a week in Greenland, using snowmobiles to haul their scientific equipment, waiting out windstorms, and spending hours working on the ice. Now the same researchers are planning a trip to California's Mojave Desert, where they will study Searles Lake, a dry, extremely salty basin that is naturally full of harsh chemicals like arsenic and boron. The researchers are testing a holographic microscope that they have designed and built for the purpose of observing microbes that thrive in such extreme environments. The ultimate goal? To send the microscope on a spacecraft to search for biosignatures—signs of life—on other worlds such as Mars or Saturn's icy moon Enceladus.

"Our big overarching hypothesis is that motility is a good biosignature," explains Jay Nadeau, a scientific researcher at Caltech and one of the investigators on the holographic microscope project, dubbed SHAMU (Submersible Holographic Astrobiology Microscope with Ultraresolution). "We suspect that if we send back videos of bacteria swimming, that is going to be a better proof of life than pretty much anything else."

Think, she says, of Antonie van Leeuwenhoek, the father of microbiology, who used simple microscopes in the 17th and 18th centuries to observe protozoa and bacteria. "He immediately recognized that they were living things based on the way they moved," Nadeau says. Indeed, when Leeuwenhoek wrote about observing samples of the plaque between his teeth, he described seeing "many very little animalcules, very prettily a-moving." And Nadeau adds, "No one doubted Leeuwenhoek once they saw them moving for themselves."

In order to capture images of microbes "a-moving" on another world, Nadeau and her colleagues, including Mory Gharib, the Hans W. Liepmann Professor of Aeronautics and Bioinspired Engineering and a vice provost at Caltech, had the idea to use digital holography rather than conventional microscopy.

Holography is a method for recording holistic information about the light bouncing off a sample so that a 3-D image can be reconstructed at some later time. Compared to microscopy, which often involves multiple lenses focusing over a shallow sample (on a slide, for example), holography offers the advantages of focusing over a relatively large volume and of capturing high-resolution images, without the trouble of moving parts that could break in extreme environments or during a launch or landing, if the instrument were sent into space.

Standard photography records only the intensity of the light (related to its amplitude) that reaches a camera lens after scattering off an object. But as a wave, light has both an amplitude and a phase, a separate property that can be used to tell how far the light travels once it is scattered. Holography is a technique that captures both—something that makes it possible to re-create a three-dimensional image of a sample.

To understand the technique, first imagine dropping a pebble in a pond and watching ripples emanate from that spot. Now imagine dropping a second pebble in a new spot, producing a second set of ripples. If the ripples interact with an object on the surface, such as a rock, the ripples are diffracted or scattered by the object, changing the pattern of the waves—an effect that can be detected. Holography is akin to dropping two pebbles in a pond simultaneously, with the pebbles being two laser beams—one a reference beam that shines unaffected by the sample, and an object beam that runs into the sample and gets diffracted or scattered. A detector measures the combination, or superposition, of the ripples from the two beams, which is known as the interference pattern. By knowing how the waves propagate and by analyzing the interference pattern, a computer can reconstruct what the object beam encountered as it traveled

"We can take an interference pattern and use that to reconstruct all of the images in different planes in a volume," explains Chris Lindensmith, a systems engineer at JPL and an investigator on the project. "So we can just go and reconstruct whatever plane we are interested in after the fact and look and see if there's anything in there."

That means that a single image captures all the microbes in a sample—whether there is one bacterium or a thousand. And by taking a series of such images over time, the researchers can reconstruct the path that each bacterium took as it swam in the sample.

That would be virtually impossible with conventional microscopy, says Lindensmith. With microscopy, you need to focus in real time, meaning that someone would have to turn a dial to move the sample closer or farther from the microscope's lenses in order to keep a particular microbe in focus. During that time, they would miss out on the movements of any other microbes in the sample because the focus is so small.

All of the advantages that the holographic microscope offers over microscopy make it appealing for studies elsewhere in the solar system. And there are a number of worlds that scientists are eager to study in close-up detail to search for signs of life. In 2008, using data from the Phoenix Mars lander, scientists determined that there is water ice just below the surface in the northern plains of the Red Planet, making the locale a candidate for follow-up sampling studies. In addition, both the jovian moon Europa and the saturnian moon Enceladus are thought to harbor liquid oceans beneath their icy surfaces. Therefore, the SHAMU group says, a compact, robust, microscope like the one the Caltech team is developing could be a highly desirable component of an instrument suite on a lander to any one of those locations.

Nadeau says the group's prototype performed well during the team's field-testing trip to Greenland. At each testing site, the researchers drilled a hole into the sea ice, submerged the microscope to a depth where some of the salty liquid water trapped inside the ice, called brine, was able to seep into the device's sample area, and collected holographic images. "We know that things live in the water and we know what they do and how they swim," says Nadeau. "But believe it or not, nobody knew what kinds of microorganisms live in sea-ice brine or if they can swim."

That is because typical techniques for counting, labeling, and observing microbes rely on fragile instrumentation and often require large amounts of power, making them unusable in extreme environments like the Arctic. As a result, "nobody had ever looked at sea-ice organisms immediately after collection like we did," says Stephanie Rider, a staff scientist at Caltech who went on the Greenland trip as part of the project. Previously, other teams have collected samples and taken them back to a lab where the samples have been stored in a freezer, sometimes for weeks at a time. "Who knows how much the samples have been warmed up and cooled down by the time someone studies them?" Rider says. "The samples could be totally different at that point."

When samples are returned to the laboratory, fed rich medium, and warmed to +4 degrees, swimming speeds are greatly increased.
Credit: Jay Nadeau/Caltech

During the Greenland trip, the SHAMU group successfully collected images that have been used to construct videos of bacteria and algae that live in the sea-ice brine. They also brought samples back to a lab in Nuuk, Greenland, warmed them overnight, and fed them bacterial growth medium—duplicating the standard conditions under which microorganisms from sea ice have been studied in the past. The researchers found that under those conditions, "everything starts zipping around like crazy," says Nadeau, indicating that in order to be accurate, observations do need to be made in place on the ice rather than back in a lab.

The team is particularly excited about what the successful measurements from Greenland could mean in the context of Mars. "We know from this that we can tell that things are alive when you take them straight out of ice," says Nadeau. "If we can see life in there on Earth, then it's possible there might be life in pockets of ice on Mars as well. Perhaps you don't have to have a big liquid ocean to find living organisms; there's a possibility that things can live just in pockets of ice."

The three-year SHAMU project began in January 2014 with funding from the Gordon and Betty Moore Foundation. In the coming months, the engineers hope to improve the microscope's sample chamber and to scale down the entire device. They believe they will have a launch-ready instrument by the end of the funding period.

As a first test in space, they would like to send the instrument to the International Space Station not only to see how it behaves in space but also to observe microbial samples under zero-gravity conditions. Beyond that, they hope to include SHAMU on a Mars lander as part of a NASA Discovery mission aimed at searching for biosignatures in the frozen northern plains of Mars. The Caltech team is partnering with Honeybee Robotics, a company that has built drills and sampling systems for numerous NASA missions (including the Phoenix Mars lander), to integrate the holographic microscope on a drill that would bore down about three feet into the martian ground ice.

In addition to Nadeau, Gharib, and Lindensmith, Jody Deming of the University of Washington's School of Oceanography is also an investigator on the SHAMU project. 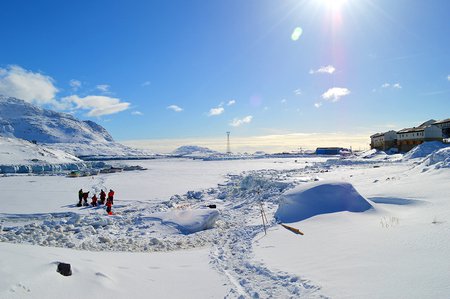 For the first deployment of the instrument in Greenland, the team investigated sea ice just behind the Nuuk Municipal Pool. It was a warm day for Greenland, so finding ice of sufficient depth was challenging that day. Credit: Kelsey Ammondson 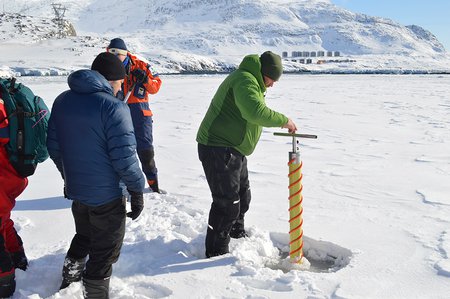 An ice augur is used to determine the thickness of the sea ice. If seawater pours into the hole, the ice is too thin. It should take 30-60 minutes for brine to collect. The augur also extracts ice cores which are returned to the laboratory for molecular biological analysis. Credit: Kelsey Ammondson 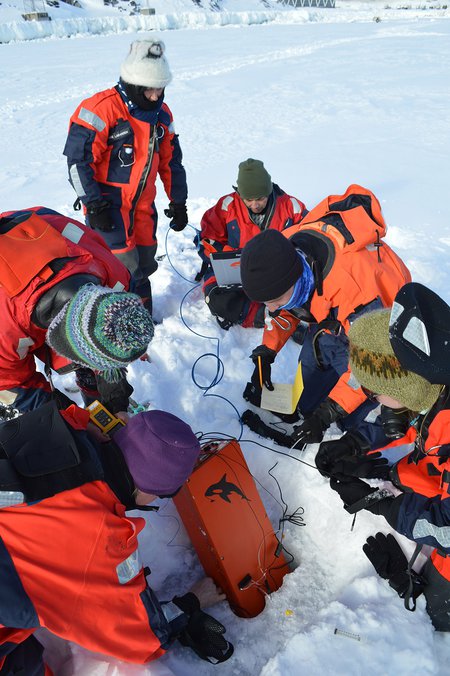 Deploying the microscope in a sea ice sackhole. Credit: Kelsey Ammondson Bacteria (prokaryotes) travel in a zig-zag fashion, whereas larger eukaryotes such as algae can be seen "sprinting" along the edges of the video. Credit: Jay Nadeau/Caltech A motile bacterium (small cell) travels in the wake of a larger eukaryote in this recording taken directly in sea ice brine. Credit: Jay Nadeau/Caltech
Image Gallery Lightbox 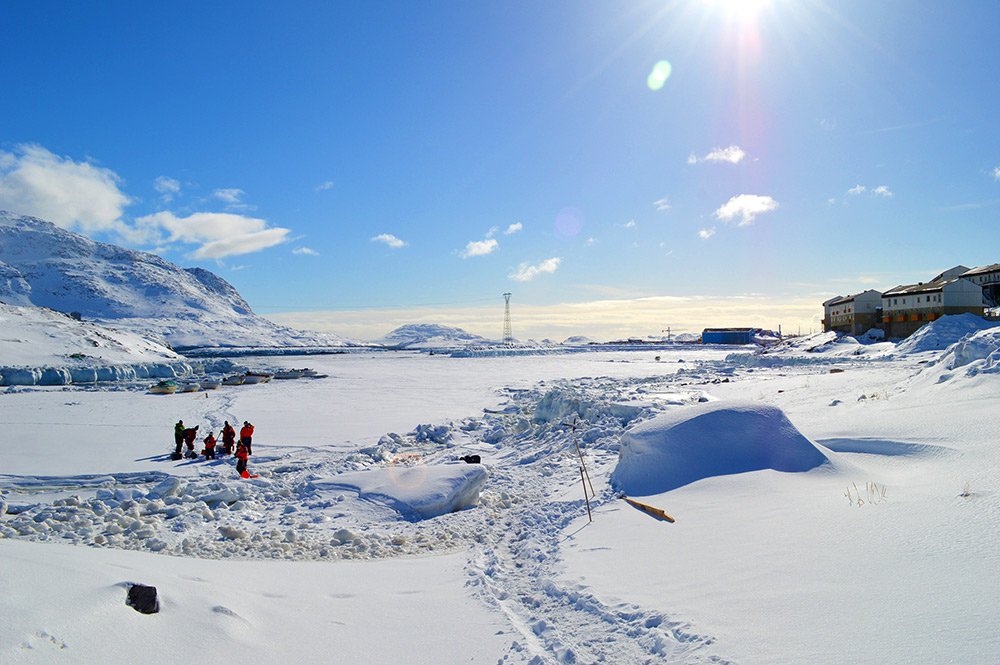 For the first deployment of the instrument in Greenland, the team investigated sea ice just behind the Nuuk Municipal Pool. It was a warm day for Greenland, so finding ice of sufficient depth was challenging that day.
Credit: Kelsey Ammondson
Download Full Image 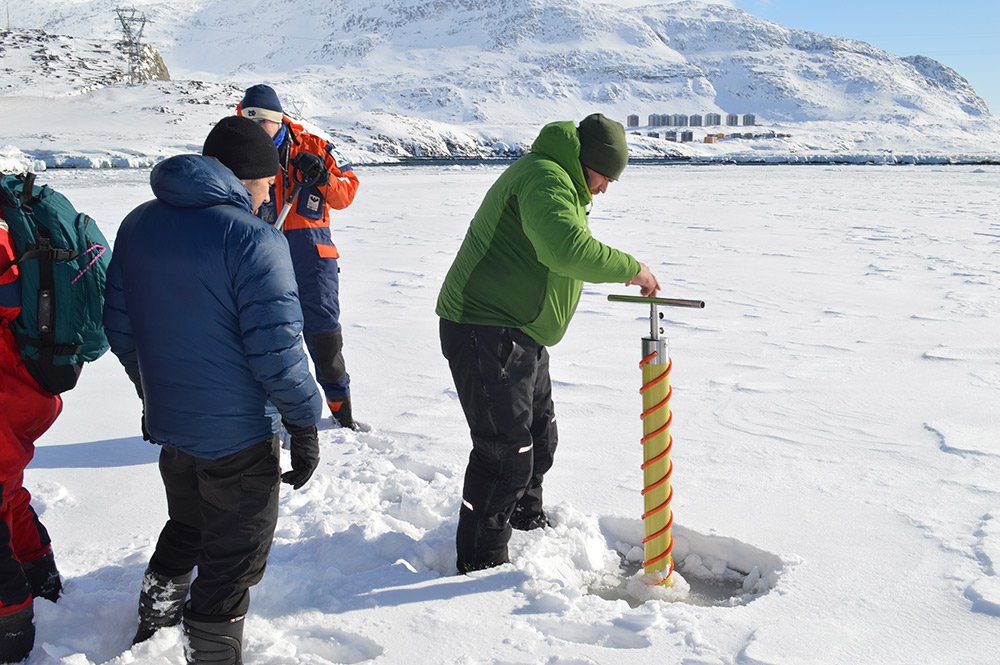 An ice augur is used to determine the thickness of the sea ice. If seawater pours into the hole, the ice is too thin. It should take 30-60 minutes for brine to collect. The augur also extracts ice cores which are returned to the laboratory for molecular biological analysis.
Credit: Kelsey Ammondson
Download Full Image 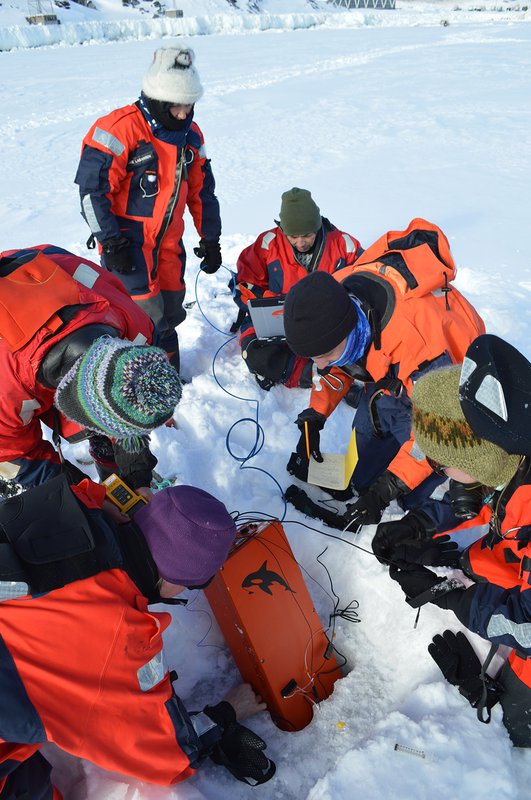