Engineers at Caltech and ETH Zürich in Switzerland have created a method to systematically design metamaterials using principles of quantum mechanics.

Their work could pave the way for wider use of metamaterials in more mainstream applications by creating a purpose-driven framework for their design.

Metamaterials are engineered materials that exploit the geometry of their internal structure to manipulate incoming waves. For example, a metamaterial that manipulates electromagnetic waves might bend light in an unusual way to create a cloaking device. Meanwhile, a wafer-thin acoustic metamaterial might reflect incoming sound waves to soundproof a room.

This ability to control waves derives from how the material is structured, often on a microscopic scale. In 2010, Caltech researchers developed an optical metamaterial that uses a surface coated with three-dimensional structures to redirect light as desired. More recently, engineers at Caltech showed that flat surfaces coated with tiny pillars of silicon could focus light like a lens.

Picture a crystal—a solid whose physical properties are determined by the way it is built from a repeating series of atomic structures. Carbon atoms structured in flat plates create crumbly graphite, while carbon atoms structured in tetrahedra create ultra-hard diamonds. Similarly, metamaterials are constructed from a repeating series of nano- and micro-scale structures that give them their unique properties.

Despite their promise and wide array of possible applications, metamaterials will not be used widely unless engineers can design them to have particular desired properties. While much progress has been made in the design of metamaterials that interact with electromagnetic waves, overall, the design of mechanical metamaterials—those that influence mechanical waves, such as sound waves or seismic waves—remains a scattershot affair, says Chiara Daraio, a professor of mechanical engineering and applied physics at Caltech.

"Before our work, there was no single, systematic way to design metamaterials that control mechanical waves for different applications," she says. "Instead, people often optimized a design to fulfill a specific purpose, or tried out new designs based on something they saw in nature, and then studied what properties would arise from repeated patterns."

To address this, a team led by Daraio and consisting of graduate students Marc Serra Garcia and Antonio Palermo, postdoctoral scholar Katie Matlack, and professor Sebastian Huber at ETH Zürich, turned to the field of quantum mechanics. On the surface, the choice was an unlikely one. Quantum mechanics governs the often-counterintuitive behavior of subatomic particles, and would seem to have no bearing on the micro- and macro-scale designs of the metamaterials studied by Daraio's team.

Quantum mechanics predicts the existence of certain exotic types of matter: among them, a "topological insulator" that conducts electricity across its surface while acting as an insulator in its interior. Daraio's team realized that they could build macro-scale versions of these exotic systems that could conduct and insulate against vibrations instead of electricity by using principles of quantum mechanics. In quantum mechanics, materials can sometimes be described as an ensemble of interacting particles. "Imagine that each particle is a tiny mass, connected to its neighbors by springs," she explains. "Each particle reacts to incoming waves in a unique way that is determined, in part, by the reaction of its neighbors. In our approach, we apply this mass-and-spring model to macroscopic, elastic materials, maintaining their characteristic properties."

Because metamaterials are built from arrays of geometrical structures (that can have building blocks at the nano-, micro-, or macro-scale) that are connected in repeating patterns, Daraio and her colleagues realized that, by representing each repeating structure as an ensemble of particles, it would be possible to design many different types of metamaterials, like waveguides, acoustic lenses, or vibration insulators.

When struck by an incoming wave, each repeating structure in a metamaterial has the potential to deform in a number of different ways. That deformation is governed not only by the geometry of that structure, but also by how the structures are connected and how the other structures around them are reacting. Treating this as a system of masses and springs, Daraio's team was able to predict how these systems would react, and then engineer them to react in desired ways.

It is complicated, but also predictable—which is the important part.

As a theoretical proof of concept, Daraio's team designed metamaterials made from a series of rectangular millimeter-scale plates, each loosely connected to one another like a piece of a puzzle. By tuning the design of the plates and how well-connected the plates were, the team created a perfect acoustic lens that focuses sound without loss of signal. The plates also act as a waveguide that directs and slows the propagation of sound. The method could be used to design many other devices or sensors where high sensitivity, precision, or control are necessary, Daraio says. The work was published in Nature Materials on January 15.

Though Daraio's work is theoretical, validated using computer simulations, her coauthors at ETH used the method to design and build a 10 by 10-centimeter silicon wafer that consists of 100 small plates connected to each other via thin beams. When the wafer is stimulated using ultrasound, only the plates in the corners vibrate; the other plates remain still, despite their connections. The device could be used as a precise waveguide in a communications network. Their work was published in Nature on January 15.

The design process described can also be used to design optical metamaterials, antennas, and optical signal processing devices, says Daraio. Their paper is titled "Designing perturbative metamaterials from discrete models." This work was funded by ETH Zürich and the Swiss National Science Foundation. 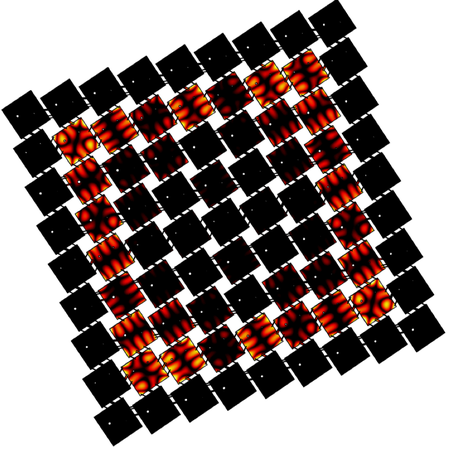 An illustration of a metamaterial designed by Daraio's team. Though each individual square is identical, their layout and the metamaterial's overall design cause waves to propagate in a specific pattern through the material, as indicated by the squares' different colors. Credit: Chiara Daraio/Caltech
Image Lightbox 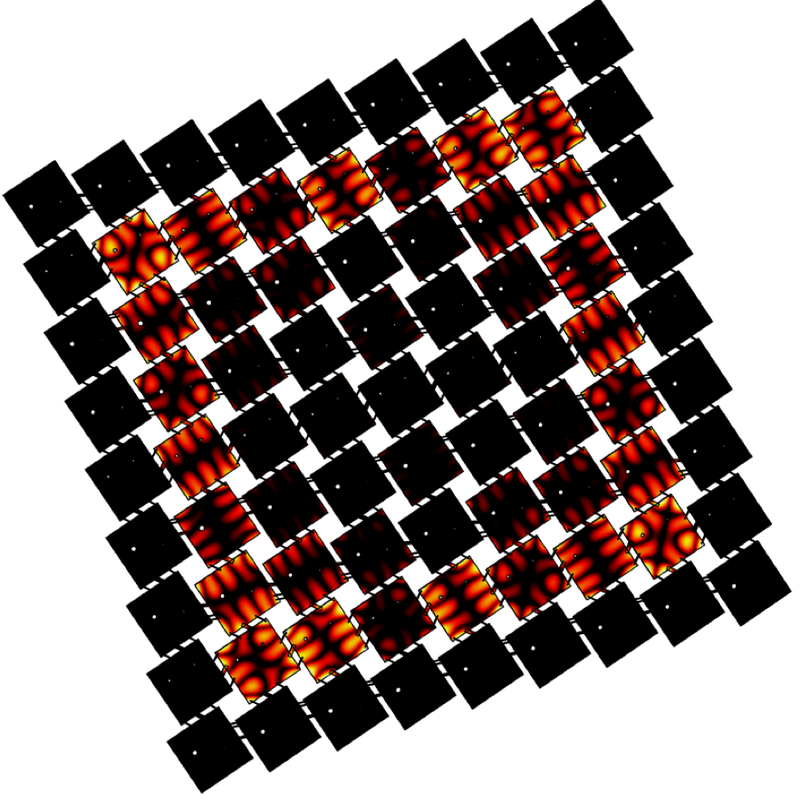 An illustration of a metamaterial designed by Daraio's team. Though each individual square is identical, their layout and the metamaterial's overall design cause waves to propagate in a specific pattern through the material, as indicated by the squares' different colors.
Credit: Chiara Daraio/Caltech
Download Full Image
Subscribe
The Caltech Weekly