A team of researchers led by Caltech's Hyuck Choo has developed an eye implant for glaucoma patients that could one day lead to more timely and effective treatment.

If you have ever been to an ophthalmologist, you have probably had your eye pressure checked: with your chin resting on a support to keep your head still, the doctor applies pressure to your eye either via a puff of warm air or by gently pressing a probe against the eye's surface. By measuring the amount that surface deforms as a result of a known amount of pressure, the ophthalmologist can calculate a rough estimate of the intraocular pressure.

While effective enough for routine eye exams, the technique is not sufficient for patients suffering from glaucoma. Glaucoma affects more than 2 million people in the United States, and is the second leading cause of blindness after cataracts. It is actually a family of eye diseases that are characterized by an increase in the pressure of the fluid inside the eye. That pressure damages the optic nerve at the back of the eye.

Glaucoma patients can experience episodes of elevated eye pressure that occur relatively suddenly, over the course of a few hours. To prevent permanent damage, it is crucial to swiftly apply medication to reduce that pressure. As such, glaucoma patients would benefit from easier and more accurate readings, says Choo, assistant professor of electrical engineering in the Division of Engineering and Applied Science and a Heritage Medical Research Institute Investigator.

"For glaucoma patients, it's important to be able to take regular and exact measurements of eye pressure. It would be good if that didn't require constantly visiting a doctor's office," he says.

Choo leads a team in the Andrew and Peggy Cherng Department of Medical Engineering at Caltech that has developed a novel eye implant designed to measure intraocular pressure. While he is still fine-tuning his design, he estimates that it could be ready for FDA review within a few years.

Eye implants to measure pressure already exist, but those devices are several millimeters in diameter—bulky for an object that has to be inserted into the eye—because they require battery-powered electronics as well as antennae to transmit the data they collect.

By contrast, Choo has developed a passive system that eschews electronics and so needs no batteries and has no antennae. At just 600–800 micrometers in diameter, the sensor is the width of a few strands of hair. It consists of a flat cylinder, just 600 micrometers in overall height, with a reflective surface on the back and a deformable membrane at the front. The tiny gadget is designed to be implanted just below the surface of the eye, where it can detect pressure changes in eye fluid.

To gauge the pressure inside the eye, a handheld device, designed by the team, is used to shine a light onto the implant. Changing eye pressure deforms the implant's membrane, altering the distance between the membrane and the reflective surface; this, in turn, alters the wavelength of the light that is reflected off that surface. Measuring the wavelength of the reflected light, then, gives a direct measure of intraocular pressure.

"A doctor implants the sensor in the eye, and then you can scan it any time you like with a device that's as simple to use as a supermarket checkout stand's barcode scanner," says Vinayak Narasimhan, graduate student in medical engineering.

A smaller device could be inserted with a smaller incision that would allow patients to recover more quickly. Further, because they lack electronics, Choo's implants have a potentially limitless lifetime.

One obstacle that all bioimplants face, however, is fouling by the body's own defense mechanisms. To a white blood cell, a vision-saving eye implant is no different than a vision-destroying microbe. Both will be treated as a foreign invader, and attacked. This immune system assault can lead to the accretion of cellular material around the implants, reducing their effectiveness.

One potential solution, as Choo and his team reported in a recent paper in the journal Advanced Healthcare Materials, involves using an exterior ring made of silicon that is "rough" at the nanoscale, so that it scatters light rather than reflecting it. That light-scattering rough surface—which gives the ring a black appearance—also discourages cells from latching onto the device, preventing it from getting gummed up by biomaterial after implantation. Furthermore, the fact that black silicon does not reflect light well makes it easier for the handheld sensor to get a reading from the reflective surface inside the device.

Next, the team plans to explore other materials that could further improve the device's functionality.

The paper describing the use of black silicon in the implant is titled, "Biocompatible Multifunctional Black-Silicon for Implantable Intraocular Sensor." The co-first author of the paper was Jeong Oen Lee, senior postdoctoral scholar in electrical engineering and medical engineering at Caltech. Other coauthors include Blaise Ndjamen, senior postdoctoral scholar in medical engineering at Caltech, and Juan Du and David Sretavan of UC San Francisco. This research was funded by the National Institutes of Health, the Heritage Medical Research Institute, Caltech, and the Powell Foundation. 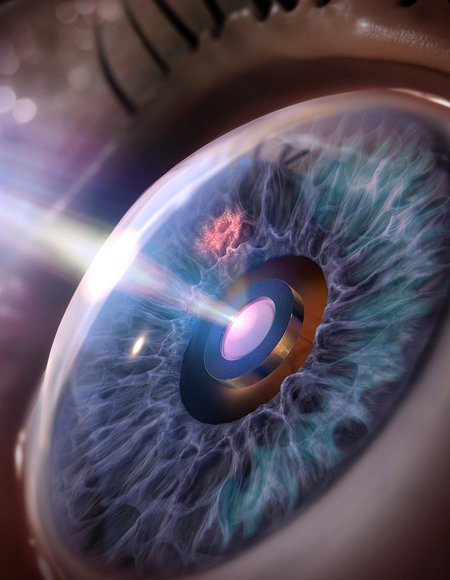 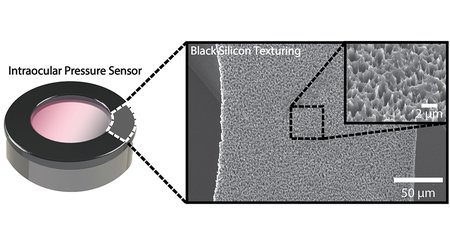 The rough texture of the black silicon used to build the sensor discourages biological material from latching onto its surface. Credit: Courtesy of Vinayak Narasimhan, the H. Choo Laboratory/Caltech 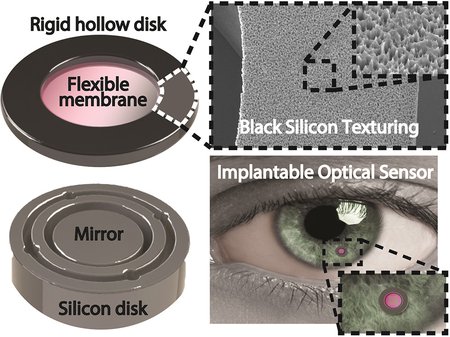 Illustration shows the scale of the sensor in relation to the eye, as well as the location at which it would be implanted. Credit: Courtesy of Vinayak Narasimhan, the H. Choo Laboratory/Caltech
Image Gallery Lightbox 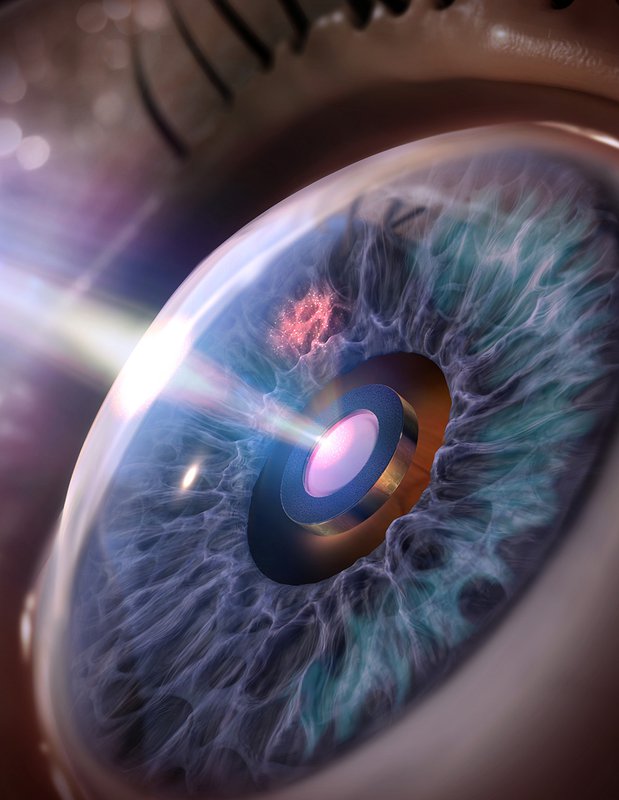 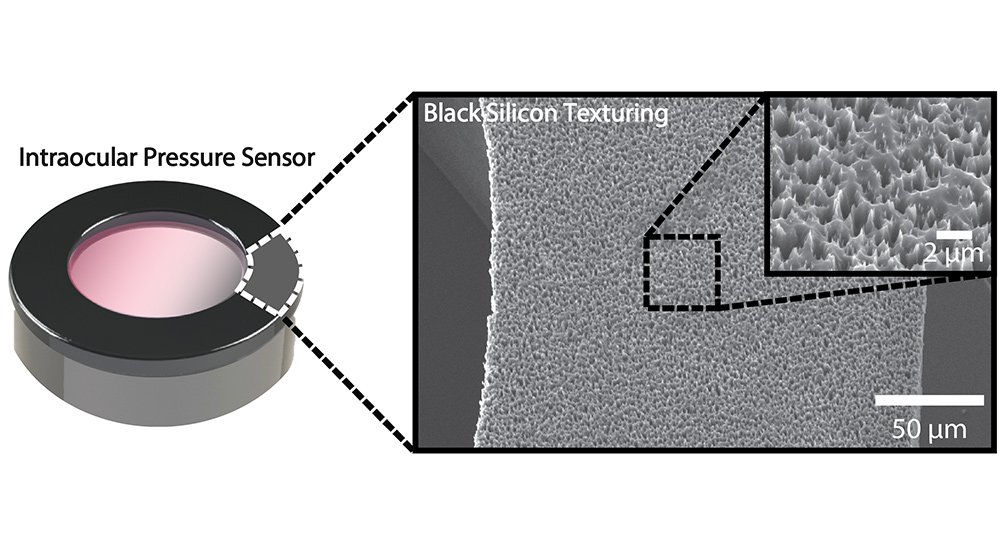 The rough texture of the black silicon used to build the sensor discourages biological material from latching onto its surface.
Credit: Courtesy of Vinayak Narasimhan, the H. Choo Laboratory/Caltech
Download Full Image 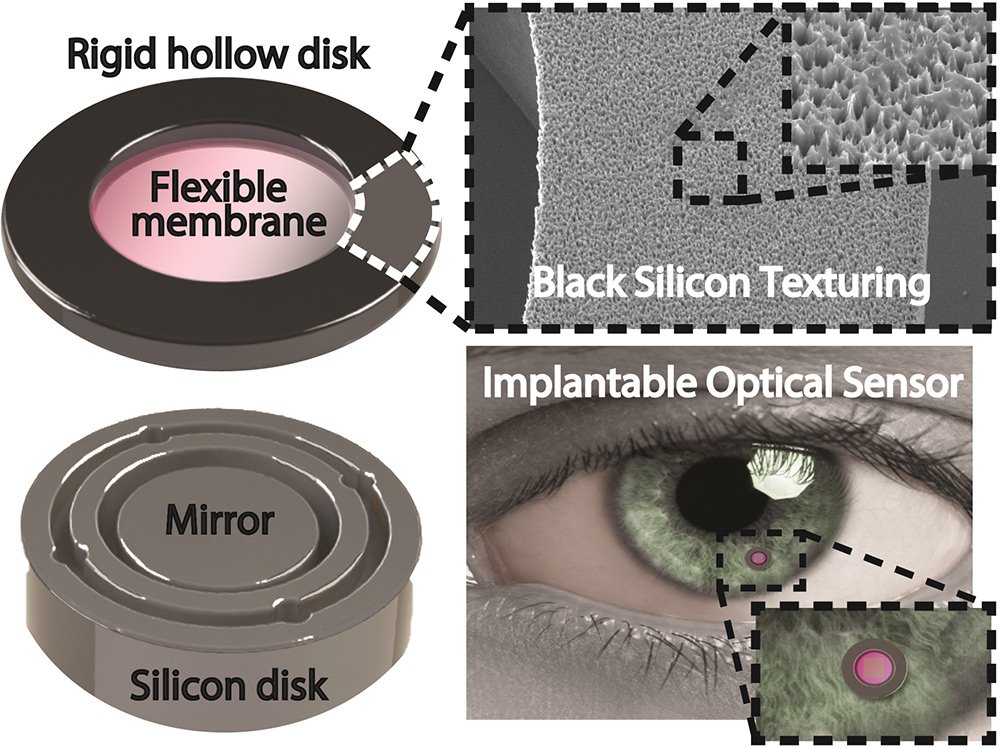 Illustration shows the scale of the sensor in relation to the eye, as well as the location at which it would be implanted.
Credit: Courtesy of Vinayak Narasimhan, the H. Choo Laboratory/Caltech
Download Full Image