WASHINGTON—Astronomers observing a disk of matter spiralling into a black hole in our galaxy have discovered that the black hole periodically hurls the inner portion of the disk into space as jets travelling at near the speed of light.

According to Stephen Eikenberry, an astrophysicist at the California Institute of Technology, the superhot gas in the inner disk shines brightly in X-rays, and dramatic dips in the X-ray emission suggest that the inner disk vanishes every 20 to 40 minutes. Infrared and radio observations at the same time show huge flares which indicate that matter is being thrown out of the system.

Eikenberry and colleagues from the Massachusetts Institute of Technology and NASA's Goddard Space Flight Center will discuss their findings at a 9:30 a.m. press conference on Wednesday, January 7, during the winter meeting of the American Astronomical Society.

The scientists observed the disappearance of the inner portion of the disk, known as an accretion disk, at the same time that glowing plasma is ejected from the black hole system. In August, Eikenberry and his collaborators at Caltech observed infrared flares from the black hole system, known as GRS 1915+105, using the Mt. Palomar 200-inch telescope.

At the same time, Ronald Remillard and his collaborators at MIT monitored X-ray dips from the same black hole using NASA's Rossi X-ray Timing Explorer (RXTE) satellite. Jean Swank and her collaborators at NASA/GSFC observed similar dips, antion between the disappearance of the inner disk and the jet ejection has never been seen until now."

"This work is also exciting because it may help us understand many other types of systems with jets," notes Robert Nelson, who works with Eikenberry at Caltech. "Astronomers have found jets in a wide range of objects, from quasars—incredibly powerful objects seen out to the edge of the observable universe—to young protostars."

The half-hour spacing between the ejections may be telling researchers that what they had thought were smooth, continuous outflows may in fact be intermittent explosions.

"There are many fine details in the X-ray dips that we may now seriously investigate to better understand the ejection mechanism," adds Edward R. Morgan, who works with Remillard at MIT. "In particular, there is a very unusual X-ray flash at the bottom of these dips in which the X-ray spectrum changes significantly. This may be the trigger for the rapid acceleration of the disk material."

When a black hole pulls gas from the atmosphere of a companion star, the matter spirals in toward the event horizon like water going down a drain, and the swirling disk created by the flow is known to astronomers as an "accretion disk." The gas in the disk heats up dramatically due to the large acceleration and friction. Just before entering the event horizon, the gas reaches temperatures of millions of degrees, causing it to glow in X-rays.

In 1994, Mirabel and Luis Rodriguez observed radio emission from jets in GRS 1915+105, and they determined that the speed of the jets was greater than 90 percent of the speed of light, or roughly 600 million miles per hour. Since RXTE began observing the X-ray sky in early 1996, the exceptionally chaotic behavior of GRS 1915+105 in X-rays has been chronicled on many occasions.

The new results gained by Eikenberry's team brings together these phenomena by showing that modest jet ejections and the pattern of X-ray variations are synchronized in an organized way.

"The repeated ejections are really amazing," says Craig Markwardt, a member of the NASA/GSFC team. "The system behaves like a celestial version of Old Faithful. At fairly regular intervals, the accretion disk is disrupted and a fast-moving jet is produced."

"This jet is staggeringly more powerful than a geyser," adds Swank. "Every half hour, the black hole GRS 1915+105 throws off the mass of an asteroid at near the speed of light. This process clearly requires a lot of energy; each cycle is equivalent to 6 trillion times the annual energy consumption of the entire United States."

"Since the disk-jet interaction is so poorly understood, we're hoping that further analysis of these observations will show us more details of what is happening so close to the black hole," Eikenberry says. "We're planning more detailed studies for the coming year which should give us even more clues as to the nature of these incredibly powerful events.

"Right now, we still aren't even sure why these dips and ejections occur every half hour or so—why not every week or every 30 seconds, for instance? 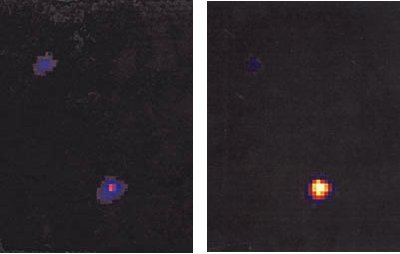