Biomarker for Parkinson's Disease May Originate in the Gut

Parkinson's disease (PD) is a debilitating neurodegenerative disorder, impairing the motor functions of millions of elderly people worldwide. Often, people with PD will experience disturbances in gastrointestinal function, such as constipation, years before motor symptoms set in.

Postmortem examinations of the brains of people with PD have shown that their brain cells that control movement are littered with aggregates, or clumps, of a protein called alpha-synuclein (α-Syn). Now, working with mouse models, Caltech researchers have seeded α-Syn aggregates in neurons in the gut and discovered that these clumps can travel up to affect neurons in the brain—but this process depends on age.

Normally, mice produce an enzyme that is able to break down these clumps, but as they get older, they may lose this ability, which could explain why PD develops most often in elderly people. The researchers showed that injecting mice with systemic delivery vectors carrying genes that encode for this enzyme helped ameliorate some of the clumping and partially restored proper gut function.

A paper describing the research appears in the February 17 issue of the journal Nature Neuroscience. The work was led by researchers in the laboratory of Viviana Gradinaru (BS '05), professor of neuroscience and biological engineering, Heritage Medical Research Institute Investigator, and director of the Center for Molecular and Cellular Neuroscience at the Tianqiao and Chrissy Chen Institute for Neuroscience at Caltech.

As α-Syn aggregates have also been found in neurons in the intestines of people with PD, some researchers hypothesize that α-Syn aggregation begins first in the nervous system of the gut. The idea is that the protein aggregates then hop from neuron to neuron, traveling from the gut nervous system up the vagus nerve and into the brain, seeding the formation of additional aggregates along the way.

"The vagus nerve is a physical connection between neurons in the gut and neurons in the brain. If these damaging protein clusters first originate in gut neurons, then in the future we may be able to diagnose PD earlier and potentially use gene delivery to restore functions to the cells so that they can clean up the aggregates," says Collin Challis, former postdoctoral scholar and first author on the study.

To test this, the Caltech team injected the gastrointestinal lining of mice with αSyn aggregates and then monitored the aggregates to see if they were progressing up to the brain stem.

In adult mice, the team did find progression of αSyn clusters, but they did not see the development of motor impairments. The αSyn clusters also progressed in elderly mice (about 16 months old), but these mice exhibited both gastrointestinal disturbances—impaired gastric motility and fecal pellet hydration—and motor symptoms.

The question for the team, says Challis, was why these aggregates cause motor disturbances in older mice, whereas younger animals are not affected. "As we get older, we're not as efficient at dealing with pathogens or misfolded proteins. Parkinson's disease may be an example of this," he says.

It was known that the enzyme glucocerebrosidase (GCase) has the ability to break down αSyn clusters. This enzyme is naturally produced by mice—and an analog works similarly in humans—but if a mouse loses the ability to make it, αSyn proteins begin to cluster together.

To study GCase's effect on PD-related symptoms, the team used mice that were genetically engineered to overproduce αSyn and injected the animals with genes that encode for GCase. These genes were packaged in a variant of adeno-associated virus (AAV), a harmless viral shell that was previously engineered by the Gradinaru lab as a kind of delivery vehicle to get genetic material into gut cells via the bloodstream. The team found that GCase partially restored normal gut function in these mice and decreased the aggregates in gut neurons.

"Mutations in the gene that encodes GCase are responsible for Gaucher disease and a risk factor in PD. Our work shows that this gene can be delivered by AAVs to rescue gastric symptoms in mice, and emphasizes that peripheral neurons are a worthwhile target for treating PD, in addition to the brain," Gradinaru says. 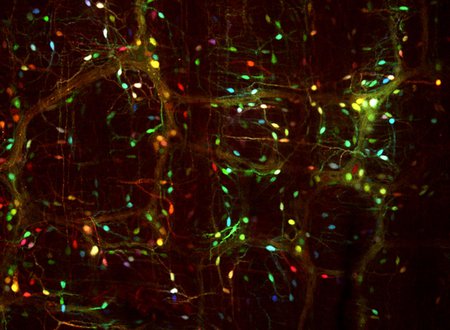 The Gradinaru laboratory develops and utilizes viral vectors to deliver desired genes into specific cells through a non-invasive injection into the bloodstream. Here, genes for three fluorescent proteins are delivered by viral vectors into cells in the gastrointestinal nervous system. This technology can be used for labeling and imaging cells, as seen here, or to deliver genes that could ameliorate diseases. Credit: Gradinaru laboratory / Caltech
Image Lightbox
Subscribe
The Caltech Weekly