Biology, With a Beat

This term, students in Biology 1—Principles of Biology—were offered a novel alternative to the traditional final exam: the opportunity to create a two-to-four-minute video explaining some aspect of biology in an interesting, entertaining and, yes, musical way.

Bi 1 is a large lecture course for nonmajors and, for most of them, as close as they will come to biology during their undergraduate career. As the class's instructor, Dianne Newman, professor of biology and geobiology, explains, "It's almost an absurd challenge. How do you teach biology in a substantive and engaging way in 10 weeks to students whose primary interests lie elsewhere?"

Newman found at least one way to meet that challenge. "I have a mid-session break in my class because it's an hour and a half long," says Newman. "After 45 minutes, I show a short video that relates to the content of my lecture just to break things up, to give students a chance to stretch and reengage." One day in April, Professor Newman showed a rap video on Hox gene development created by Stanford students. "The Hox genes are regulatory genes in eukaryotes that are critical for development," says Newman. "It was such a clever video. And so, off the cuff, I said to my Bi 1 students, 'These Stanford kids are pretty good. If any of you can come up with something equally outstanding, I'll give you an automatic A in the class.'"

After class, to Newman's surprise, a student came up to ask exactly what the rules were for this automatic A. If they did a video, could they skip the midterm? Could they skip the final? What about the assignment requiring students to write a hypothesis-driven paper on a topic of their choice? Disarmed, Newman promised she would soon send the class an email that would explain it all. She reflected on the idea and then laid out the rules for the Bi 1 video challenge: an automatic A on just the final exam, but only if the video adhered to a stringent set of rules regarding originality, scientific content, and aesthetic value.

Newman was skeptical anyone would take on the challenge, but in the end, six videos were submitted. All were screened on June 4, the last day of class. All of the students in the class were given clickers to vote on each video—giving it an A, B, or C, based on how well the video fulfilled the criteria. Newman promised to take their votes into consideration as she made her decisions about the adequacy of each video. Newman further enlisted some special A-list guests to attend the showing and give their reactions: Harry Gray, the Arnold O. Beckman Professor of Chemistry and founding director of the Beckman Institute; Jonas Peters, the Bren Professor of Chemistry; Cindy Weinstein, vice provost and professor of English; and Bil Clemons, professor of biochemistry. As an added surprise to the students, President Thomas Rosenbaum stopped in for the viewing.

Student videos covered a range of topics, from photosynthesis to metabolism to respiration, and employed a variety of styles, with each video showcasing the unique personalities and creative talents of their creators. Tyler Perez (freshman, planetary science) and Nicholas Meyer (freshman, physics), for example, created a video titled "A Rap about GFP" (GFP, or green fluorescent protein, is used as a marker to visualize protein localization and gene expression). Perez notes that the main challenge was not having a dedicated cameraman, creating the need for "planning the shots beforehand, setting up the tripod, running to the scene to do the acting/dubbing, running back to check the shot, move the camera, repeat."

Rachael Morton (freshman, computer science) and Roohi Dalal (freshman, physics and history) described details about the nuclei of differentiated cells to the tune of Taylor Swift's "Blank Space" in a video they called "Enucleated Space." Morton recalls spending "a few interesting afternoons walking around campus in formal wear, lugging around cameras while lip syncing, as confused-looking tour groups and classmates passed by."

Ashwin Balakrishna (freshman, electrical engineering) and Kelly Woo (freshman, electrical engineering) collaborated on "Photosynthesis," rapping out lyrics like "ATP synthase she the center of it all/I got H+ gradient and now it comes into call" (inspired by Drake's rap video for "Energy"). Woo says, "As corny as this sounds, shooting this video really allowed me to slow down and appreciate how beautiful our campus is."

This may sound like a lot of fun and only a little science, but the Caltech faculty reviewers were impressed. "I'm a little prouder to be a professor at Caltech today," Peters said.

Harry Gray, after viewing the video on respiration created by Ashwin Hari (freshman, computer science) and Hanzhi Lin (freshman, computer science), humorously noted, "I've been studying respiration for a long time, but I learned more in this video than I have in 30 years. I hope you guys will make a lot more videos. I'm going to come to all of them so I don't have to spend all that time reading stupid journals."

While reviewing freshman Tara Shankar's (freshman, computer science) video, "Metabolism, Let's Break it Down," Jonas Peters tried to recruit the computer science major to chemistry. He even offered a powerful incentive: "If Professor Newman doesn't give you an A on the final for this video, you can take any course in CCE [the Division of Chemistry and Chemical Engineering], and we will give you an A."

After the last video was shown, Peters, on a more serious note, drew students' attention to all the opportunities that they—as nonmajors in biology—could bring to biology from their very different "corners of the campus."

"Professor Newman's enthusiasm for the class was mirrored by the joie de vivre of the students, who sang, danced, and rapped their way through the central themes of Bi 1," says Weinstein. "Seeing students bring such intelligence, creativity, and downright fun to their studies reminds us of the rewards that come to teachers who inspire."

So did these students earn their prize, the opportunity to spend another afternoon singing and dancing their way across campus while their fellow Bi 1 students grind out their final? The jury—a one-woman jury named Dianne Newman—is still out, but it looks as though the Bi 1 video challenge will be finding its way onto her next Bi 1 syllabus. 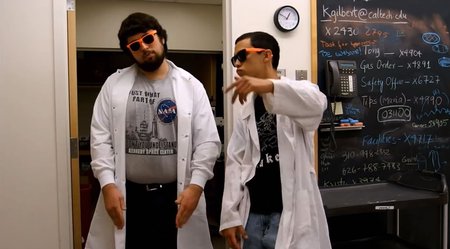 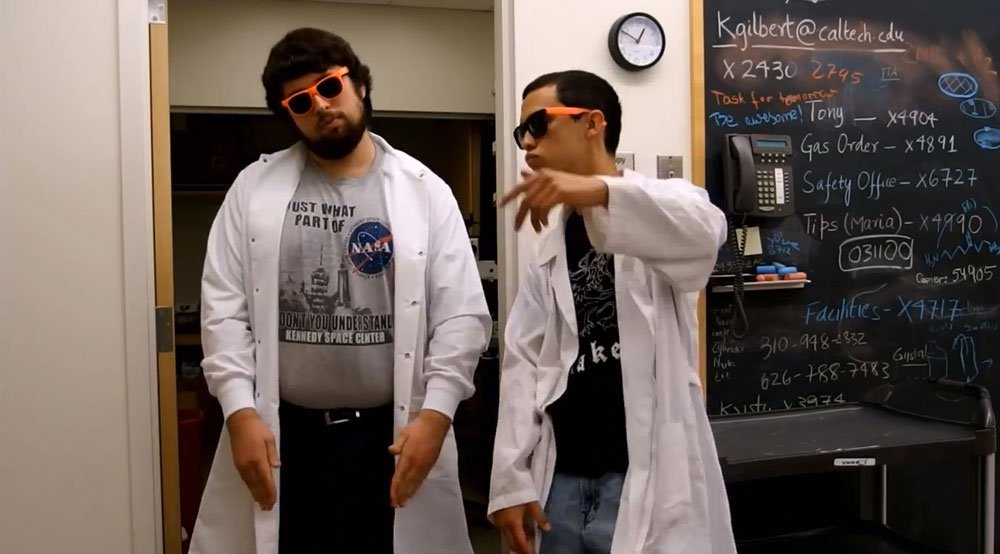