A new helper in the fight against cancer and other diseases of the gut may be genetically altered bacteria that release medicines to tumors or the gut.

Now, a new study performed using mice demonstrates how doctors might one day better regulate those therapeutic microbes by engineering them to respond to temperature. For instance, if engineered bacteria were administered to a patient with a disease, doctors could, in theory, instruct the bacteria to release medicine to just the site of interest, and nowhere else in the body, by using ultrasound to gently heat up the tissue.

"Bacteria can be designed to act like special agents fighting disease in our bodies," says Caltech's Mikhail Shapiro, assistant professor of chemical engineering and Heritage Principal Investigator, whose overall research goal is to create new ways to both visualize and control cells—bacterial cells and human cells—for medicinal purposes. "We're building walkie-talkies for the cells so we can both listen and talk to them."

Shapiro is principal investigator on a paper about the new research published November 14 in the journal Nature Chemical Biology. The colead authors are Dan Piraner and Mohamad Abedi, graduate students in Shapiro's lab.

The research also shows how these engineered bacteria, once in a patient, could be programmed to stop administering a therapeutic or to self-destruct if the patient's temperature rises from a fever. A fever might signal that the therapy is not working, and thus it would be in the patient's best interest for the bacteria to terminate its activity.

In another application of the technology, the researchers demonstrated how the bacteria could be designed to destroy themselves once they leave a patient's body through defecation. The lower temperature outside of a host's body would signal the engineered bacteria to activate a genetic kill switch, thereby alleviating concerns about the genetically altered microbes spreading to the environment.

"We can use these thermal switches in bacteria to control a variety of behaviors," says Shapiro.

The strategy of using engineered bacteria to fight disease—part of a growing field called microbial therapeutics—has shown some promise in animal models and humans. Previous research has demonstrated that some bacteria naturally make their way to tumor sites because they prefer the tumors' low-oxygen environments. Studies have shown that these bacteria can be directed to release a medicine onto tumors, such as the tumor-destroying drug hemolysin. Other studies have shown that bacteria administered to the gut can release molecules to reduce inflammation. But these bacteria might end up in other portions of the body, and not just at the sites of interest.

The glowing images in this animation were drawn on petri-dish plates with bacteria. The bacteria were engineered to respond to temperature changes. The bacteria seen in the tree express green fluorescent protein at temperatures above 36 degrees Celsius. Bacteria seen in the sun express a red fluorescent protein above 40 degrees Celsius. Bacteria in the lawn have both the green and red thermal switches, and thus turn yellow at the higher temperatures. Credit: Shapiro Lab/Caltech

The method developed by Shapiro's lab solves this problem by providing a mechanism through which bacteria can be instructed to direct drugs only to a specific anatomical site. The idea is that the genetically engineered bacteria would activate their therapeutic program at a certain temperature induced via ultrasound tools, which gently heat tissues with millimeter precision. A doctor could, in theory, administer genetically altered bacteria to a cancer patient and then, by focusing ultrasound at the tumor site, trigger the bacteria to fight the tumor.

"We can spatially and temporally control the activity of the bacteria," says Abedi. "We can communicate with them and tell them when and where something needs to be done."

To create thermally controllable bacteria, the team first needed to find candidate genetic switches whose activity depends on temperature changes. They ultimately identified two candidates. The first is a protein in Salmonella bacteria, and the second originates from a bacterial virus called a bacteriophage. Both proteins bind to DNA to turn a genetic circuit on or off in response to temperature.

Next, the scientists used a protein engineering technique—"directed evolution," pioneered by Caltech's Frances Arnold—to evolve the proteins in the lab and tune their switching temperatures. For instance, the Salmonella protein was originally activated by temperatures ranging between 42 and 44 degrees Celsius. Using directed evolution, the scientists generated versions with activation temperatures between 36 and 39 degrees Celsius. When these genetic switches are used to control the expression of therapeutic proteins, they can act like thermal controls to turn the therapy on or off at a given temperature.

"When we were thinking about how to get bacteria to sense temperature, we looked at nature and found a few systems where bacteria can do this," says Piraner. "We tested the performance, found the ones that had the best switching performance. From there, we went on to find that they could be tuned and amplified. It all started with what nature gave us, and engineering took us the rest of the way."

The study, titled, "Tunable Thermal Bioswitches for In Vivo Control of Microbial Therapeutics," was funded by the Defense Advanced Research Projects Agency, the Weston Havens Foundation, the Burroughs Wellcome Career Awards at the Scientific Interface, and the Heritage Medical Research Institute as well as through graduate fellowships from the National Science Foundation and the Paul and Daisy Soros Fellowship for New Americans. Other Caltech coauthors are Brittany Moser, now a PhD student at UC Irvine, and research technician Audrey Lee Gosselin. 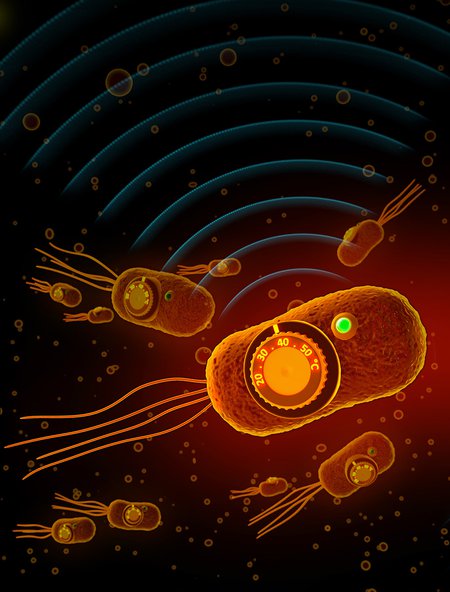 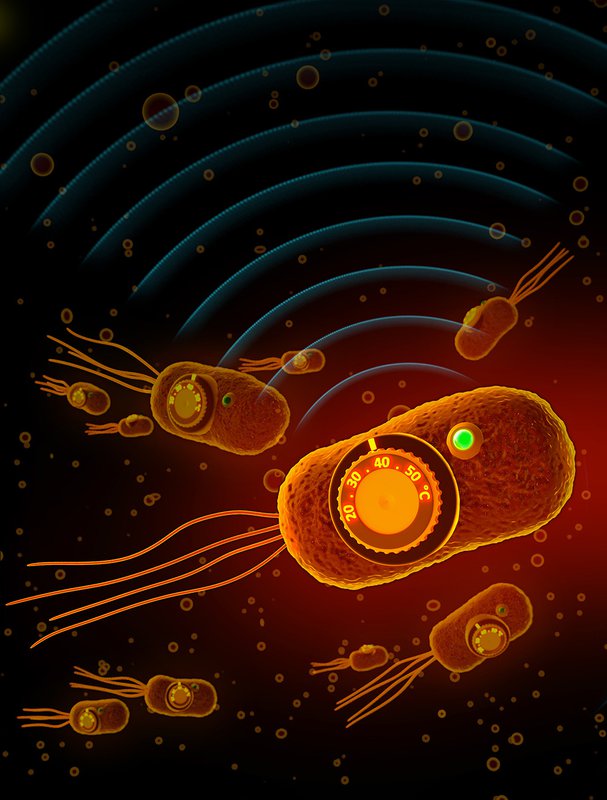