Astronomers announced today that they have acquired the first direct evidence that gravitational waves rippled through our infant universe during an explosive period of growth called inflation. This is the strongest confirmation yet of cosmic inflation theories, which say the universe expanded by 100 trillion trillion times in less than the blink of an eye.

"The implications for this detection stagger the mind," says Jamie Bock, professor of physics at Caltech, laboratory senior research scientist at the Jet Propulsion Laboratory (JPL) and project co-leader. "We are measuring a signal that comes from the dawn of time."

Our universe burst into existence in an event known as the Big Bang 13.8 billion years ago. Fractions of a second later, space itself ripped apart, expanding exponentially in an episode known as inflation. Telltale signs of this early chapter in our universe's history are imprinted in the skies in a relic glow called the cosmic microwave background. Tiny fluctuations in this afterglow provide clues to conditions in the early universe.

Small, quantum fluctuations were amplified to enormous sizes by the inflationary expansion of the universe. This process created density waves that make small differences in temperature across the sky where the universe was denser, eventually condensing into galaxies and clusters of galaxies. But as theorized, inflation should also produce gravitational waves, ripples in space-time propagating throughout the universe. Observations from the BICEP2 telescope at the South Pole now demonstrate that gravitational waves were created in abundance during the early inflation of the universe.

On Earth, light can become polarized by scattering off surfaces, such as a car or pond, causing the glare that polarized sunglasses are designed to reduce. In space, the radiation of the cosmic microwave background, influenced by the squeezing of gravitational waves, was scattered by electrons, and became polarized, too.

In order to detect this B-mode polarization, the team examined spatial scales on the sky spanning about one to five degrees (two to 10 times the width of the full moon), which allowed them to gather photons from a broad swath of the cosmic microwave background in an area of the sky where we can see clearly through our own Milky Way galaxy. To do this, the team traveled to the South Pole to take advantage of the cold, dry, stable air. "The South Pole is the closest you can get to space and still be on the ground," says John Kovac of the Harvard-Smithsonian Center for Astrophysics, project co-leader and BICEP2 principal investigator. "It's one of the driest and clearest locations on Earth, perfect for observing the faint microwaves from the Big Bang."

The team also invented completely new technology for making these measurements. "Our approach was like building a camera on a printed circuit board," says Bock. "The circuit board included an antenna to focus and filter polarized light, a micro-machined detector that turns the radiation into heat, and a superconducting thermometer to measure this heat." The detector arrays were made at JPL's Microdevices Laboratory.

The BICEP2 team was surprised to detect a B-mode polarization signal considerably stronger than many cosmologists expected. The team analyzed the data for more than three years in an effort to rule out any errors. They also considered whether dust in our galaxy could produce the observed pattern, but the data suggest this is highly unlikely. "This has been like looking for a needle in a haystack, but instead we found a crowbar," says project co-leader Clem Pryke, of the University of Minnesota.

The prediction that the cosmic microwave background would show a B-mode polarization from gravitational waves produced during the inflationary period was made in 1996 by several theoretical physicists including Marc Kamionkowski, who was a member of the Caltech faculty from 1999 to 2011, and is now on the faculty at Johns Hopkins University. Kamionkowski says this discovery "is powerful evidence for inflation. I'd call it a smoking gun. We've now learned that gravitational waves are abundant, and can learn more about the process that powered inflation. This is a remarkable advance in cosmology."

The BICEP project originated at Caltech in 2002 as a collaboration between Bock and the late physicist Andrew Lange.

BICEP2 is the second stage of a coordinated program with the BICEP and Keck Array experiments, which has a co-PI structure. The four principal investigators are Bock, Kovac, Kuo, and Pryke. All have worked together on the present result, along with talented teams of students and scientists. Other major collaborating institutions for BICEP2 include the University of California at San Diego, the University of British Columbia, the National Institute of Standards and Technology, the University of Toronto, Cardiff University, and Commissariat à l'energie atomique.

BICEP2 is funded by the National Science Foundation. NSF also runs the South Pole Station where BICEP2 and the other telescopes used in this work are located. The W. M. Keck Foundation also contributed major funding for the construction of the team's telescopes. NASA, JPL, and the Gordon and Betty Moore Foundation generously supported the development of the ultrasensitive detector arrays that made these measurements possible.

The journal papers, along with additional technical details, can be found on the BICEP2 release website. 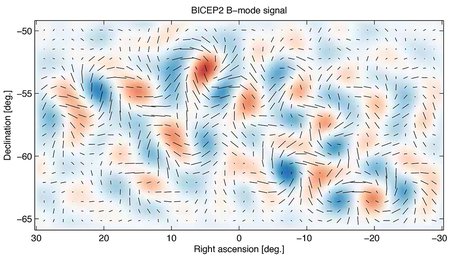 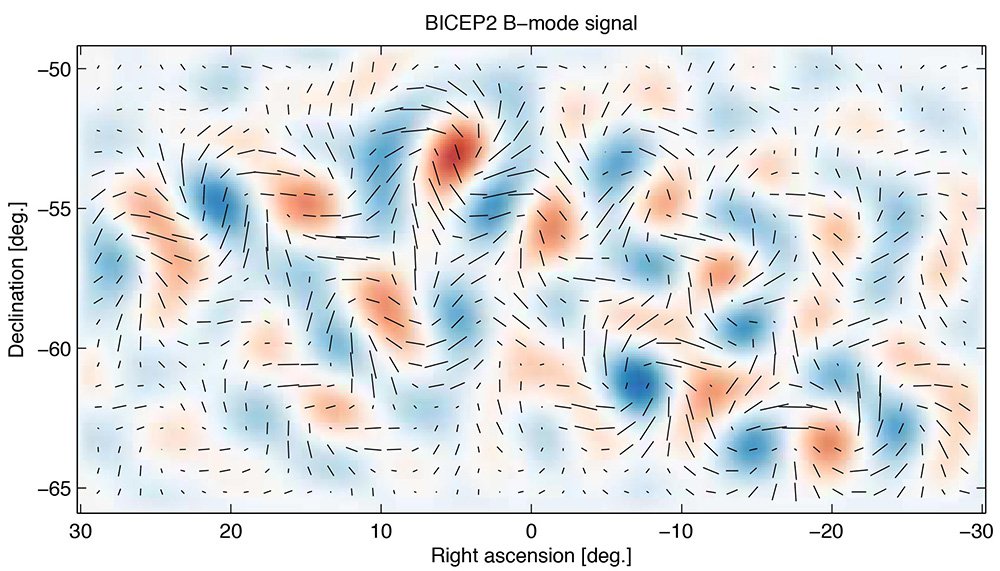 Gravitational waves from inflation generate a faint but distinctive twisting pattern in the polarization of the CMB, known as a "curl" or B-mode pattern. Shown here is the actual B-mode pattern observed with the BICEP2 telescope, with the line segments showing the polarization from different spots on the sky. The red and blue shading shows the degree of clockwise and anti-clockwise twisting of this B-mode pattern.
Credit: The BICEP2 Collaboration
Download Full Image
Subscribe
The Caltech Weekly