What makes a piece of armor effective? Sure, it needs to be strong, and it should be lightweight. But what is it about a material's composition that gives it such properties? And can we develop materials that provide even better protection? With decades' worth of investment and preparation, Caltech engineers are particularly well equipped to address such questions as part of a new Army-funded program to improve protective gear and vehicles for soldiers.

The U.S. Army Research Laboratory recently announced that it would provide up to $90 million to a consortium of researchers—led by engineers at Johns Hopkins University's newly created Extreme Materials Institute—to investigate what happens to protective materials during intense impact. The collaboration includes engineers from national laboratories, private industry, and four universities—Caltech, Johns Hopkins, Rutgers University, and the University of Delaware.

"Here at Caltech we have developed a very unique expertise and one-of-a-kind tools for trying to understand the behavior of structural materials across all scales," says Kaushik Bhattacharya, Caltech's lead in the army effort and the Howell N. Tyson, Sr., Professor of Mechanics and professor of materials science. "What the army recognizes is that such understanding can play a significant role in speeding up the process of developing new materials—a process that can take up to 20 years with standard methods."

Six engineers and applied scientists from Caltech's Division of Engineering and Applied Science will collaborate on the new project, focusing initially on magnesium alloys and boron carbide ceramics. Magnesium alloys—known by car buffs thanks to their incorporation into the wheels of fancy cars—are extremely strong, tough, and lightweight. But like most traditional alloys, they have been made empirically—that is, someone realized that by adding just so much aluminum, a little bit of zinc, and so on, they would wind up with a much stronger product than magnesium alone. No one has worked out the science explaining exactly why those small additions change the properties of the material, and so it's difficult to say if the alloys are performing at their peak or if the "recipe" could be improved.

"Right now we don't have a predictive model for designing advanced materials," Bhattacharya says. "We have some theories that guide us, but they really are not fully predictive."

Developing the level of understanding needed to create such a predictive tool is an incredibly complex problem that requires engineers and applied scientists to tap into their knowledge of multiple disciplines. They must understand the mechanics across length scales from the subnanometer level—units smaller than billionths of meters—all the way to materials that can be measured in meters. They also need to understand how materials behave across timescales from femtoseconds—millionths of billionths of seconds—up to seconds, and at various temperatures and pressures.

Part of that requires understanding how the defects in a material will behave. It would be relatively easy to model a metal with a perfect crystal configuration—where all of its atoms line up to form an ideal lattice. But as materials scientists like to say, "Crystals are like people: it is the defects in them which tend to make them interesting." These defects, such as missing atoms and misalignments, can confer beneficial properties upon the material, giving it greater strength or ductility, for example.  But they also add a level of complexity; changing the placement of a single atom can have a large effect on the rest of the material.

Along with Bhattacharya, William Goddard III, Dennis Kochmann, and Michael Ortiz will work on the theory side of the problem, using a range of tools developed at Caltech over the last two decades to accurately model the behavior of materials from the subatomic level all the way to the scale of bulk materials.

On the experimental side, Guruswami Ravichandran will investigate how a material deforms, or changes shape, at different scales and temperatures when struck by a high-speed projectile. Meanwhile, Julia Greer will look at the deformation and mechanical properties of materials at the nanoscale.

"When you have a large chunk of a metal, such as magnesium, it deforms under certain known conditions. But if you make a very small sample of the same metal, it's going to have very different mechanical characteristics," says Greer. "So if you're planning on utilizing nanotechnology at all in a production application, you need to know first what your material's properties are at its various scales. We will provide that experimental data."

In addition to their participation in the army's extreme-materials project, Caltech engineers are working on several other programs focused on multiscale modeling of materials and the development of damage-tolerant materials. Ortiz is the principal investigator and director of Caltech's Predictive Science Academic Alliance Program Center, sponsored by the National Nuclear Security Administration, which focuses on the hypervelocity impacts of metallic projectiles. For his part, Ravichandran is heading up a new Center of Excellence funded by the Air Force Research Laboratory; it will look at the physics of what happens to materials ranging from sands to layered composites when they are suddenly struck by a powerful force and deform quickly.

"When you take these major projects together, you see that studying materials in very extreme conditions is an area where Caltech engineering really stand out," says Bhattacharya. "The tools we bring, on both the theoretical and experimental sides uniquely bridge deep fundamental principles with unprecedented application." 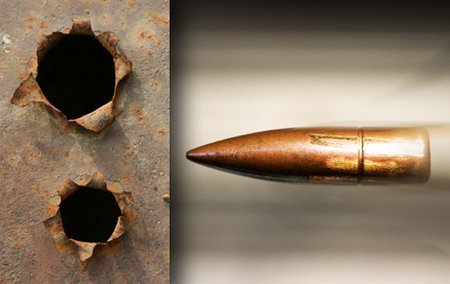 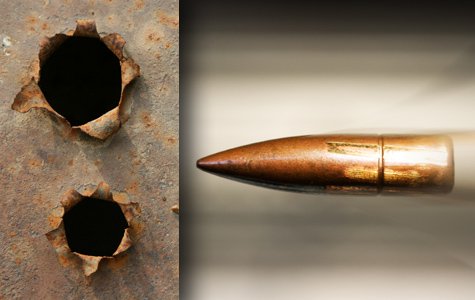