DVDs and Blu-ray disks contain so-called phase-change materials that morph from one atomic state to another after being struck with pulses of laser light, with data "recorded" in those two atomic states. Using ultrafast laser pulses that speed up the data recording process, Caltech researchers adopted a novel technique, ultrafast electron crystallography (UEC), to visualize directly in four dimensions the changing atomic configurations of the materials undergoing the phase changes. In doing so, they discovered a previously unknown intermediate atomic state—one that may represent an unavoidable limit to data recording speeds.

By shedding light on the fundamental physical processes involved in data storage, the work may lead to better, faster computer memory systems with larger storage capacity. The research, done in the laboratory of Ahmed Zewail, Linus Pauling Professor of Chemistry and professor of physics, will be published in the July 28 print issue of the journal ACS Nano.

When the laser light interacts with a phase-change material, its atomic structure changes from an ordered crystalline arrangement to a more disordered, or amorphous, configuration. These two states represent 0s and 1s of digital data.

"Today, nanosecond lasers—lasers that pulse light at one-billionth of a second—are used to record information on DVDs and Blu-ray disks, by driving the material from one state to another," explains Giovanni Vanacore, a postdoctoral scholar and an author on the study. The speed with which data can be recorded is determined both by the speed of the laser—that is, by the duration of each "pulse" of light—and by how fast the material itself can shift from one state to the other.

Thus, with a nanosecond laser, "the fastest you can record information is one information unit, one 0 or 1, every nanosecond," says Jianbo Hu, a postdoctoral scholar and the first author of the paper. "To go even faster, people have started to use femtosecond lasers, which can potentially record one unit every one millionth of a billionth of a second. We wanted to know what actually happens to the material at this speed and if there is a limit to how fast you can go from one structural phase to another."

To study this, the researchers used their technique, ultrafast electron crystallography. The technique, a new development—different from Zewail's Nobel Prize–winning work in femtochemistry, the visual study of chemical processes occurring at femtosecond scales—allowed researchers to observe directly the transitioning atomic configuration of a prototypical phase-change material, germanium telluride (GeTe), when it is hit by a femtosecond laser pulse.

In UEC, a sample of crystalline GeTe is bombarded with a femtosecond laser pulse, followed by a pulse of electrons. The laser pulse causes the atomic structure to change from the crystalline to other structures, and then ultimately to the amorphous state. Then, when the electron pulse hits the sample, its electrons scatter in a pattern that provides a picture of the sample's atomic configuration as a function of the time.

With this technique, the researchers could see directly, for the first time, the structural shift in GeTe caused by the laser pulses. However, they also saw something more: a previously unknown intermediate phase that appears during the transition from the crystalline to the amorphous configuration. Because moving through the intermediate phase takes additional time, the researchers believe that it represents a physical limit to how quickly the overall transition can occur—and to how fast data can be recorded, regardless of the laser speeds used.

"Even if there is a laser faster than a femtosecond laser, there will be a limit as to how fast this transition can occur and information can be recorded, just because of the physics of these phase-change materials," Vanacore says. "It's something that cannot be solved technologically—it's fundamental."

Despite revealing such limits, the research could one day aid the development of better data storage for computers, the researchers say. Right now, computers generally store information in several ways, among them the well-known random-access memory (RAM) and read-only memory (ROM). RAM, which is used to run the programs on your computer, can record and rewrite information very quickly via an electrical current. However, the information is lost whenever the computer is powered down. ROM storage, including CDs and DVDs, uses phase-change materials and lasers to store information. Although ROM records and reads data more slowly, the information can be stored for decades.

Finding ways to speed up the recording process of phase-change materials and understanding the limits to this speed could lead to a new type of memory that harnesses the best of both worlds.

The researchers say that their next step will be to use UEC to study the transition of the amorphous atomic structure of GeTe back into the crystalline phase—comparable to the phenomenon that occurs when you erase and then rewrite a DVD.

Although these applications could mean exciting changes for future computer technologies, this work is also very important from a fundamental point of view, Zewail says.

"Understanding the fundamental behavior of materials transformation is what we are after, and these new techniques developed at Caltech have made it possible to visualize such behavior in both space and time," Zewail says.

The work is published in a paper titled "Transient Structures and Possible Limits of Data Recording in Phase-Change Materials." In addition to Hu, Vanacore, and Zewail, Xiangshui Miao and Zhe Yang are also coauthors on the paper. The work was supported by the National Science Foundation and the Air Force Office of Scientific Research and was carried out in Caltech's Center for Physical Biology, which is funded by the Gordon and Betty Moore Foundation. 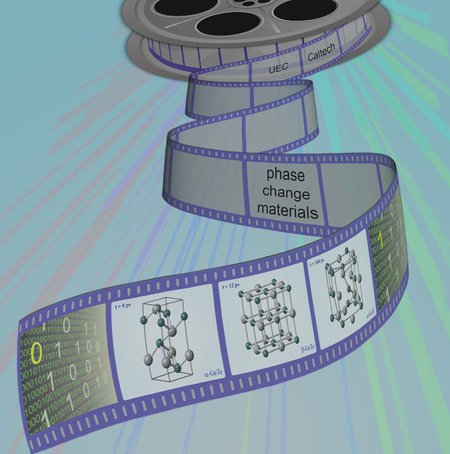 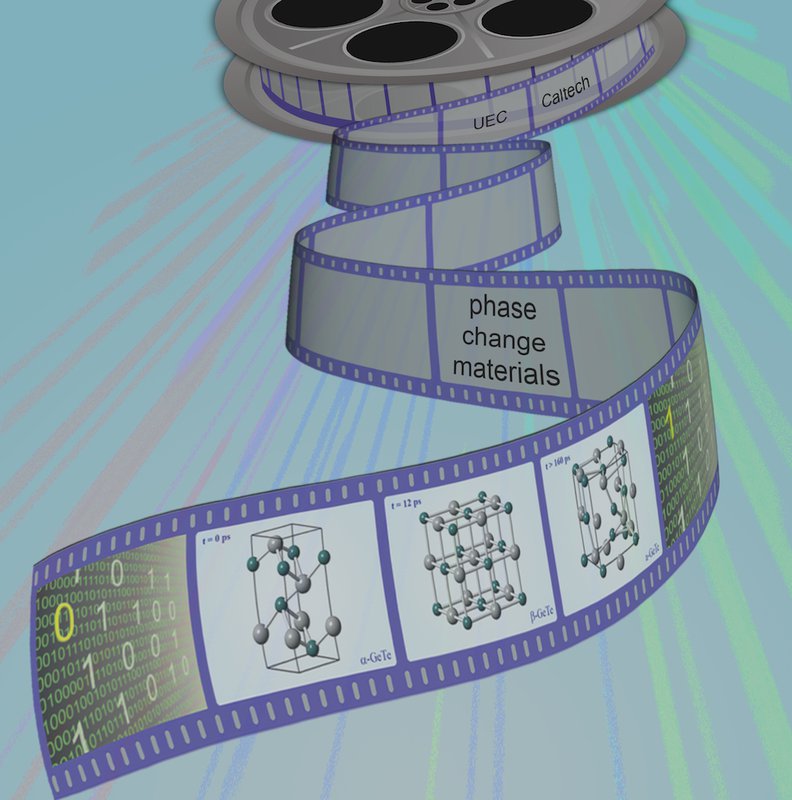