Bending the Light with a Tiny Chip

Imagine that you are in a meeting with coworkers or at a gathering of friends. You pull out your cell phone to show a presentation or a video on YouTube. But you don't use the tiny screen; your phone projects a bright, clear image onto a wall or a big screen. Such a technology may be on its way, thanks to a new light-bending silicon chip developed by researchers at Caltech.

The chip was developed by Ali Hajimiri, Thomas G. Myers Professor of Electrical Engineering, and researchers in his laboratory. The results were presented at the Optical Fiber Communication (OFC) conference in San Francisco on March 10.

Traditional projectors—like those used to project a film or classroom lecture notes—pass a beam of light through a tiny image, using lenses to map each point of the small picture to corresponding, yet expanded, points on a large screen. The Caltech chip eliminates the need for bulky and expensive lenses and bulbs and instead uses a so-called integrated optical phased array (OPA) to project the image electronically with only a single laser diode as light source and no mechanically moving parts.

Hajimiri and his colleagues were able to bypass traditional optics by manipulating the coherence of light—a property that allows the researchers to "bend" the light waves on the surface of the chip without lenses or the use of any mechanical movement. If two waves are coherent in the direction of propagation—meaning that the peaks and troughs of one wave are exactly aligned with those of the second wave—the waves combine, resulting in one wave, a beam with twice the amplitude and four times the energy as the initial wave, moving in the direction of the coherent waves.

"By changing the relative timing of the waves, you can change the direction of the light beam," says Hajimiri. For example, if 10 people kneeling in line by a swimming pool slap the water at the exact same instant, they will make one big wave that travels directly away from them. But if the 10 separate slaps are staggered—each person hitting the water a half a second after the last—there will still be one big, combined wave, but with the wave bending to travel at an angle, he says.

Using a series of pipes for the light—called phase shifters—the OPA chip similarly slows down or speeds up the timing of the waves, thus controlling the direction of the light beam. To form an image, electronic data from a computer are converted into multiple electrical currents; by applying stronger or weaker currents to the light within the phase shifter, the number of electrons within each light path changes—which, in turn, changes the timing of the light wave in that path. The timed light waves are then delivered to tiny array elements within a grid on the chip. The light is then projected from each array in the grid, the individual array beams combining coherently in the air to form a single light beam and a spot on the screen.

As the electronic signal rapidly steers the beam left, right, up, and down, the light acts as a very fast pen, drawing an image made of light on the projection surface. Because the direction of the light beam is controlled electronically—not mechanically—it can create a sort of line very quickly. Since the light draws many times per second, the eye sees the process as a single image instead of a moving light beam, says Hajimiri.

"The new thing about our work is really that we can do this on a tiny, one-millimeter-square silicon chip, and the fact that we can do it very rapidly—rapidly enough to form images, since we phase-shift electronically in two dimensions," says Behrooz Abiri, a graduate student in Hajimiri's group and a coauthor on the paper. So far, the images Hajimiri and his team can project with the current version of the chip are somewhat simple—a triangle, a smiley face, or single letters, for example. However, the researchers are currently experimenting with larger chips that include more light-delivering array elements that—like using a larger lens on a camera—can improve the resolution and increase the complexity of the projected images.

In their recent experiments, Hajimiri and his colleagues have used the silicon chip to project images in infrared light, but additional work with different types of semiconductors will also allow the researchers to expand the tiny projector's capabilities into the visible spectrum. "Right now we are using silicon technology, which works better with infrared light. If you want to project visible light, you can take the exact same architecture and do it in what's called compound semiconductor III-V technology," says Firooz Aflatouni, another coauthor on the paper, who in January finished his two-year postdoctoral appointment at Caltech and joined the University of Pennsylvania as an assistant professor. "Silicon is good because it can be easily integrated into electronics, but these other compound semiconductors could be used to do the same thing."

"In the future, this can be incorporated into a phone, and since there is no need for a lens, you can have a phone that acts as a projector all by itself," Hajimiri says. However, although the chip could easily be incorporated into a cell phone, he points out that a tiny projection device can have many applications—including light-based radar systems (called "LIDAR"), which are used in positioning, robotics, geographical measurements, and mapmaking. Such equipment already exists, but current LIDAR technology requires complex, bulky, and expensive equipment—equipment that could be streamlined and simplified to a single chip at a much lower cost.

"But I don't want to limit the device to just a few purposes. The beauty of this thing is that these chips are small and can be made at a very low cost—and this opens up lots of interesting possibilities," he says.

These results were described in a presentation titled "Electronic Two-Dimensional Beam Steering for Integrated Optical Phased Arrays." Along with Hajimiri, Abiri, and Aflatouni, Caltech senior Angad Rekhi also contributed to the work. The study was funded by grants from the Caltech Innovation Initiative, and the Information Science and Technology initiative at Caltech. 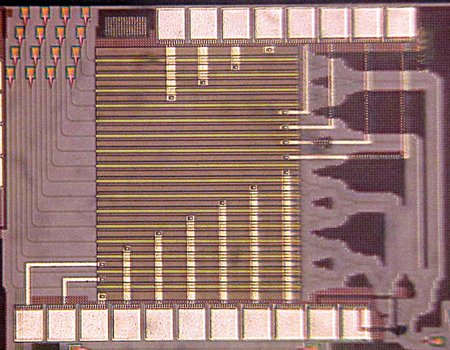 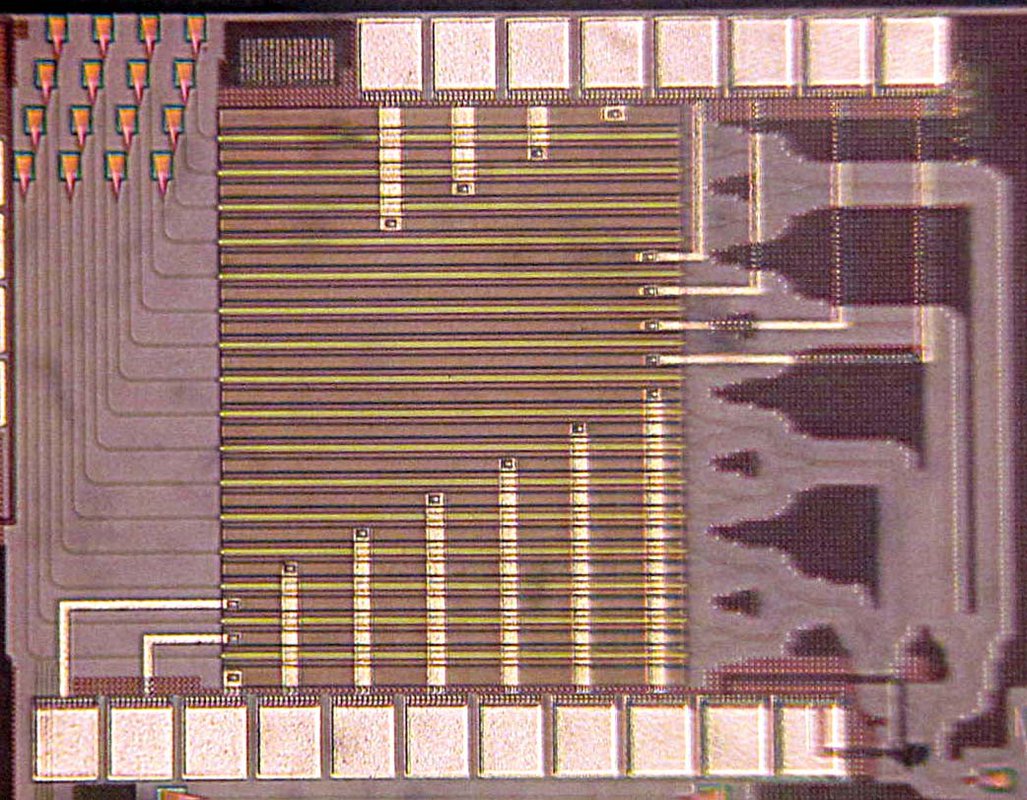 Projections of the letters "CIT" made with the optical phased array (OPA) chip. The projections were made in infrared light.
Credit: Ali Hajimiri/Caltech
Download Full Image